A long, tepid, somewhat unpredictable summer devoid of competitive club football has mercifully come to an end across Europe.

While the Premier League entered its second week, Ligue 1, La Liga, Bundesliga and Serie A had their own respective curtain raisers, and produced a smorgasbord of shock results, which hopefully hints at the potential for an avoidance of straightforward seasons across the major continental leagues.

Bayern Munich have emerged champions every Bundesliga since 2012, Manchester City have won half of the last eight EPL titles, PSG are now just two away from the all-time Ligue 1 record with six league titles in seven years, and Barcelona are La Liga winners of four of the past five seasons.

From the champions of Europe’s Top Five leagues (as assigned by UEFA) across the weekend of August 16-18, Juventus - who have won every single scudetti since 2011 - were the only side to register a win, and that in a friendly against Triestina before the Serie A season begins in a week’s time.

Video Assistant Refereeing reared its head over Eastlands once again. Echoing scenes seen in the Champions League less than half-a-year ago, Cityzens were silenced, rivals jubilated, after the crowd thought Gabriel Jesus’ late, late strike had collected them all three points over Tottenham Hotspur only for the new system to cruelly overrule. 2-2 remained the final scoreline.

In the preceding two seasons, Man City only dropped points on 12 occasions from 76, exactly half of those being draws. It’s not all doom and gloom however; Pep Guardiola’s side drew only their second game in their record-breaking 2017/18 season, at home to Everton, the year they went on to record a historic century of points.

Deja VAR, if you will?

Incumbent Spanish champions Barcelona suffered their first opening day loss in more than a decade at the hands of Athletic Bilbao. The last time this happened was way back in 2008 to CD Numancia; the first league game of the Pep Guardiola era at Barca (which didn’t turn out too shabbily).

Some 11 years later, while Blaugrana’s €120million summer signing Antoine Griezmann was supposed to take the limelight in his debut, a share of the points at San Mamés was snatched away from the visitors by 38-year-old Artiz Aduriz’ immensely impressive bicycle kick as the clock ticked down.

Meanwhile, both Real Madrid and Atlético Madrid, the immovable podium-sharers since 2012, kicked off their own respective campaigns with victories, though both Los Blancos and Los Rojiblancos had the ignominy of receiving dismissals to be reduced to 10-men; the Ballon d’Or winning Luka Modric, and Renan Lodi, respectively.

Rennes were defeated by Paris Saint-Germain in the Trophée des Champions just over a fortnight before they produced what will most likely be the biggest upset of the opening month in any of Europe’s top leagues this season.

In many ways, for their second fixture of the 2019/20 season, this was a better Paris side than the one who turned out in Shenzhen, with Julian Draxler and Angel Di Maria starting. Instead, the result was an exact reversal of the result seen in China; 2-1 to Rennes in only the second gameweek. It means Rennes have claimed the bragging rights over Les Parisiens for the second time in three meetings, following their denial of the Ligue 1 champions for the Coupe de France at the end of April.

PSG only got their initial advantage at the Stade Rennais through virtue of detrimental miscommunication between Damien da Silva and goalkeeper Romain Salin, before being pegged back by M’baye Niang.

The winner for the home side saw a pitch-perfect cross from 16-year-old Eduardo Camavinga find the head of Romain Del Castillo to exquisitely tuck past Alphonse Areola. Rennes were unlucky not to register a third, with only the post denying Jérémy Gelin’s neat flick.

Meanwhile, Olympique Lyonnais, who have finished in the top three in four of the past five Ligue 1 seasons but have seen many of their best players - Tanguy Ndombele, Ferland Mendy, and Nabil Fekir - plundered in the recent transfer window, got off to a blistering start; Les Gones now have nine goals recorded without reply from their first two fixtures to put them top of the pile.

Football on BT Sport
@btsportfootball
Eduardo Camavinga, remember the name 🙌
The 16-year-old put on a stunning display against PSG last night, including this utterly sublime assist for the winner!
We repeat, 16-years old! 👀
140
1353

Hertha Berlin were expected to be a tough nut to crack for champions Bayern Munich, and so it proved. Though Bayern dominated the stats, come 90minutes it had finished 2-2. Robert Lewandowski, bearing down upon Rainer Ohlhauser and Karl-Heinz Rummenigge for silver spot behind the seemingly unreachable Gerd Müller in the all-time Bavarians’ goal-scoring charts, rescued a point from the spot. The penalty was given courtesy of VAR, and combined with comprehensive wins for nearest expected rivals Borussia Dortmund and RB Leipzig, hinted that Bayern’s eighth straight Meisterschale may prove most challenging.

Bundesliga English
@Bundesliga_EN
The first of 34 ✅ 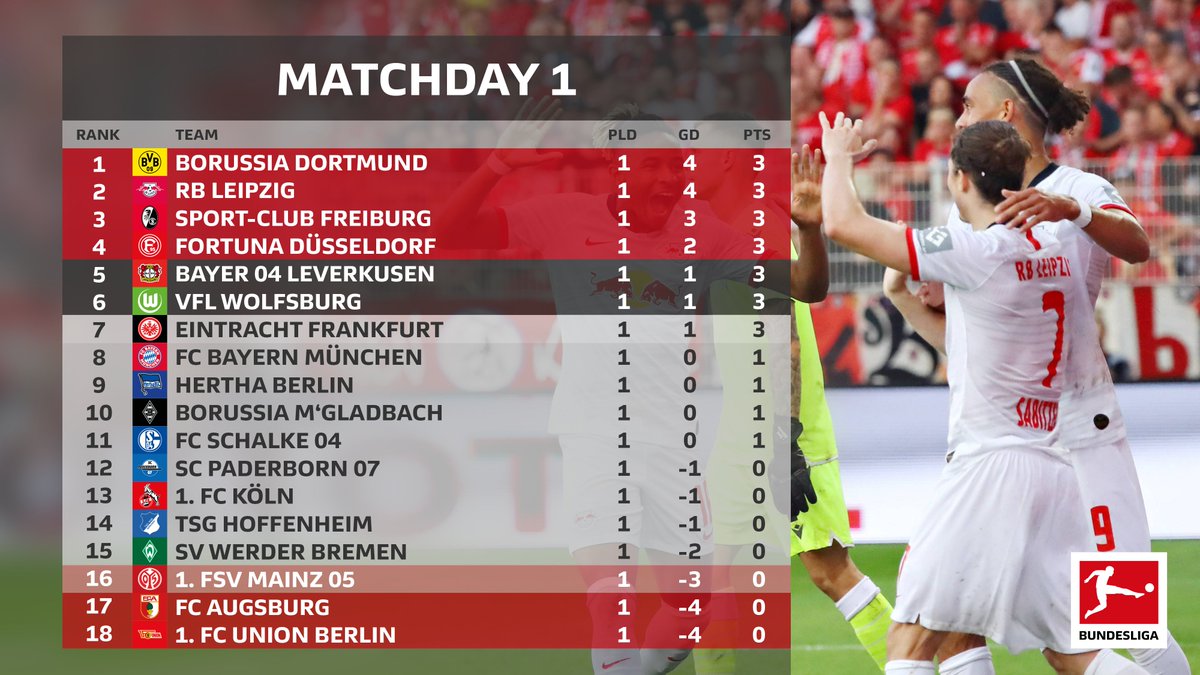