A phenomenal 16 Premier League outfits feature amongst Europe’s 30 highest revenue-generating clubs according to a new study by Deloitte, with Newcastle United returning to the top 20 after a three-year absence following their takeover by Saudi Arabia’s Public Investment Fund.

The 26th edition of Deloitte’s annual Football Money League report into football revenue shows an incredible British dominance, led by Manchester City’s retention of top spot after a €731 million (£619.1m) return in the 2021-22 season. That included a sensational €373m made in commercial income, with just nine per cent (€64m) generated by matchday takings.

Real Madrid remained in second spot, with €713.8m (£604.5m) in revenue, while Liverpool’s run to the final of the Champions League final helped them to leapfrog Manchester United into third, their €314m in broadcast proceeds dwarfing United’s €254m thanks also to their near-miss in the Premier League title race.

After fourth-placed United, Chelsea are the next British club in eighth, with Tottenham Hotspur and Arsenal rounding out the top 10. While West Ham United (15th), Leicester City (17th) and Everton (19th) remain in the top 20, Leeds United (18th) climb back into the chart for the first time since 2002-03 and Newcastle’s new regime have fronted a boost in revenue which sees them sit in 20th. 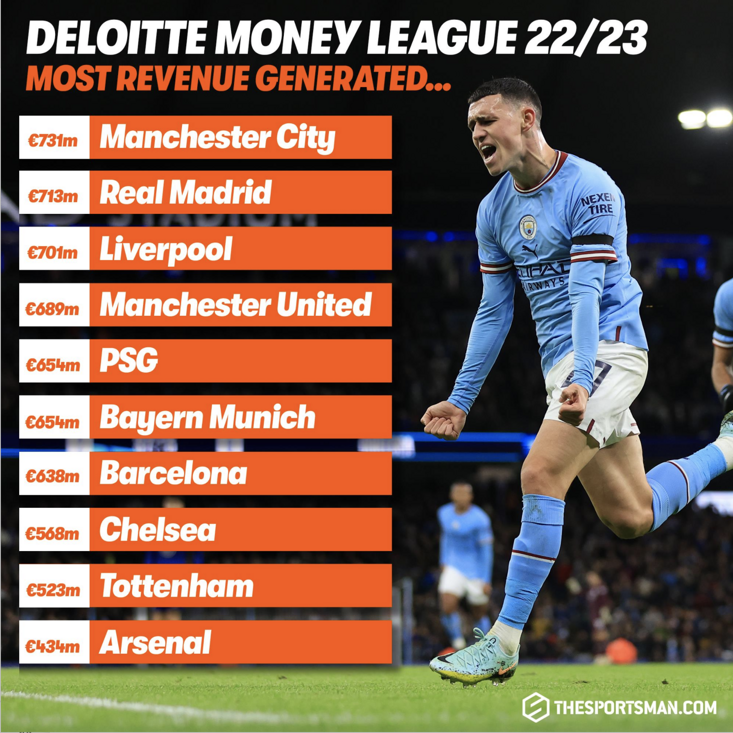 And with Aston Villa, Brighton & Hove Albion, Wolverhampton Wanderers, Crystal Palace and Southampton all placing 30th or higher, the continued riches being made available to Premier League clubs suggests that all 20 English top-flight sides could feature in the top 30 before too long.

There are no Serie A clubs in the top 10 for the first time, with significant crowd restrictions due to Covid-19 combining with poor performances in European competitions leading to a two-place drop to 11th for Juventus, with Inter remaining 14th and AC Milan climbing three places to 16th thanks in part to their league title win.

Meanwhile, Paris Saint-Germain are the only French club in the top 30, making their placing of fifth with €654.2m of total revenue of great concern to the competitive balance of Ligue 1 for years to come. The Parisians’ wages/revenue ratio went up from 91% following the 2021 signing of Lionel Messi from Barcelona, with 2021-22 seeing them spend 111% of their revenue on salaries.