Manchester City took another big step towards that fabled quadruple with a late 2-0 win in the FA Cup quarter-final against Everton at Goodison Park. Ilkay Gundogan popped up with another vital goal as City booked their place at Wembley and kept their dreams of winning all four trophies alive.

It was far from a perfect performance from Pep Guardiola’s Man City side who struggled to break down a resolute side set up by Carlo Ancelotti to play five at the back and attempted to hit City on the counter. This was proved by a fairly drab first half in which City made 344 passes to Everton's 99, although there was little cutting edge.

For Pep, who rotated his side as expected with Kevin De Bruyne, Ederson and John Stones on the bench watched on as his side failed to make the breakthrough, with Raheem Sterling in particular having a poor game in front of goal. He missed the best chance of the game when Fernandinho drove down the middle of the pitch before playing the ball to Sterling who was off colour and missed a good chance hitting the ball at stand-in keeper Joao Virginia.

City’s map to all four trophies will look a lot clearer once the FA Cup semi-final is made, having been drawn up against Borussia Dortmund in the last eight of the Champions League. With the Premier League title all but in the bag, City’s men now just need to beat Tottenham in the League Cup final, win two more FA Cup games and five more Champions League matches to secure the quadruple. 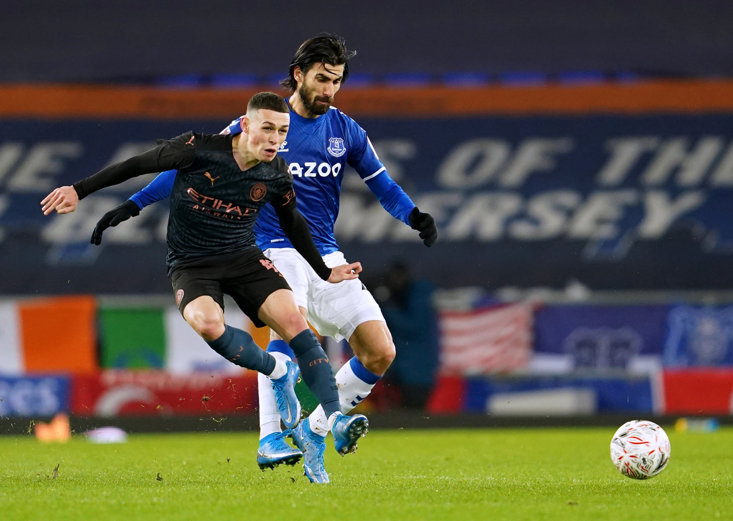 Phil Foden found himself in some clever pockets of space and fired an effort towards goal but they took one giant step forward in this competition when that man again Ilkay Gundogan, headed home a rebound to put the away side in front in the 84th minute. Aymeric Laporte saw his shot tipped onto the bar by Virginia after a strong burst forward but Gundogan stooped low to head in, to the delight of his teammates.

The goalscorer said after the game, “We tried to stay in the game and thankfully it turned out well for us.”

"I think we struggled a little bit to find spaces in the first half. We weren't all together in the right positions. Everton did really well, they defended well and they are a great team, so it's not easy. We knew that we could struggle before the game but we overcame it and we did really well.”

"I just tried to be there waiting for the rebound. I think the timing was perfect - it was a great win. I'm enjoying it at the moment, everyone put in the hard work. This is not a given, it's not granted, so we need to make the right decisions.”

Guardiola showed his versatility when the chips were down by bringing on Kevin De Bruyne before the first goal and Rodri straight after it, and the Spaniard set up the Belgian with his first touch to kill the game off. Mina complained of a high boot as he cleared the ball while Rodri played the ball through and De Bruyne finished with aplomb.

City are on the right track, and it is going to be tough to knock them off course, just don’t mention it to Pep Guardiola...