Football
News
The Cityzens battered Newcastle at the Etihad
Joey Mills
18:26, 08 May 2022

Manchester City’s thoroughly professional performance in beating Newcastle United 5-0 this afternoon could prove pivotal. It was a victory they fashioned against little resistance, having things mostly their own way inside the Etihad. But with title rivals Liverpool only managing to draw with Tottenham Hotspur yesterday, this one-sided affair may retrospectively be highlighted as a decisive moment.

Any notion City would carry a continental hangover into this clash were quickly dispelled. Pep Guardiola’s side found a lot of joy in the Newcastle box, particularly at the right-hand post. Aymeric Laporte stepped up first, overhitting a shot over the bar at a corner. Kevin de Bruyne gave the home side another bite of the cherry with a pinpoint cross. Joao Cancelo was the recipient this time, but he took his shooting cues from his defensive teammate, copying Laporte’s effort by sending his own strike into the stands.

City would find joy with these methods though. A superb Ilkay Gundogan pass into that same right half-space found Cancelo once more. The full-back headed it across goal and Raheem Sterling seized upon the ball to give City the lead. It was an exceptionally well-worked goal that rewarded a considered attacking approach.

Newcastle had been quiet from an offensive standpoint, but at one point it looked like they’d fashioned a response. Chris Wood headed down a corner, triggering a bit of penalty box pinball before tapping in a ricochet. The goal was flagged offside though, City’s organised back line having caught the New Zealander out during his initial header.

You don’t often get more than one chance to lay one on this City side, and Guardiola’s men punished Newcastle’s wastefulness. A Gundogan struck a volley from outside the box, Martin Dubravka spilled a routine save and Laporte was on hand to poke the ball home. Real Madrid looked to have been consigned to the Manchester City rearview.

Sky Sports Premier League
@SkySportsPL
ANOTHER set piece goal for Manchester City ✅
Rodri gets on the end of De Bruyne's corner and it's 3-0! 🔥 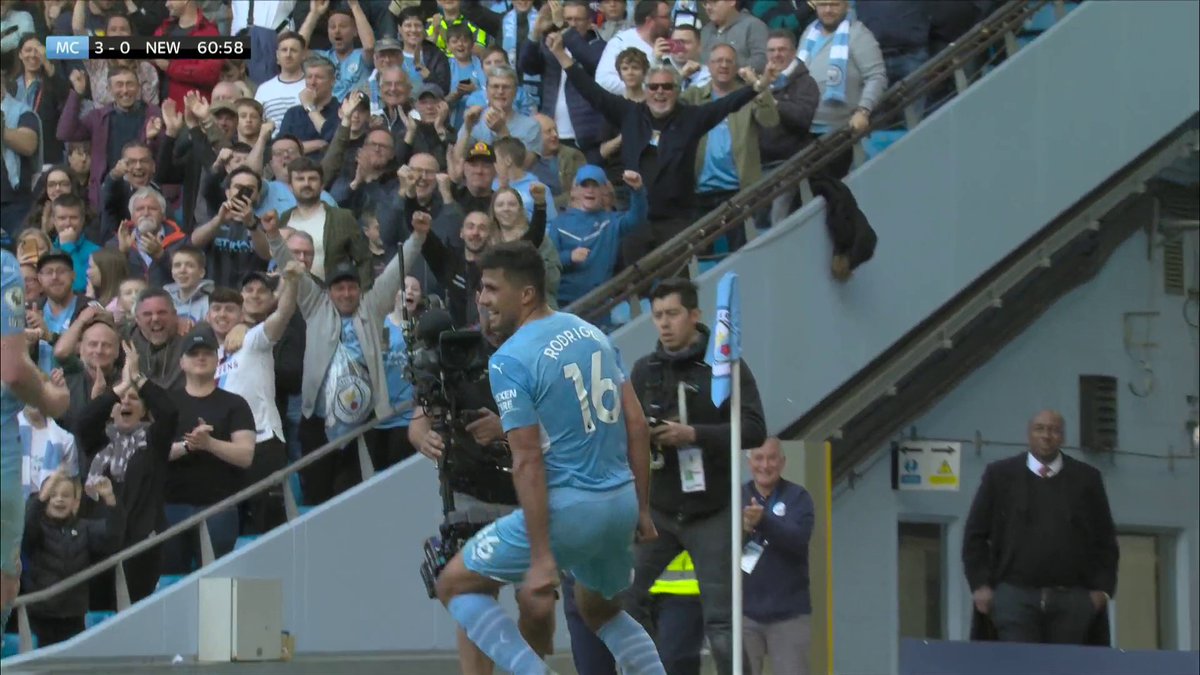 The game began to take on the appearance of a rout in the second half. Rodri’s brilliance from set pieces once again came to the fore. He launched into his signature front-post run for a Kevin de Bruyne corner and powered home his header. Teams know how this Manchester City team are going to hurt them but, like Newcastle today, are often powerless to stop them.

Jack Grealish carved out an inviting opportunity for Oleksandr Zinchenko. The Ukrainian has never scored a league goal for City, but Dubravka ensured that wait will continue. Zinchenko caught it brilliantly, but his swerving shot was acrobatically tipped over by the Newcastle keeper.

Grealish linked well with De Bruyne, who slotted a firm pass into the path of Phil Foden. The England star side-footed it home. On another day it would have been a late bit of gold paint on an already-gilded performance. But with Liverpool breathing down their necks, Foden’s strike acts a third goal separating City from Liverpool in terms of goal difference.

They would extend their goals scored tally further when Raheem Sterling added yet another just before the whistle. Another excellent move taking in Grealish and Foden along the way, it was a shattering moment for an already-battered Newcastle.

As City chase down a sixth Premier League title, Newcastle fans could be forgiven for wondering if one day they will be in amongst such races. With the vast wealth now behind them, and a coach who has improved the team tenfold in just a few short months, it is certainly not outside the realms of possibility. But for now, City and Liverpool remain head and shoulders above the rest. The question is, which one will be above the other come the final day of the season?