Football
News
The two best sides in the league could not be separated at the Etihad
Simon Lillicrap
18:39, 10 Apr 2022

Manchester City and Liverpool shared the spoils once more in an enthralling 2-2 draw that kept Pep Guardiola’s side one point clear at the top of the Premier League table. With just seven games to play, this title race will go down to the wire, but both sides will feel this game was there for the taking.

It was another modern classic. Four goals, another one disallowed for offside and a whole heap of cynical challenges. City dominated the first half and went in at the break 2-1 up, with Liverpool fortunate to still be within touching distance, before the Reds came out flying after the break, levelling things up in just 47 seconds.

Trent Alexander-Arnold struggled defensively in the first 45, but the whole Liverpool side struggled to come to terms with the magnitude of the game they were playing in, over the opening moments.

Just five minutes in, Manchester City got off to a flyer. Kevin De Bruyne ghosted past Fabinho after a quick free-kick and had a left-footed strike from outside the area deflected off Joel Matip, and in off Alisson’s post. It was a touch of fortune, but City smelt blood.

They’ve won 22 games out of 22 when scoring first in the league this season, and they were in no mood to allow their title rivals back into the game early on. Liverpool attempted to press high but couldn’t get on the ball, but then their gamble paid off as Diogo Jota dragged them level against the run of play. Andy Robertson whipped in a wonderful ball to the back post, and Trent Alexander-Arnold sensibly pulled the ball back for Jota to slot the ball home. After just 13 minutes, both teams were on the scoresheet.

Liverpool had calmed down after a frenetic start and were beginning to influence proceedings, although this game was as end-to-end as many predicted. So many big games fail to live up to the hype, yet with the quality on show, these two always entertain.

Virgil van Dijk made a crucial interception from a Kyle Walker cross, before Ederson nearly let the ball go over his own goal line after a poor touch. He was the most composed man in the stadium as he passed the ball away from danger.

But the chances kept coming. Joao Cancelo got on the end of a long ball and fed the ball to De Bruyne who just pulled his shot wide of the near post before Alexander-Arnold tried to score from the halfway line but mis-hit his effort. 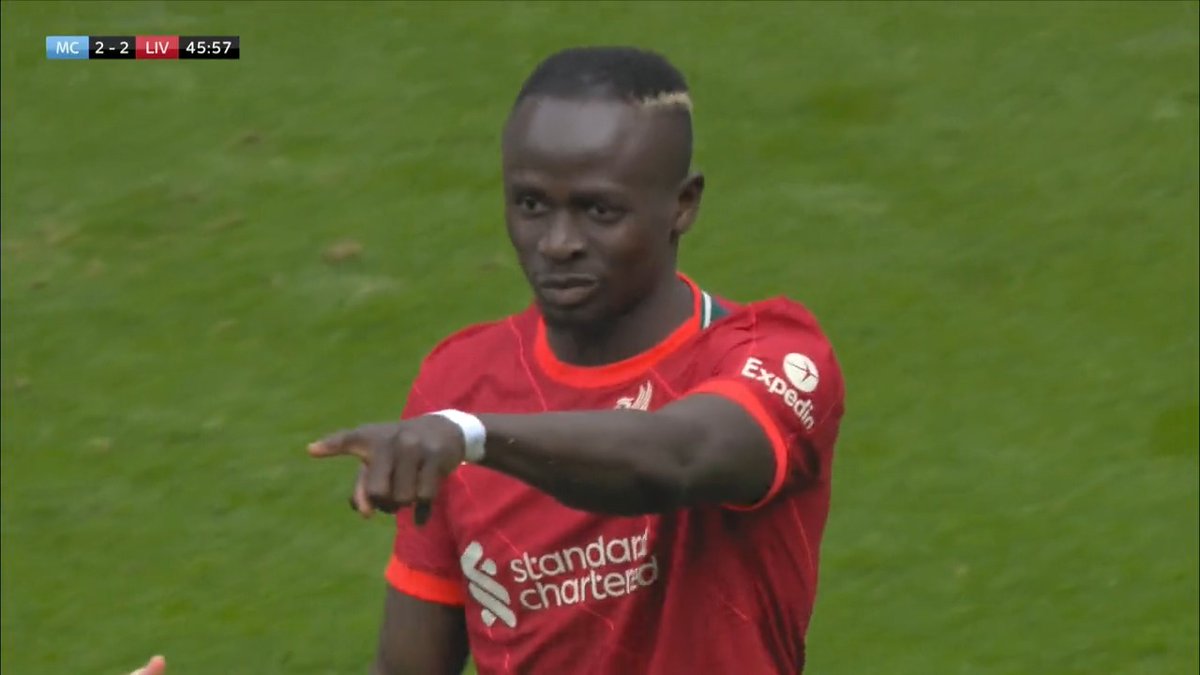 However, Gabriel Jesus would restore City’s lead. He was a surprise selection to start, but as Cancelo whipped the ball from left to right, he timed his run to perfection and finished in off the bar. That was his first league goal in 16 appearances and Pep’s gamble had paid off.

Only a vital touch from Robertson prevented Raheem Sterling making it three before Aymeric Laporte foiled a golden opportunity for Jota.

Klopp must have torn into his underperforming forwards at half-time because less than a minute after the break, Alexander-Arnold found Mo Salah, who had been quiet, and he played Sadio Mane through, who fired past Ederson into the top corner. On his 30th birthday, he bagged himself the perfect gift. This was a topsy-turvy game where Liverpool hadn’t been at their best, but they came out fighting in the second period.

Salah then fed Jota as the intensity rose but he could only poke a weak effort towards Ederson’s goal when he had more time than he realised. City would reassert themselves as Jesus got an effort past Alisson, but Van Dijk was on the line to block his goal bound strike.

Then Liverpool would be caught out by another ball in behind. De Bruyne slipped a ball through for Sterling to run onto and he finished so casually past Alisson, but VAR ruled the goal out for a narrow offside.

Salah had a shot deflected wide while Thiago was lucky to escape a red card after a late challenge on De Bruyne, but his saving grace came as he was fouled moments before his late tackle. Substitute Riyad Mahrez whipped a free-kick onto the post as we entered added time and then he had the golden chance to win it. De Bruyne broke with pace and threaded a wonderful ball through to the Algerian, who went for the chip, but put the ball over the bar.

That was the last chance of a game that ended level, a result that suits Man City given their one point lead at the top. When they met earlier in the season at Anfield it was 2-2, and it was the same scoreline here. The Premier League title will not be decided by the head-to-head meetings, and it is still advantage Man City.

Liverpool are 2/1 to win the Premier League*