Manchester City were the only side to go unbeaten at home in the Women’s Super League last season, but that record has fallen in their first home game of the 2021-22 campaign. Tottenham Hotspur won 2-1 at the Academy Stadium by virtue of a controversial Karima Benameur own goal. The ball appeared to hit Rosella Ayane’s hand before ricocheting off the keeper and into the net. Spurs had drawn level through Rachel Williams just after the hour, after City raced into an early lead through Lauren Hemp.

The team most people expect to rival City for the WSL title, last season’s champions Chelsea, put an emphatic marker down against Everton in a 4-0 win. England stalwart Fran Kirby opened the scoring, before 2020-21 Golden Boot winner Sam Kerr added a second-half brace. Substitute Sam England only needed one touch after coming on to convert Chelsea’s fourth, as the Blues ran riot at Kingsmeadow.

Arsenal followed up their opening-day victory over the champions by matching their score, winning 4-0 at Reading. New coach Jonas Eidevall continues to impress, as Arsenal look like a real force to be reckoned with this season. Vivianne Miedema, who notched her 100th Arsenal goal on Wednesday in a Champions League win over Slavia Prague, added a brace at the Madejski. Jennifer Beattie and Beth Mead grabbed the first two goals in a dominant display. 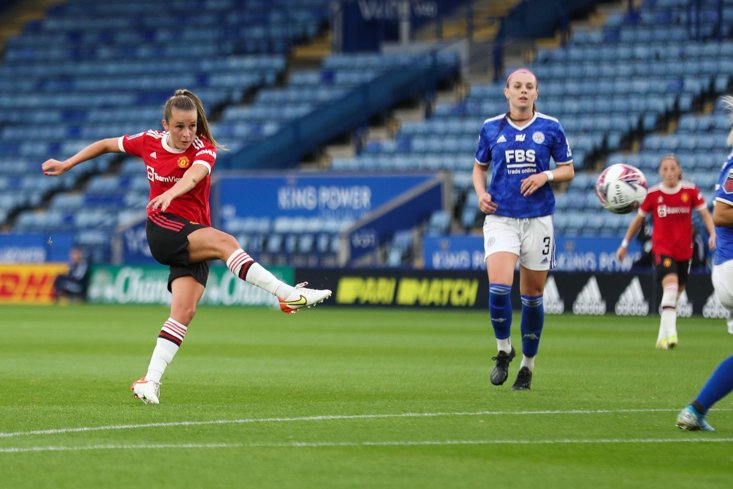 Brighton & Hove Albion are unlikely table-toppers going into the international break. Hope Powell’s side went top with a 5-0 thrashing of Birmingham City at St Andrew’s. Victoria Williams put the visitors ahead in the second minute, and Scott Booth’s side never looked likely to recover. Inessa Kaagman doubled the advantage from the spot, before Danielle Carter scored her first Brighton goal since joining from Reading in the summer. Emma Koivisto and Kayleigh Green pressed home the advantage, and Brighton also registered their second clean sheet of the season.

Manchester United made it two wins from two games under new coach Marc Skinner. The former Birmingham City Women manager replaced Casey Stoney after she stepped down at the end of last season. Newly-promoted Leicester City were their opponents, and the Foxes are still searching for their first win after United defeated them 3-1 at the King Power Stadium. Ella Toone struck first with a sublime long-range effort, before Maria Thorisdottir added a second just after half-time. Former Red Abbie McManus pulled one back for Leicester, but the game was put beyond doubt by United substitute Martha Thomas.

In the only WSL action of Saturday, Remi Allen’s injury-time equaliser rescued a point for Aston Villa at West Ham United. The home side led through an eighth-minute Adriana Leon goal, the Canadian pouncing on a mistake from Anita Asante. This was West Ham’s first WSL strike in over 600 minutes, and will come as a great relief to boss Olli Harder, even if his side could not hold on for all three points.