Football
News
Pep Guardiola’s men are still on for a historic treble after beating PSG 2-0 at the Etihad
Kieran Spratt
22:16, 04 May 2021

Manchester City have reached their first ever Champions League final after beating Paris Saint-Germain 2-0 (4-1 agg) at the Etihad, keeping their treble dreams alive in the process.

Following on from their 2-1 win in the French capital last week, a brace from Riyad Mahrez was enough to ensure the Cityzen’s will play in their first UEFA European final since winning the Cup Winners' Cup 51 years ago.

With torrential rain and hale plaguing the pitch, the playing conditions were hardly befitting of a Champions League semi-final - the ball was struggling to get any momentum going and it was clearly proving tricky for the players to get a grip on it. Fittingly then, the opening moments of the game were as chaotic as the weather raging above Manchester.

Seven minutes into the game, the referee awarded PSG a penalty after Oleksandr Zinchenko had allegedly handled the ball in the box. The ball had clearly come off his shoulder and thankfully, after some VAR intervention, the penalty was ruled out. Moments later, a moment of pure brilliance from Ederson showed why he is one of the best playmaking goalkeepers in the world, as he played a pivotal role in City’s opener.

Kicking off the attack, the Brazilian launched a wonderful long ball forward to release Zinchenko on the left. The Ukrainian promptly found his way to the left edge of the PSG box before cutting a ball back to Kevin De Bruyne. The Belgian got a shot away, but the strike was blocked and the rebound fell to Mahrez, who promptly slid the ball under Navas from a tight angle to give the hosts a valuable lead.

City took a giant step into the final through that man Mahrez once again shortly after the hour mark, and this one was pure class. De Bruyne slipped in an inch-perfect pass for Phil Foden. The England international, who was simply phenomenal tonight, rolled the ball across the face of goal to leave it on a plate for Mahrez, who lifted the ball into the roof of the net for his second of the evening. 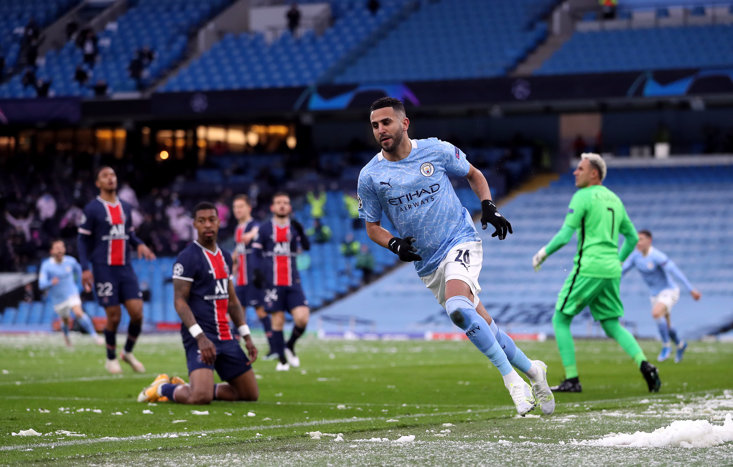 The assist means that Foden is the sixth different Premier League player to record double figures for both goals (14) and assists (10) in all competitions this season.

There was always a bit of bite behind this game from the opening whistle, but things started to really get feisty at 2-0. Former Manchester United star Angel Di Maria was given his marching orders, leaving the Parisians with 10-men and little hope of getting back into the tie, for booting Fernandinho off the pitch. Just what did Sir Alex Ferguson tell the PSG team when he visited them at their hotel today? PSG frustrations continued to flare and Marco Verratti was cautioned for a late challenge on Foden. Paredes then flicked the ball at Foden, sparking a reaction from Zinchenko.

It was another exceptional performance across the park for Pep Guardiola’s men. In particular though, Ruben Dias. While it was a comfortable win, Dias was emphatic at the back tonight, nullifying PSG’s attack across the 90 minutes. Foden, too, was phenomenal, reiterating how important he will be England’s Euro 2020 hopes this summer with a phenomenal shift on a historic night for the club.

Though the unprecedented quadruple might have eluded them this season, with the League Cup in the bag, the Premier League all but wrapped-up, and a place in Europe’s premiere competition confirmed, Pep Guardiola’s men find themselves still within reach of a historic treble.

They will play either Chelsea or Real Madrid in the final in Istanbul on May 29. Tonight's win broke the record for the longest winning run by an English club in European Cup history - can they go one further?