Football
News
United fell to their fifth straight away defeat after being beaten 4-0 by Brighton at the Amex Stadium
Kieran Spratt
19:35, 07 May 2022

Manchester United fell to their fifth straight away defeat in the Premier League as they were run off the pitch by a brilliant Brighton & Hove Albion, losing 4-0.

In a season to forget for Ralf Rangnick’s side, they hit their lowest ebb in front of a record attendance at the Amex Stadium on Saturday evening. They looked utterly disinterested, devoid of any passion and already on the beach as they were totally outclassed by the Seagulls.

Brighton, who hadn’t won at home since Boxing Day, were full of confidence and a first-ever top half finish looks very much on the cards for Graham Potter’s side, while United will finish the season with their lowest-ever points tally and any sniff of a top four finish has now vanished.

The hosts started brightly and broke the deadlock in the 15th minute through Moises Caicedo. The ball dropped to Pascal Gross from about 22 yards out and his strike was blocked out as far as the Ecuadorian who followed up with a fantastic low strike from range, through Victor Lindelof’s legs, for his first Brighton goal. 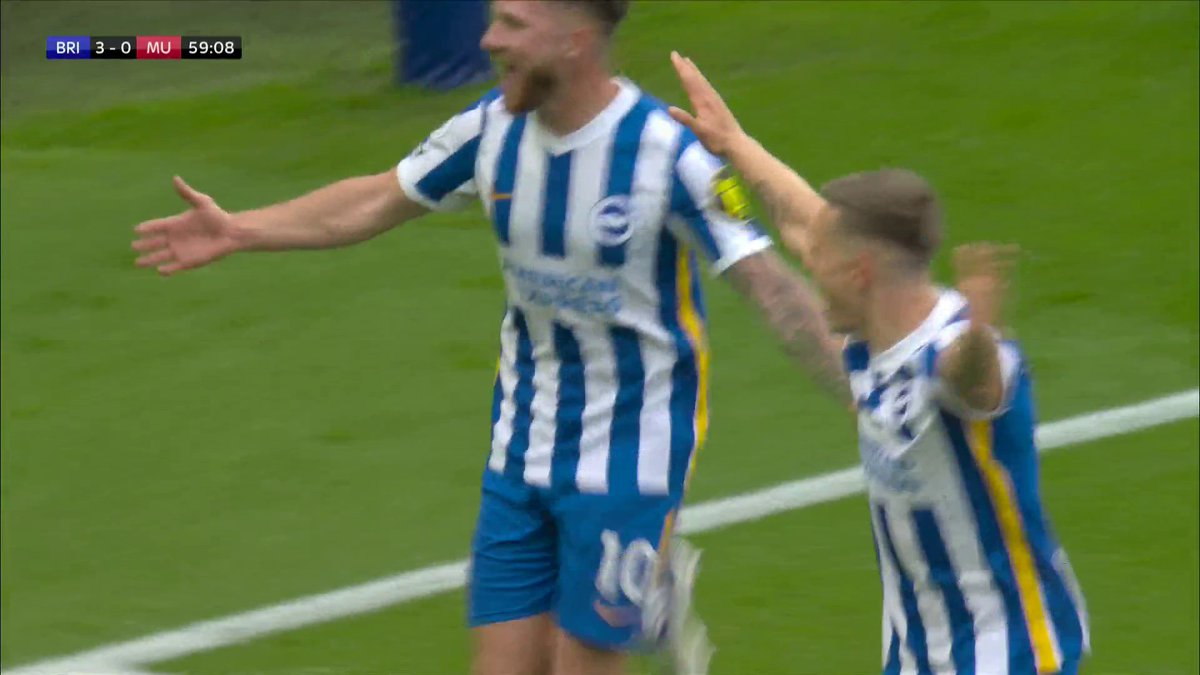 Danny Welbeck has some good form against his old club and the former Red Devil nearly made it four goals in nine league matches against the visitors. Raphael Varane’s shanked clearance fell perfectly for the striker who found himself one-on-one with David De Gea, but ultimately put too much power on his lofted effort.

Brighton doubled their lead after the break, courtesy of another first-time scorer. Marc Cucurella ran onto a cutback from Leandro Trossard and thumped a shot into the roof of the net. The nightmare got worse for United when Robert Sanchez played a superb ball down the left to Cucurella, who in turn fed Trossard to tee up Gross to make it 3-0.

Trossard is enjoying his best scoring season for Brighton and became their joint top scorer on the hour mark. Welbeck was the architect, making a fine run in behind the defence. His chipped finish was cleared off the line by Diogo Dalot but Trossard was there to scramble home. The Belgian’s fourth goal in five league matches prompted chants of ‘you're not fit to wear the shirt’ from some of the travelling fans.

The future's looking bright for the Seagull's who, after a historic night in the club's history, are on course for their best ever season. For United, Erik ten Hag's arrival can't come soon enough, although the Dutchman's rebuilding job at Old Trafford is looking trickier with each passing game. They have one more match remaining of the Ralf Rangnick era when they travel to Crystal Palace on May 22nd.

Speaking after the defeat, Rangnick told Sky Sports: "It was a terrible performance. From the first until the last minute it was not enough; we can only apologise for this performance and a humiliating defeat. [Monday's win over Brentford] was a different game, we just gave too much time and space. We were never in a position where we could stop them playing through our lines, We told the players be as compact as they could but we couldn't stop it.

"I don't think they ignored the gameplan but we weren't able to stop them. We gave them too much space and if you do that against a technically good team like Brighton, you will get punished."