Fred played the striker in and it was a goal. However, it was Kelechi Iheanacho who latched onto the Manchester United midfielder’s pass to put Leicester ahead in Sunday’s FA Cup quarter-final. The centre of the park proved to be an issue for the Red Devils all afternoon and Ole Gunnar Solskjaer’s men are out of the competition after losing 3-1.

Brazilian Fred was selected with Nemanja Matic while Donny van de Beek was also handed a rare start with Paul Pogba in an advanced role. However, they couldn’t match the industry and guile of Foxes duo Youri Tielemans and Wilfred Ndidi, who himself has been linked with a move to Old Trafford in the past.

Here, at the King Power Stadium, Matic and Fred were not allowed to control or dictate the game. When the team is dominating, they keep the play ticking over and can tackle and move the ball. However, against Leicester, it felt United were off the pace in the middle, harassed and harried. They badly missed the spark and magic of Bruno Fernandes, too, who started on the bench.

It was Fred’s lack of concentration which put United behind. The former Shakhtar Donetsk man played the ball back in the direction of goalkeeper Dean Henderson but it was short and far too dangerous. Iheanacho was in like a shot and rounded the Red Devils stopper to put the ball into the net on 24 minutes. They had been caught far too easily. 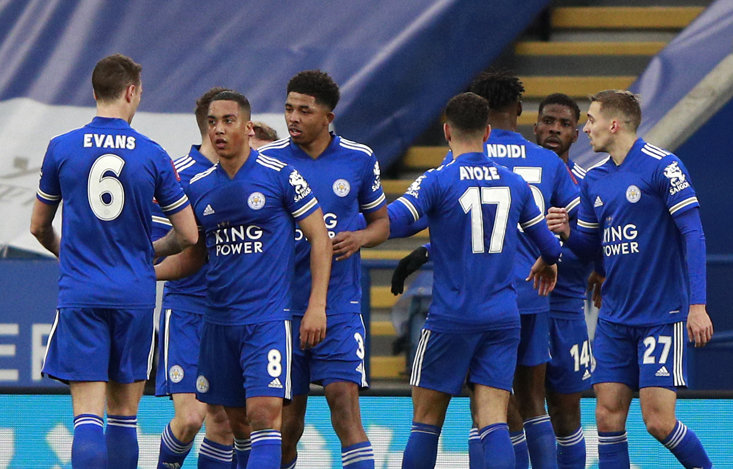 However, the attacking talents Manchester United possess mean they are always in the game and they replied on 38 minutes. This time, United’s more attack-minded middle men Pogba and Van de Beek combined, with the former crossing and the latter dummying the ball for Mason Greenwood to lash the ball home.

Solskjaer’s side were behind again though only seven minutes after the restart, and the midfield was this time joined by the defence in not doing enough. Leicester’s Tielemans picked up the ball on the centre circle and played the ball to Iheanacho who played it straight back. The midfielder was then afforded the entire pitch to maraud into and nobody got close. He kept running and running and then hit a low shot into the bottom corner to restore the Foxes lead.

Soon, Fernandes was introduced. It was no surprise to see Matic subbed, along with Pogba, Van de Beek and Alex Telles who also made way in a quadruple change. Instantly there was more balance in the side with Scott McTominay also coming on with striker Edinson Cavani and left-back Luke Shaw.

Now, McTominay could do the dirty work, get the ball moving and allow Fernandes to dictate further forward. But it was too late. The damage had been done and United, looking bruised and tired, conceded from a free-kick at the back post as Iheanacho headed home unmarked with twelve minutes to go.

Fernandes had a good chance late on, of course he did, curling a free-kick from distance but it was saved well by Kasper Schmeichel.

“Of course, we’re disappointed we’re out but probably it’s just the sum of all the factors and all the games we’ve played lately, all the injuries," said manager Solskjaer after the game. "I don’t want to make excuses but I try to find an explanation and an explanation is we had a few players coming back who have not really trained a lot.

"They’ve not played for a while and there are others who have played a lot but lacked a little zip and energy that we normally see. We conceded easy goals we don’t normally concede and it’s difficult against a good team like Leicester.”

United fans will want to see more energy and control in midfield going forward and reinforcements will be needed. Bruno Fernandes has to play too, he truly is the beating heart of this team. Not starting him meant the Red Devils lost the midfield battle and they are out of the FA Cup. They will have to do more in the Europa League if they are to lift silverware this campaign.

Leicester, meanwhile, march on and will face Southampton at Wembley in the semi-finals while Manchester will take on Chelsea in the other last four match.