Due to the thick fog that came in at Selhurst Park, it was a small struggle to see the second half all that clearly. It was probably for the best. A lifeless United performance failed to gain any momentum over the 90 minutes and if Crystal Palace had shown any sort of ruthlessness in front of goal, they surely would have taken all three points.

That 0-0 was the club's 27th since Sir Alex Ferguson retired, more than any other side in the top flight, and things are starting to look bleak for Manchester United ahead of the derby this weekend, not just because City’s lead over them is now 14 points. They will now travel to a ground which has been a happy hunting ground for Ole Gunnar Solskjaer during his time in charge, but if they play anything like they did tonight, it will be a massacre.

A wasteful Crystal Palace, still without star man Wilfried Zaha due to his hamstring injury, relied on Christian Benteke, Andros Townsend and Jordan Ayew to create chances. Their best moments came as United’s back line were wasteful in possession, yet through a combination of the aforementioned three, they were unable to test Dean Henderson. Eric Bailly, who was selected instead of Victor Lindelof was wasteful while Harry Maguire also misplaced passes under little pressure. 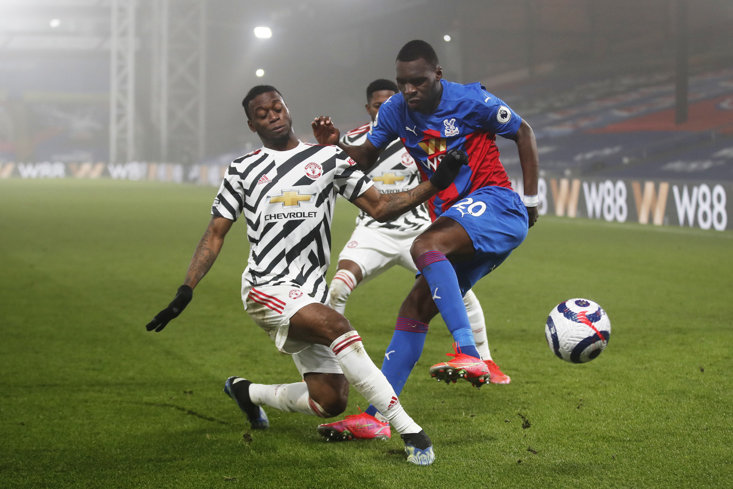 Palace didn’t make them pay. City will. As we have seen during their winning run, the cynical ruthlessness Pep Guardiola’s sides are known for is back with a vengeance. Raheem Sterling, Riyad Mahrez and even Gabriel Jesus are all looking clinical and Solskjaer’s defenders could find themselves in all sorts of trouble if they repeat tonight’s performance on Sunday afternoon.

With Bruno Fernandes, Marcus Rashford and Mason Greenwood all starting, it was set to be an exciting attacking performance from Solskjaer’s side, with Edinson Cavani returning to the eleven to lead the line. However, Vicente Guaita got through the 90 minutes relatively unscathed aside from one save he made from a deflected Nemanja Matic effort in the first half.

Townsend was the brightest spark for Palace and saw his efforts almost rewarded as his shot was saved but the biggest chance fell to Patrick van Aanholt late on, as he was denied by Henderson who will be delighted with his own personal performance. On a second glance it looked as if VAR may have ruled the goal out for offside anyway. Sigh.

Speaking after the match, Solskjaer said, "The tempo was missing, once in a while it happens. It wasn't one of our best nights that's for sure."

Having won three of their last four games at the Etihad and clearly looking a much more dangerous team when they can counter-attack on a side that can keep possession, United do suit playing against the juggernaut that is Pep Guardiola’s Manchester City. The Citizens have now won 21 games in a row in all competitions and look almost invincible, but United have proved once before they love nothing more than to spoil their neighbour’s party.

This performance will worry a few onlookers. United, despite now being unbeaten in their last 21 away games in the league, an outrageous achievement, will go into the derby as underdogs. But that is just the way they like it. A heavy defeat at the Etihad could have this Man Utd team, who were title challengers last month, looking over their shoulder in the hope of holding onto a top four place. A win wouldn’t bring the title race back to life, but it would be oh so sweet for the Old Trafford faithful.