Even the wins don’t quieten down the criticism of Manchester United’s midfield. Fans and pundits quickly picked through the rubble of the Red Devils’ last-gasp 3-2 win over Atalanta on Wednesday, and much of the criticism was aimed at their midfield. On this occasion it was Fred and Scott McTominay, the famed “McFred” pivot, that drew the ire. But in truth, almost every discernable combination has been the butt of a certain amount of negativity this season, as Ole Gunnar Solskjaer continues to coach a side that relies on individual brilliance rather than structural balance.

But do Manchester United have the makings of a solid midfield in their ranks? One that can at the very least provide a base for the attacking firepower they possess? The Sportsman takes a look at some possible combinations and what they mean for Solskjaer’s shaky Reds.

Starting with the most recent pairing, United fans know what they are getting with this occasionally-gruesome twosome. Stability is the watch-word, with Scott McTominay’s physicality and ability to run the ball supposed to complement the Brazilian’s whirling-dervish approach to defensive midfield.

The issue with this pairing is that if you’re only set up to do one thing, in this case stop the opposition playing, if that fails you have no other use. Neither is a particularly creative passer, though McTominay did play a couple of nice balls through the lines midweek. Neither is an orthodox defensive midfielder either. United’s de facto most defensive pairing features one player who looks more effective box-to-box, and another whose manic freneticism means he can’t be relied upon to do the mopping up. Which leads us on to...

Nemanja Matic can do the aforementioned mopping up, and has done so extremely well in a career that has seen him lift two Premier League titles. The issue being, they were both for Chelsea, and rather than that midfield powerhouse, United have a far-slower 33 year old version in their squad.

This is not to denigrate his contributions, and in the right games he still has an impact now for United. McTominay is the safer option for a partner here, as he has positional awareness that Fred lacks. The Brazilian is prone to ball-chasing a little too often to effectively play alongside a partner who lacks the speed to cover the space left behind. 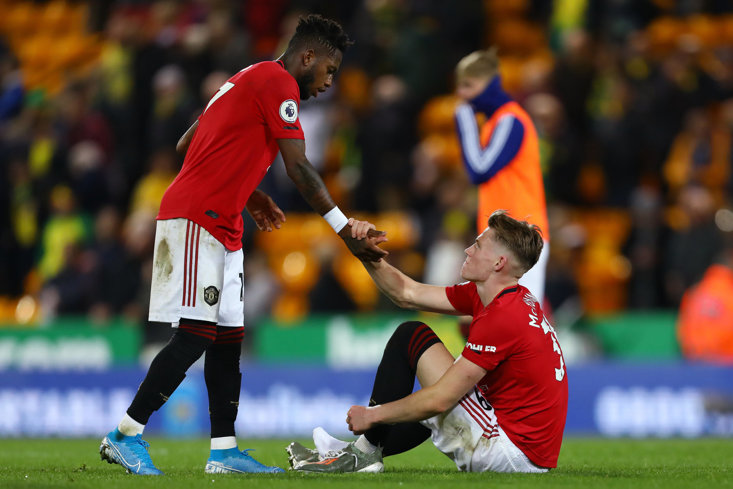 We now get to the heart of United’s midfield issues. How do you solve a problem like Paul Pogba? The prevailing answer you hear is that you do not play him in a two-man midfield. Whether it’s Matic’s one-paced play, Fred’s irresponsible chasing or McTominay’s lack of out-and-out defensive pedigree, United do not have a partner that can cover for Pogba.

However, he is a player worth covering for. He has notched seven assists so far this season and is a vital creative cog in Solskjaer’s machine. But at the moment he is a man without a role. His temporary left-sided berth has been ceded to the returning Marcus Rashford, and with United sticking rigidly to 4-2-3-1, he has struggled to fit in. But it wasn’t supposed to be this way.

Reports coming out of Carrington during pre-season suggested United were experimenting with a 4-3-3 formation. At the time, it was easy to see why. This would be a possible way to get Pogba and Fernandes working more effectively in the same team, without the need for a complete defensive midfielder to carry the load. Instead, flaws such as Matic’s speed, or McTominay’s discipline could be mitigated by a smaller remit for whoever played the deep-lying role. Stay in front of the defence, mop up, let the big two run riot in front of you.

This formation was even seen as a way Donny van de Beek might find his way into Solskjaer’s plans. The former Ajax midfielder has barely been used by the Norwegian since arriving last summer, mainly because his favoured number-ten role is the permanent residence of Fernandes, and he is not ideally-suited to a deeper position. When he has been used there in emergencies, he has looked okay. He is more positionally-aware than Pogba, but feels less cut out for defensive work than some of his peers.

The plan was shelved when the somewhat seat-of-the-pants capture of Cristiano Ronaldo was completed. A quality addition to be sure, but a player who famously does not press and rarely tracks back. The idea of fielding one midfielder behind a pair of attacking playmakers, two wingers and an aging centre-forward who doesn’t defend suddenly looked kamikaze.

That’s not to say it will not return, but do not expect to see it with the current personnel. If this idea is to be resurrected, it will have to be after the signing of a midfield specialist.

For now, it does not look like there is any clear solution to United’s midfield woes. It would be churlish to suggest they don’t have talent in the position, any club that can afford to bench van de Beek or save Matic for emergencies is blessed with some degree of midfield talent. But the balance is all wrong, and this is something United should have addressed in the summer. The signings United made were headline-grabbing for sure, but the club will be making the back pages for the wrong reasons if they don’t find a midfield combination that gets the best out of their talented individuals.