Football
News
David De Gea, meanwhile, looks like he could be the frontrunner for Man Utd's number one goalkeeper position
Kieran Spratt
20:41, 18 May 2021

Old Trafford welcomed 10,000 fans back to the Theatre of Dreams after a whopping 436 day wait but it wasn’t to be the winning return they’d have hoped for after drawing 1-1 with already relegated Fulham, despite dominating the majority of the match.

Ole Gunnar Solskjaer’s side head into a Europa League final against Villarreal in eight days and this wouldn’t have been the ideal way in which he would have liked to have shaped up for it after a toothless second half performance.

David De Gea, making just his second Premier League appearance since February, made a surprise appearance in the starting eleven which looks to have strengthened his position as the club’s number one heading into the new season and that all-important final.

With reports suggesting Dean Henderson will only stay with the club next season if he is Solskjaer's number one keeper, the selection of De Gea against Fulham, and his likely inclusion in the starting line-up against Villarreal, seems to signal that the Spaniard is the frontrunner. The 30-year-old was pivotal in United’s opener and, while he didn’t get a clean sheet, there was nothing he could have done about Fulham’s equaliser.

A moment of pure quality from Edinson Cavani opened the scoring for Solskjaer’s side in the first-half. After being released by De Gea, the in-form Uruguayan spotted Alphonse Areola off his line and chipped the Fulham goalkeeper from about 45 yards out. It was a fitting first goal for the returning supporters at Old Trafford and the noise they created in celebration was enough to bring goosebumps to any football fan. 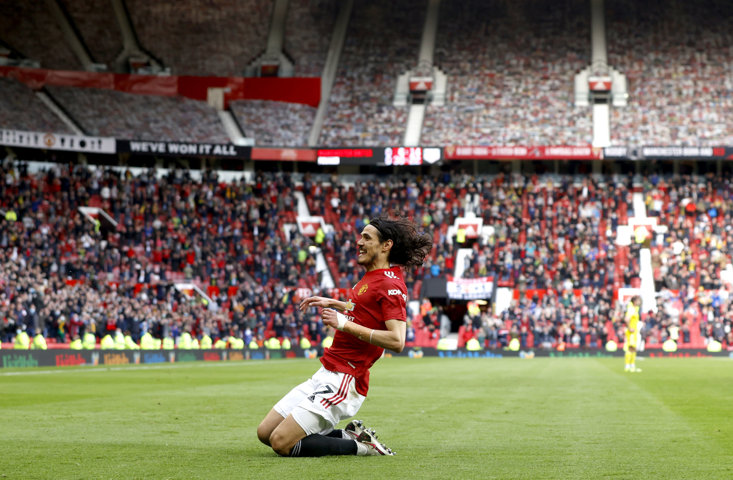 But Fulham had threatened to punish United’s complacency and got their reward in the 76th minute through Joe Bryan, with the left-back heading past De Gea from a Bobby Decordova-Reid cross.

The equaliser seemed to knock the stuffing out of a United side who’d been on the front foot for the most part and the Red Devils never really looked like going back in front. As Sky Sports pundit and former club legend Gary Neville pointed out, the club now seem to be “stumbling” towards the final, with two defeats and a draw in their last three at home.

The club have now dropped ten points from winning positions at Old Trafford this season, their highest ever such total at home in a Premier League season, and have conceded 28 home goals, the most since the 1962-63 season (38).

Speaking after the match, Manchester United's Player of the Year, Bruno Fernandes, said, "We pressed a lot. We had many chances to do it but we don't do it. You shoot, you try and the ball doesn't go in but sometimes that happens. We'll put our heads down and focus on the next game."

United now go to Wolves on Sunday for the final game of the season before that Europa League final just three days later. Fulham, meanwhile, host Newcastle United before they return to the Championship.