Football
News
The Sportsman team have picked from a full domestic calendar for a tasty accumulator
TheSportsman
15:01, 09 Sep 2021

Another weekend brings another accumulator from The Sportsman. Our disappointing return last time out hasn't put us off as we look for a mix of dead certs and more adventurous selections, so hopefully this will be the week when a big seven-fold win comes our way.

Here is this week’s Super Seven accumulator priced at 681/1 with Betfred.

Manchester United haven't got a brilliant recent record when it comes to the start of matches against Newcastle United, with the Magpies scoring first in six of the last eight Premier League encounters between the pair. If they can make a similar start at Old Trafford on Saturday, a United turnaround from a half-time draw is a good bet.

Fulham are the best team in the Championship this season and it would take something remarkable for them not to finish in the top two this term. There’s also some talk already that they could break Reading’s record of 106 points on their way to the title. They should comfortably beat Blackpool.

Hearts have made a successful return to the Premiership and have the home advantage against their Edinburgh rivals. This game is set to be a thriller with both sides unbeaten and sitting top of the table, but I see the Jam Tarts having the edge over Hibs.

Wolves have so far been unlucky in the Premier League under Bruno Lage. They have played well and created numerous chances and I feel that this will be the game where they finally get off the mark. 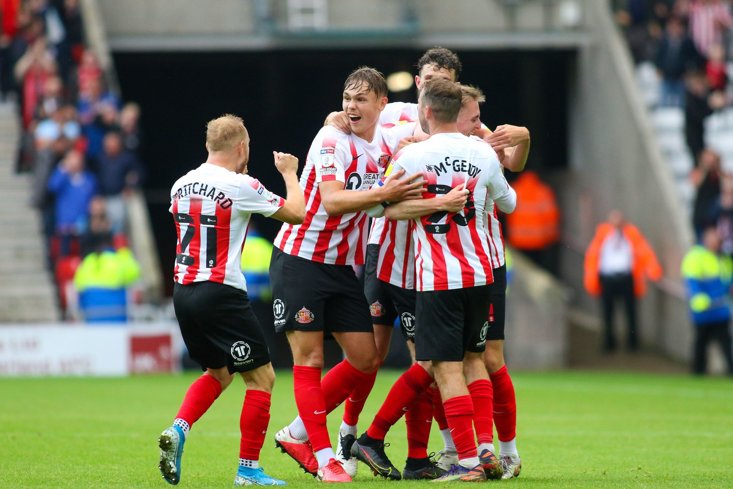 SUNDERLAND HAVE STARTED WELL BUT HAVE ALSO TENDED TO CONCEDE

This weekend sees first and second in League One go head-to-head and I think Sunderland are good value to extend their lead at the top of the table. The Mackems have seen both sides score in eight of their last 10 home games in the league and are undefeated in their last five at the Stadium of Light. Accrington meanwhile have only failed to score in one of their six league games this season (vs MK Dons).

After a perfect start that saw four wins from four, Forest Green have had a difficult couple of weeks. A 2-0 loss at home to Port Vale ended their unbeaten run before a 0-0 draw at Exeter took them to second in the league. These two sides met in the Papa John’s Trophy in midweek and the Cobblers won on penalties, but I’m backing a strong FGR side to get back on track here in front of their home fans.

Walsall have a draw and a victory in their last two games, and they look to be finding their feet under Matty Taylor. They host a Mansfield side that have lost three on the spin, so if the Saddlers can make the most of their form, they should pile on more misery for Nigel Clough.