Football
News
The chance to win five League Cups in a row has disappeared for Pep Guardiola
Simon Lillicrap
22:10, 27 Oct 2021

Five years and a day since they last lost in this competition, Manchester City tasted defeat once again as West Ham United beat them 5-3 on penalties after a 0-0 draw in normal time. This has been an unprecedented era of dominance as Pep Guardiola’s City side have cantered to the last four League Cup titles - but there will be a new name on the three-handled cup in 2022.

That name could well be West Ham’s, who having knocked out Manchester United at Old Trafford in the last round, put in a perfect defensive display against their cross-city rivals. David Moyes once again got his tactics spot on, as his side sat incredibly deep and frustrated City, before his players didn’t miss a beat when it came to the spot-kicks.

Having beaten Chelsea in the final on penalties in 2019 and winning the competition via the same method against Liverpool in 2016, the Citizens would have been full of confidence heading into this one, but Phil Foden missed the target with their opening attempt and the Hammers took full advantage.

The draw, which will take place on Saturday morning will feature City’s Premier League title rivals Liverpool after they came through a testing night at Deepdale with a 2-0 victory. Preston had a flurry of chances in the first half as Sean Maguire saw his shot somehow stopped from seven yards by Adrian, before Neco Williams blocked a shot off the line and then Brad Potts fired over, all within the space of a few seconds. For all of Liverpool’s domination on the ball, it was the Championship side that carved out the best opportunities in the opening period.

Neco Williams finally created an opening for the Reds, who were backed by a 5,000 strong away support and Takumi Minamino used his clever movement to nip in front of his defender and turn the ball in, to the delight of those behind the goal. In a stronger second half which will please Jurgen Klopp, Kostas Tsimikas saw his cross hit the bar late on but the ball once again dropped to Williams who saw his shot blocked, and as the ball span up to Divock Origi, he backheeled the ball mid-air, past a helpless Declan Rudd. That’s Origi’s 11th goal in 15 matches in this competition and having scored in the Champions League final, it does feel as if he is underused, even if he is not underappreciated by the Liverpool faithful.

Liverpool FC
@LFC
Into the Quarter Finals we go! 🙌🔴
#PNELIV 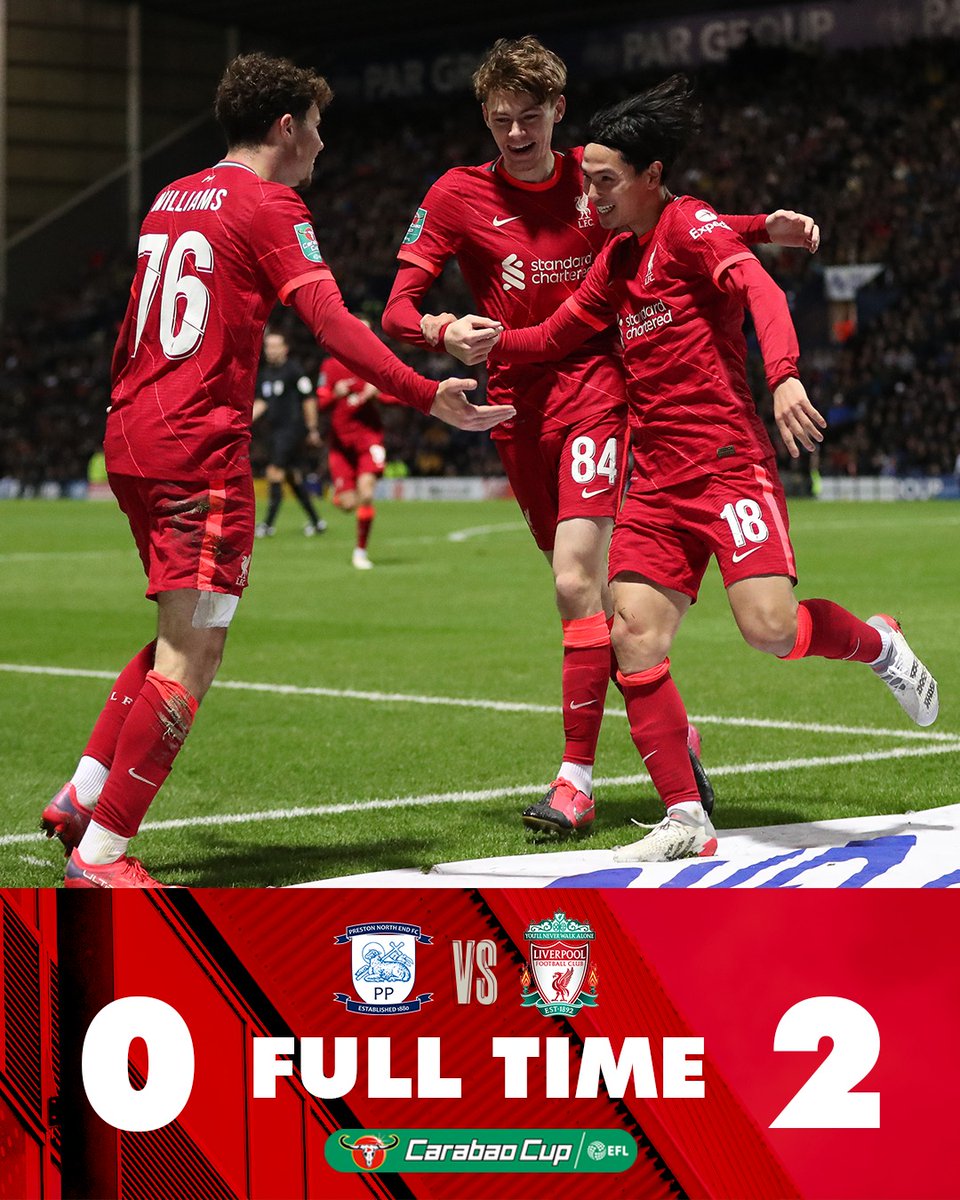 At Leicester there was drama before the half-time whistle as having gone 1-0 in front thanks to a Harvey Barnes goal, Brighton equalised seconds before the break through Adam Webster. However, from kick-off, Ademola Lookman capitalised on a loose back pass to restore the Foxes lead. Enock Mwepu bagged an equaliser for the Seagulls but ultimately it was Leicester that progressed after a penalty shootout.

On an emotional day, three years on from the passing of Vichai Srivaddhanaprabha, Leicester booked their place in the quarter-final as they look to add the Carabao Cup to the FA Cup they won last term.

Brentford continued their impressive start to the season as they secured a last eight place with a 2-1 win at Stoke City, with goals from Ivan Toney and Sergi Canos enough to keep them alive in this competition. Tottenham Hotspur bounced back from their weekend defeat to West Ham with a 1-0 win at Turf Moor with Lucas Moura getting the only goal of the game. Last year’s finalists, who bizarrely sacked Jose Mourinho in the days leading up to the final will be hoping to reach Wembley again this time around.

But the big news is that the holders, and kings of this competition for so long are out. The cup has now opened up, Chelsea, West Ham and Liverpool are well in with a shout and Sunderland are the only EFL representatives in the last eight. We’ll find out how the draw pans out on Soccer AM but the Manchester City era in the Carabao Cup - for now - is over.