It’s advantage Manchester City in their Champions League semi-final tie with Paris Saint-Germain after they earned a massive 2-1 victory in the French capital on Wednesday night, scoring two vital away goals courtesy of Kevin De Bruyne and Riyad Mahrez.

PSG took the lead through talismanic captain Marquinhos after only 15 minutes. Both sides had tried to work chances, both sides possessing scarily talented attacks as every foray forward looked like the build-up to another goal. It was the French giants though who got it over the line from a corner. Former Manchester United playmaker Angel Di Maria put the ball in and Marquinhos got a march on Ruben Dias and guided the ball past Ederson with his head. The City goalkeeper was rooted to the spot and could only watch as the ball flew against the net.

With Neymar and Kylian Mbappe galloping ahead with electric flair, skill and potency, it was a centre-back who got the opener. These two sides are so packed with talent, there are threats all over the park. It was a constant barrage from both sides, played like a brilliant game of chess, Mauricio Pochettino and Pep Guardiola in charge of the quality pieces. 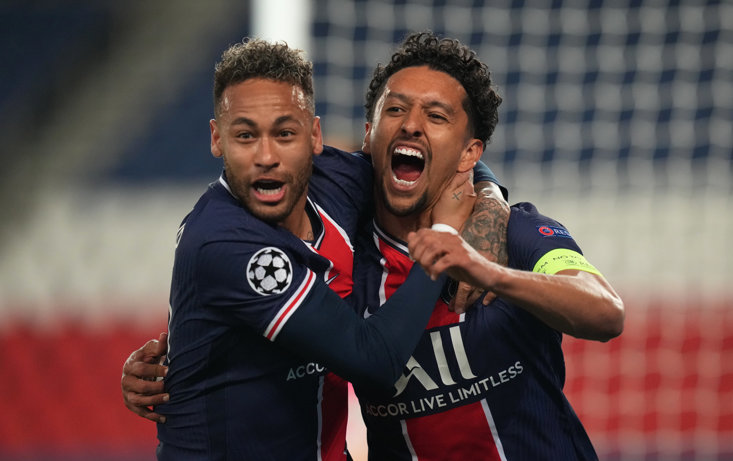 The hosts nearly doubled their advantage just before the half hour mark, again from a corner but Leandro Paredes couldn’t get his header on target. John Stones and Joao Cancelo were kept busy and both made important challenges as PSG controlled much of the opening 45 minutes.

Ten minutes into the second half, the home side nearly doubled their advantage but Marco Verratti, sliding in, was able to get the connection on Mbappe’s rolled cross into the area. Soon after Kevin De Bruyne tried the acrobatic but his effort went over the bar.

Just after the hour mark, Kyle Walker made a lung-busting run into the area after neat build-up play but his cross was cleared out for a corner by Marquinhos. Then the goal came. The ball was played out from right to left and was worked to Kevin De Bruyne who nonchalantly switched feet and put a speculative ball into the area with the inside of his boot. It curled and travelled towards goal, drifting so lightly all it needed was a touch or glance to change its direction. However, it evaded everyone, even Keylor Navas and, somehow, found its way into the back of the net. City had their strike away from home.

With twenty minutes to go, the Premier League leaders were awarded a free-kick in a prime position, central and a few yards outside the box. De Bruyne and Mahrez stood over the ball, PSG quaking. The duo chatted and Mahrez took a few steps back before KDB copied him. It was Mahrez who stepped up and hit a low drive with dip which sailed into the goal.

De Bruyne revealed what occurred in the moment and said after the game, "He [Mahrez] asked me if he could take it, I said if you believe in yourself you can take it. I have full confidence in all my team. He scored so who am I to say anything?"

From one down, to two up, City were flying and then, their evening got even better when PSG had to play the last fifteen minutes with only ten men. With the home tie getting away from the Ligue 1 side, former Aston Villa and Everton midfielder Idrissa Gana Gueye stretched for the ball but caught Ilkay Gundogan and had to go. It was late, from behind and it looked like a nasty one.

You wouldn’t think there was a second leg to come as both sides continued to probe and move forward with plenty of verve. City, though, held on for a famous win in the French capital and they are in the driving seat as they look to reach the Champions League final.