Kevin de Bruyne just knows how to score massive goals, in big games, and Chelsea must be sick of the sight of their former man. Manchester City’s main man delivered yet again when his side needed him to, scoring the only goal of the game as Pep Guarudiola recorded a 1-0 win over Thomas Tuchel’s Chelsea.

That result takes City 13 points clear of their London rivals in second place and means that they have now recorded three successive 1-0 victories over Chelsea in the Premier League, since losing the Champions League final by the same scoreline.

But this was De Bruyne’s day, as it so often is when he comes up against the club that let him go all those years ago. The vintage strike in the second half from the Beligan who has always had something to prove against Chelsea was enough to secure a three points that surely makes City’s lead at the top unassailable. Remarkably, this was his fifth strike against Chelsea since he joined Manchester City, which makes his former employers his most profitable opponent in terms of goals.

Oh how they must regret that decision now.

Despite the home win, Chelsea did push City at times, and if they were slightly more clinical, this match of few chances could have had a different outcome. Romelu Lukaku, back in from the start, left John Stones on the deck but when racing towards goal decided to try and play in Hakim Ziyech rather than go for goal. The pass was misplaced, but it was an early warning sign for Manchester City.

City kept pressing however and Cancelo’s low balls across the box were causing issues but Chelsea still looked dangerous and just couldn’t find the right pass in the final third. With Lukaku constantly making runs, the duo of Ziyech and Christian Pulisic failed to find him time and time again, and with Mason Mount and Kai Havertz sat watching on from the bench, you have to question Thomas Tuchel’s selection in those forward areas.

Phil Foden put a wonderful ball into the Chelsea box but given he was playing as the centre-forward, there were no other sky blue shirts in the box. City’s press finally paid off as City forced a mistake from Mateo Kovacic in the final third but Jack Grealish, when one-on-one with the goalkeeper, could not beat Kepa Arrizabalaga.

Football on BT Sport
@btsportfootball
A work of art 🎨🖌 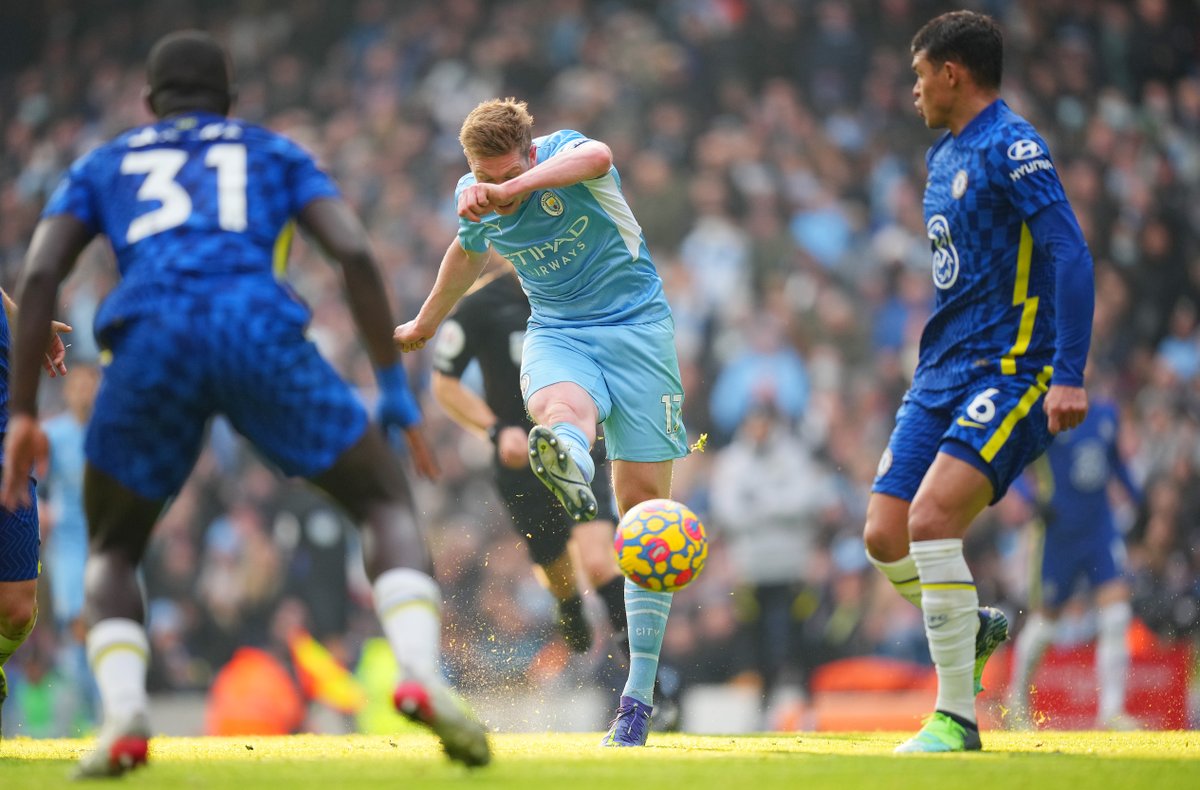 The sides went in level at the break, but Lukaku was finally played through by Kovacic only to be denied by Ederson. However, City were still on top and flourished as the game became more open. Raheem Sterling who was so bright throughout was tormenting Marcos Alonso and fired an effort just wide before De Bruyne scored another key goal against his former club with 20 minutes to go.

He picked up the ball midway inside Chelsea’s half and drove towards the box before picking his spot and bending the ball beyond Ederson. This was a vital goal from a player who has stepped up time and time again on these occasions and stuck the knife into a Chelsea side that would love a player of his ability in their midfield.

City have now surely done enough now to win their fourth Premier League in five seasons. This wasn’t a vintage performance, but once again, as they did against Arsenal, they picked up another three points. Give them the trophy now, the Premier League champions have beaten the European champions to retain their domestic crown.