Football
News
In the biggest moments of the season, it has been the young Englishman who has produced the goods...
Simon Lillicrap
12:00, 04 May 2021

As Manchester City prepare for their second leg of the Champions League semi-final against PSG, Pep Guardiola knows he can one again rely on his most ‘clutch’ player. Kevin De Bruyne is spectacular, Ruben Dias is without a doubt the signing of the season, but when it comes to big games and big moments, nobody in sky blue has been as influential in clutch situations as Phil Foden this season.

Forgive the Americanism, but to explain - a clutch player is a sportsperson who performs at the crucial moments in key matches. Hitting a three-pointer as the buzzer goes in the NBA, hitting a home run with the bases loaded, throwing that perfect touchdown pass in the Super Bowl. In football, that means performing when you are needed the most, in the biggest club tournament of them all, the Champions League.

In the quarter-final against Borussia Dortmund, with the score level at 1-1 in a tight first leg, it was the 20-year-old Englishman who tipped the tie in City’s favour. He controlled a short corner on the edge of the area before rifling the ball into the bottom corner to make Dortmund’s task in the second leg a whole lot harder. In that second leg, he scored once again, this time in the 90th minute in another 2-1 win to book City’s place in the last four.

In fact, of Foden’s 14 goals in all competitions for Man City this term, nine of them (64%) have come when his side are either trailing or drawing a match. Five of those nine have been match winning goals, more than any of his teammates. For context, Kevin De Bruyne has hit three match winners, while five other players including Gabriel Jesus have one.

For a side that doesn’t trail often, when they do, it seems this young English talent is the man to get them out of danger. This marks a sensational year of progression from the man who made just three starts in the Champions League last season. It also proves Pep Guardiola right. 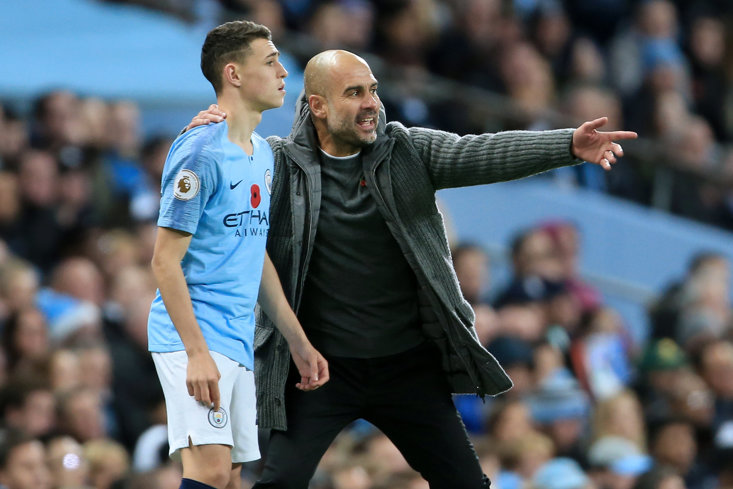 For the past four seasons it has been clear City had a world class youngster on their books, however with an absolutely stacked squad featuring the likes of David Silva and De Bruyne it seems unlikely that the teenager would get enough gametime to fulfil his potential. There were several calls for him to go out on loan and several enquiries from clubs like Parma that Guardiola personally blocked himself, such was his belief in nurturing Foden’s talent.

Instead of being forced abroad to learn his trade, he stayed at home and got to train with some of the finest footballers on the planet. Being around Sergio Aguero, De Bruyne and Silva every single day, while watching the leadership of Vincent Kompany take City to a record points total proved to be the perfect learning environment for the Englishman. More importantly, he was being managed by one of the finest coaches in the game.

Guardiola knew exactly what to do with Foden and despite facing criticism for his lack of game time in the past, has managed his career perfectly. Every minute detail has been tracked by Guardiola and his reward for that dedication is now one of the best attacking midfielders on the planet, at the age of just 20.

City have a wealth of talent at their disposal for the second leg against PSG. Millions upon millions of pounds have been spent on assembling this side yet the gem in midfield, didn’t cost them a single penny. Manchester City don’t need to score against PSG tonight, an unlikely 0-0 draw would be enough to take them to Istanbul, but if they do end up needing a goal, don’t be surprised to see their most clutch player hit the jackpot once again.