Manchester City have won the Carabao Cup for the fourth consecutive year after defeating Tottenham 1-0 in the final at Wembley. City dominated the game but it took a late header from Aymeric Laporte, who could count himself lucky to be on the pitch after two first half fouls, to win the final.

In front of 8,000 spectators who made a huge noise inside Wembley and made the game so much more enjoyable, City were on top from the first minute as they secured their eighth League Cup win, drawing them level with Liverpool in the history books. However for Spurs, who haven't won silverware since 2008, the wait goes on. Harry Kane, injured all week started for Spurs and played the entire 90 minutes, while Kevin De Bruyne started for City ahead of their Champions League semi-final on Wednesday.

City were well in control over the opening half an hour, as Raheem Sterling was denied by a brilliant block by Toby Alderweireld when free in the box, while countryman Phil Foden saw his close range effort hit the post after another sensational block from the Belgium defender.

Sterling, who was bright throughout as he attempted to impress his manager, chased after a lost cause to dink the ball over Lloris and just past the post from a tight angle while minutes later Riyad Mahrez stood up Sergio Reguilon and fired the ball just past Lloris’ far post. He tried the same thing again moments later with the same outcome as Guardiola’s side exerted their dominance over Ryan Mason’s men.

Mason, managing just his second game in senior football, saw his side improve after the break as Giovani Lo Celso saw his shot tipped past the post at the start of second half but that was as dangerous as Spurs looked as City came back at them. Gareth Bale and Moussa Sissoko were introduced off the bench with little impact as the Citizens kept creating chances.

Fernandinho’s header was easily stopped by the Spurs keeper before Ilkay Gundogan saw his shot go wide of the post. Mahrez then found a bit of space on the right after a quick counter-attack but Lloris once again got down low to stop his effort from the edge of the box. However, the French World Cup winner would lose his clean sheet from a set piece as Laporte got his head to a Kevin De Bruyne free-kick to break the deadlock. 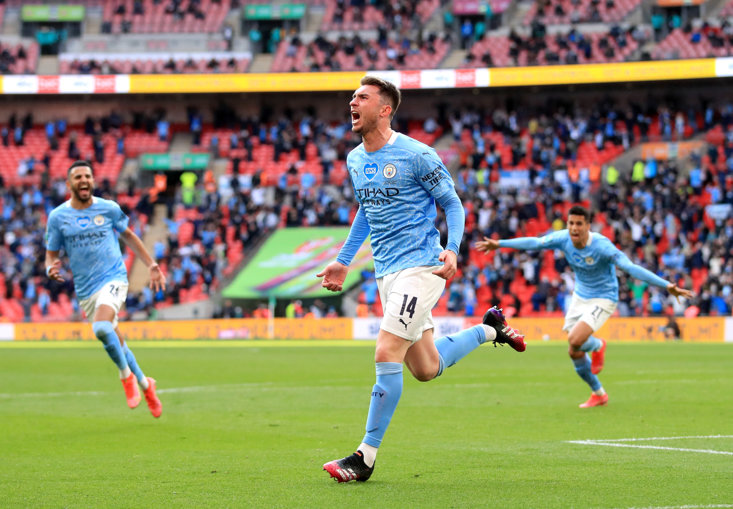 "It's very special for us after we lost in the FA Cup. [We needed] to get confidence and keep going. In the last two months we have been so good. We have to keep this rhythm, to win more titles,” he said after the game.

"It was difficult today, they were a good team. It's never easy. Today we have done very well.

"I was thinking about my yellow card. We know a little mistake can cost you. I was being careful.

For all of the money Manchester City have spent, for all the talent Pep Guardiola has at his disposal, they are still a joy to watch. In finals, the Spanish boss just knows how to get the job done, winning his 30th trophy in his career and City now have one in the bag this season. It may just be the starter with the Premier League and Champions League to come in 2021, but this is Manchester City’s competition.

Four in a row.