It doesn’t get much bigger than a Manchester derby but when City Women and United Women meet on Friday evening, there is plenty riding on it. The two sides have enjoyed impressive starts to the season and had been boosted by the fact leaders Chelsea saw their 33-game unbeaten run come to an end last weekend. But the Blues returned to winning ways immediately on Wednesday, defeating Arsenal 3-0 to immediately remind everyone they are the team to catch.

Free-scoring City have netted 43 goals already in 13 games, more than any other side, and have lost just once. United, who have played a game more, have suffered two defeats but are two points clear of their local rivals and now trail Emma Hayes’ Chelsea by three points.

When the Manchester rivals meet at City’s Academy Stadium on the Etihad Campus, they’ll know the winner will hold a huge advantage when it comes to battling for the title come May. The fact leaders Chelsea suffered a shock home defeat at the hands of Brighton despite having 30 shots to the visitors’ three is a massive boost to their hopes.

United, though, were licking their own wounds last Sunday after dropping three points at home to Reading, allowing City to close the gap by beating Arsenal 2-1 with goals from Ellen White and Lauren Hemp. 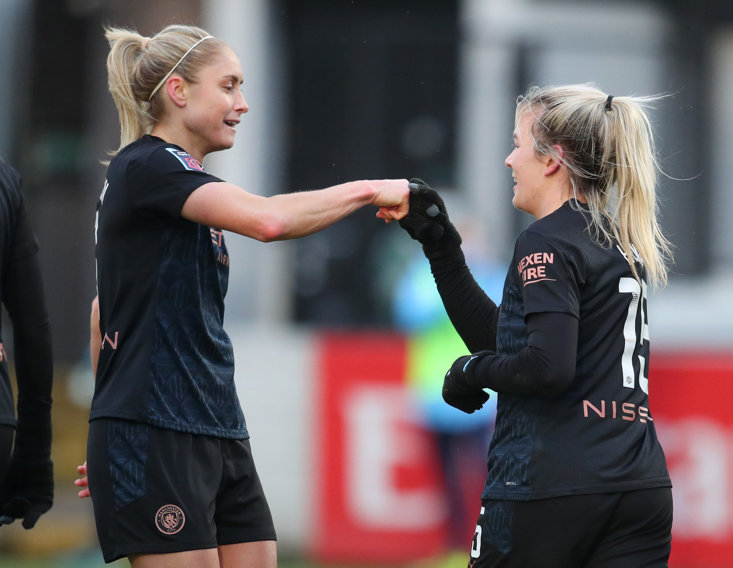 “Only having 12 teams in the league, it’s very difficult because you have to be consistent,” said City’s manager, Gareth Taylor, who made 53 appearances for City’s men between 2003 and 2006. “When I heard that result afterwards, with Chelsea, it was a real surprise, but it’s very hard.

“People will be looking at those two results and saying they are a shock, they are a surprise, but this is football. This is why we love it – it happens. Fortunately for us on Sunday, it didn’t happen to us.”

Casey Stoney’s side, on the other hand, came unstuck at the worst time, losing 2-0 at home to the Royals. A further setback would seriously harm their chances, and so this week’s Manchester derby is pretty much all or nothing. While a first-ever Champions League entry for finishing in the top three would be a huge step forward for a team playing only their third season since reformation, Stoney will not want to close the door on title hopes, even with the news that US international Tobin Heath could miss up to three months of action due to an ankle injury sustained in training in January.

This is one game where local bragging rights are paramount but when you’re up near the top and on the tails of the team in first, every goal and every point counts. It’s a game of small margins and there is no room for error.

Another slip up for the Red Devils, at a time when Chelsea have already returned to winning ways, would make a serious dent to their title holes. City are on a good track but a home loss at the hands of United would hamper their progress too. Friday’s clash is a play-off to push Chelsea all the way.