Ah, Manchester. The proud home of The Sportsman is known throughout the world for its music, sport and culture. And this week The Ashes have come to town, as Old Trafford hosts the fourth test between two of the oldest rivals in sport. But our home city’s also known for something else - rain. Lots of it.

In our defence, the reputation is worse than the reality. According to bp-tools, it is in fact only the 14th rainiest city in the UK, with Glasgow taking top spot. Take that John Barrowman.

However, that said, it doesn’t mean the wet stuff isn’t common around Cottonopolis, and showers are expected again over the weekend. You and I know rain doesn’t go well with cricket. Ever.

So what’s there to do around town when the cricket is rained off? Here’s five just for starters...

You’re here for the cricket, so obviously a sports fan, then there are some perfect indoor activities you can enjoy around town. The National Football Museum is packed full of famous shirts, balls, medals and more as well as famous National Museum Hall of Fame featuring the greatest names from our sport.

It really is a must-visit place for any football fan and it is incredibly accessible from Victoria train station. Once you have whittled away a couple of hours there you can wander along Deansgate to the Classic Football Shirts shop, one of only two in the country and a treasure trove for any football fan. This is a trip down memory lane with classic shirts from the Premier League and all around the world, with some absolute gems in store. You can lose track of time in the shop but it is well worth a visit if you are in town.

If you’re a music lover then you know what this city has to offer. From Oasis to The Smiths to The Stone Roses and Joy Division, some of the best music in the world has come from our patch and there are some gems to be seen around the city.

The best way to see them all in an afternoon is to go on the Manchester Music Story Tour, a two or four-hour journey that takes in some of the most legendary music venues in the city, including the site of Hacienda, The Ritz Ballroom and Salford Lads club, a shrine for fans of The Smiths.

Okay so we’ve slightly cheated with this one and you may need your umbrella, but Manchester also boasts the world’s longest-running soap opera.

Forget Neighbours and Home and Away, Coronation Street is the real deal. At one stage it was actually more popular in Australia than the UK. On this tour you get to walk the hallowed cobbled streets of this TV institution that first aired on ITV in 1960. Alongside Rita’s Corner Shop and Roy’s Rolls, you can pop into the famous Rovers Return, which has seen more rows and scandals than Betty made hot-pots. 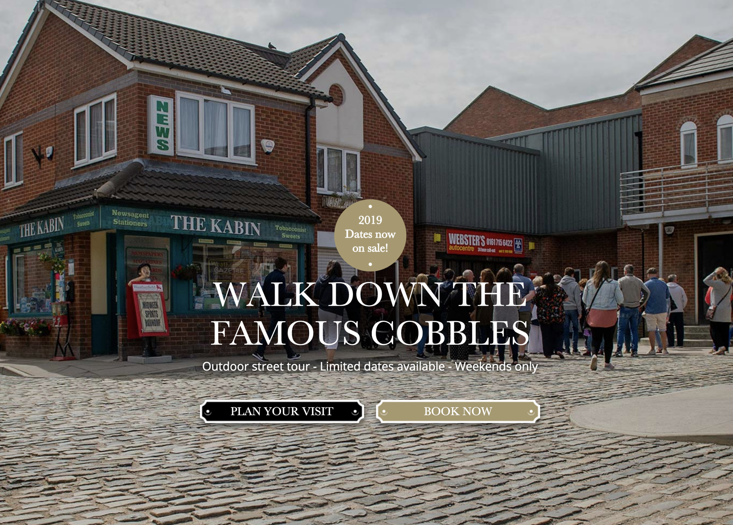 Tour Old Trafford And The Etihad

Our city boasts two of the most famous football teams in the world, one of which is actually brilliant at football. If you’re not lucky enough to take in a Manchester City or United game, then head down to the grounds and go on the stadium tour, where you’ll get to explore for yourself.

Old Trafford is phenomenal. The largest club ground in English football has bagfuls of history and the trophy room is a sight to behold. The Etihad may not boast the same collection of silverware (but they’re working on it) yet the tour of a remarkable stadium is still worth it as you’re allowed into the dressing room and can experience walking up the tunnel.

And this weekend, City’s Women host United in a hotly-anticipated derby at the Etihad with more than 20,000 spectators expected after the success of the Lionesses at the World Cup. It’s sure to be a fascinating game and you can still buy tickets here.

Give Up And Grab A Drink At The Brotherhood

Manchester boasts many fantastic pubs but located bang in the centre of the city, the Brotherhood of Pursuits & Pastimes is one of the best all-rounders. Spread out over three differing floors, there’s even a sun-drenched seating area outside for when the big ball in the sky pays a visit to these parts.

The ground floor, complete with sizeable screens, is always a blast while the upstairs ‘library’ provides a more intimate setting, however downstairs is where all the real action is. We’re talking darts, ping pong, foosball, and pool, plus booths with private screens for your viewing pleasure. The walls are decked out in sports posters, and while football is the focus, there’s late-night NFL, boxing, and even screenings of Game of Thrones.

It’s not just about the entertainment, the Brotherhood also offers a wide selection of craft ales, lagers and spirits for you to try to accompany a remarkable food menu. An all-round winner for all ages.

x
Suggested Searches:
Tyson Fury
Manchester United
Marcus Rashford
Lewis Hamilton
F1
Air Jordan
More
cricket
The New Book Shining A Light On The Biggest Scandal In Cricket...
It has been nine years since the News of the World ceased publication. Nine years. Doesn’t time [ ... ]
cricket
How Botham And England Revived The Spirits Of A Nation At The...
In the summer of 1981 a combination of spiralling unemployment and racial tension had led to riots in [ ... ]
cricket
Ben Stokes Inspires England Victory In Five-Day Test Classic
This was five-day test match cricket at its finest. Ben Stokes took the final three wickets on Tuesday [ ... ]
cricket
Batting Legend Tendulkar Warns ICC Five-Day Tests ''Should Not...
If you’re looking for a cricket batting record, odds on Sachin Tendulkar probably owns it. The [ ... ]
cricket
England Head To South Africa Test In Search Of Answers And A...
England end a historic 2019 by taking on South Africa in the First Test in Centurion this week. But [ ... ]
cricket
England World Cup Winner Moeen Ali's Conscious Uncoupling From...
“I just want to get that buzz back”. England’s Moeen Ali has continued to put [ ... ]
cricket
England Fail To Win A Test Series In A Calendar Year For First...
England have lost another Test series in 2019, which brings to a close a difficult 12 months that has [ ... ]
cricket
Joe Root Double Century Gives England A Glimmer Of Hope Against...
Joe Root hit a stunning double century to give England a slight hope of victory against New Zealand [ ... ]
cricket
Pope Steps Up After Baffling Selection Leaves England Short...
It is ever difficult to predict exactly what will unfold when England go on tour. Ollie Pope, a man [ ... ]
cricket
Book Review - Ben Stokes: On Fire
Like rugby, cricket fancies itself as a bit of a proving ground for leadership and performance techniques, [ ... ]
cricket
Ben Stokes Throws His Weight Behind ''England's Best'' Joe Root
Ben Stokes has leapt to the defence of under-fire England Test captain Joe Root following the heavy [ ... ]
cricket
The Time Has Come For Joe Root To Step Down As Captain And Focus...
Joe Root loves a soft dismissal these days.  Should England decide to move him aside as captain [ ... ]
cricket
Steve Smith's Welsh Fire To Face Oval Invincibles In First Game...
Steve Smith and Jonny Bairstow will clash with Jason Roy and Sam Curran in the world’s first-ever [ ... ]
cricket
England's 'New Era' Gets Off To Worst Possible Start Against...
England's 'new era' under Chris Silverwood got off to a humiliating start with a huge innings [ ... ]
cricket
Why England's T20 Triumph Over New Zealand Matters More Than...
There could not have been a more fitting antidote to the slightly subdued atmosphere surrounding England’s [ ... ]
cricket
Silverwood Over Kirsten Is The Right Choice For England's New...
England have confirmed the appointment of Chris Silverwood as their new head coach to Trevor Bayliss, [ ... ]
cricket
Why Ashes Win For Australia Could Be A Good Thing In Long Term...
It might well have been a headline from 2019. That famous obituary we all know so well, written [ ... ]
cricket
Five Things That Prove Steve Smith Ain't Perfect
Steve Smith. The best batsman in the world and seemingly impossible to get out from an English point [ ... ]
cricket
Ashes Hero Ben Stokes Must Be Considered Test Cricket's Best...
With every switch-hit, Ben Stokes eclipsed Botham of ’81. In the process, the third Ashes Test [ ... ]
cricket
England’s Lion Heart Jack Leach Is Granted Free Glasses For...
Specsavers have made good on Ben Stokes’ request to grant Jack Leach free glasses for life after [ ... ]
cricket
The Ashes: Why Staging A Test Is Vital To County Hosts
In the run-up to the Ashes, the talk has been about pitches. To be precise, it’s been about poor [ ... ]
cricket
England vs Australia: Evolution Of The Ashes Rivalry
The Ashes is one of the oldest and most compelling competitions in sport. Cricket’s famous test [ ... ]
cricket
Jofra Archer, Joe Denly, And Olly Stone Included In England...
Rarely does a 143-run victory give ECB selectors so much food for thought, but a serious scare against [ ... ]
cricket
A Historic Moment For Irish Cricket As First Ever Test Against...
Two years on from being awarded Test status, Ireland head to Lord’s for a historic first meeting [ ... ]
cricket
Eoin Morgan, Shahid Afridi And Martin Guptill Among The Star...
Friday’s draft confirmed the make-up of the six teams taking part in the inaugural Euro T20 slam.  [ ... ]
cricket
Now For The Ashes: England’s World Cup Winners On The Brink...
How do you top it? Will there ever be anything quite like the magical disbelief of England’s victory [ ... ]
cricket
Redemption Song: How Pantomime Villain Ben Stokes Became A National...
Anguish is an emotion that lights up Ben Stokes’ face in the big moments. Not one to shy away [ ... ]
cricket
Eoin Morgan’s Personal Journey Is The Great Story Of England’s...
It does not get any closer than that. For Eoin Morgan and his men, the tournament ended in the most [ ... ]
cricket
India Have Big Questions To Answer After Cricket World Cup Exit...
This was a semi-final lost in the first three overs of the second innings. A night can change a lot [ ... ]
cricket
Trevor Bayliss Backs England To Deliver When It Matters
Since Trevor Bayliss took over as England head coach in 2015, a global tournament [ ... ]