The English Premier League ranks as the most-watched league in European football.

Regardless of certain teams’ success and prestige in Europe, it’s clear, England’s going to be holding the bragging rights for this one for a while, and further accentuated by the fact that the second-tier Championship can claim to be the third highest attended.

The Premier League routinely bags almost 15million more attendees than the nearest contender, the German Bundesliga, and supported with some of the most iconic venues and now more innovative, state-of-the-art stadia in world football.

Eight of the 20 teams competing in the EPL for the 2018/19 possess a stadium that was built in the post-Millennium; The Cardiff City Stadium, Manchester City’s Etihad, The AMEX Stadium, King Power Stadium, the London Stadium, St. Mary’s Stadium, the new Tottenham Hotspur Stadium, and Arsenal’s Emirates.

Arsenal had the second highest capacity in the Premier League, before being surpassed - with a mere 2000 seats - by north London rivals Spurs and their freshly opened stadium in N17 that was finally inaugurated in April 2019.

Details provided by SoccerStats show that Arsenal at least have been able to fill their stadium closest to their capacity out of any other side in the Premier League this season, with the average attendance to the Emirates reaching on average 59,895, just 150 shy of full capacity and a league high of 99.2%.

This may be testament to manager Unai Emery and his relative success in his inaugural season with the Gunners since taking over from Arsene Wenger.

Preceding the ‘New White Hart Lane’, Spurs had been operating out of Wembley for the majority of the past two seasons with an allocation provided from the national stadium at a much reduced capacity, less than 60% and obviously far less than any home base for a Premier League side.

London neighbours West Ham have a consistently strong support, one of only three sides to have clocked over 1million visitors in total to their campaign before the final game of the season.

Aside from Spurs’ externally-affected percentage, Bournemouth at Dean Court just creep above 90% from their 11,464 seat capacity on the south-coast, but can boast better than Burnley at Turf Moor, who have 90.9%.

Manchester United with The Theatre of Dreams of course remain unchallenged for the number of supporters flocking to their stadium on a home gameweek. The biggest club stadium in the country, Old Trafford has registered only a 156 difference in their highest and lowest attendance this season, and this despite a dire campaign under Jose Mourinho and Ole Gunnar Solskjaer.

Credit where it’s due, they may have faced a dire end to their second season in the top tier, but Brighton & Hove Albion routinely pack the rafters at the AMEX Stadium, and are only bested by Arsenal where it comes to reaching their full capacity. Top-four battling Spurs have even clocked a lower attendance at points within the season.

The Seagulls have had 98.9% capacity in the 18/19 season, most likely a result of the long-standing agonising wait they had previously had to suffer for a ground to definitively call their own. After moving from the Goldstone in 1997, Brighton had to endure playing at both Withdean and Priestfield across a period of almost 15 years. 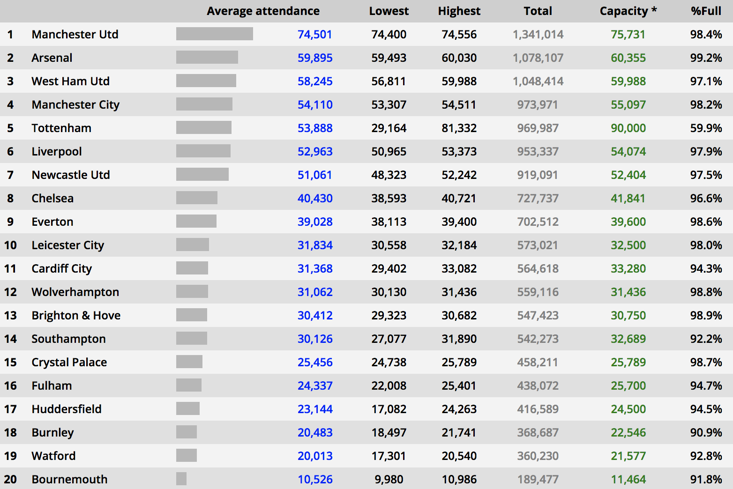