Manchester United came from behind to surely book their place in the Europa League final with a thumping 6-2 win over Roma, which was reminiscent of their 7-1 win on the same ground in 2007. Edinson Cavani, Bruno Fernandes and Paul Pogba tore the visitors to shreds in the second half as Roma’s defence disintegrated when 2-1 up.

That trio provide the perfect blend of creativity and ruthless finishing and will surely be key if Ole Gunnar Solskjaer's side are to lift the trophy in Gdansk. United started strongly and went in front as the trio combined for the first time on the night. Fernandes put a deft finishing touch to a sumptuous move featuring Pogba and Cavani however, their positive start was quickly forgotten as Roma grew into the game.

Pogba was the centre of attention at the other end after Roma were awarded a soft penalty as the Frenchman was adjudged to have handled in his own box. Lorenzo Pellegrini duly converted and Roma kept creating chances, eventually going in front thanks to Edin Dzeko.

The former Man City man, who scored at Old Trafford in that famous 6-1 derby win, finished from close range as former United man Henrikh Mkhitaryan slid a perfect ball through to Pellegrini who squared for Dzeko to finish.

United had looked second best in the opening 45 but bounced back early in the second half as that dangerous trio of Fernandes, Cavani and Pogba combined again on the break. The Portuguese eventually found Cavani who swept the ball into the top corner with aplomb. For the first leg of a semi-final, both sides were in no mood to defend.

United and Cavani were clearly in a goalscoring mood and went ahead in the tie when Roma’s substitute goalkeeper spilled a weak Aaron Wan-Bissaka shot into the path of the Uruguayan who bagged his second of the night. The referee then gave his second penalty of the night and this one was as soft as they come.

Cavani missed his backheel and then stumbled over Chris Smalling’s leg while almost off the pitch, yet the penalty was awarded and Fernandes converted. Then Paul Pogba put the title out of reach with a thumping header from a Fernandes cross as Roma completely crumbled. The icing on the cake came late on when Cavani played a wonderful ball with the outside of his boot into the path of Mason Greenwood, who put the tie beyond all doubt with United’s sixth of the night. 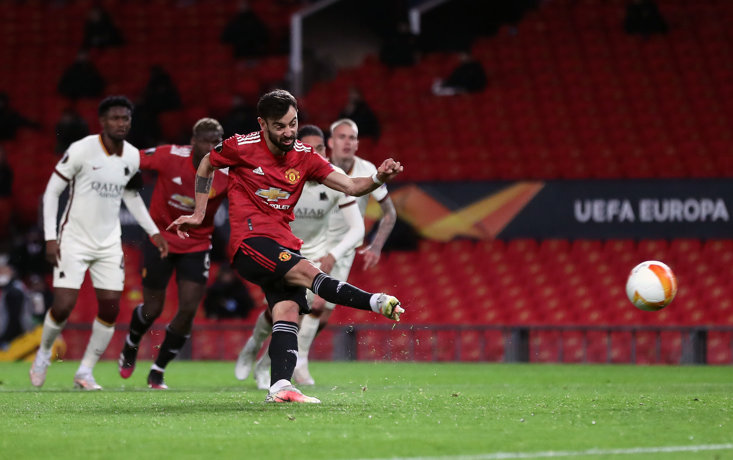 Solskjaer's reds have roared back once again when behind and put on an incredible semi-final display to put one (and a half) foot into the final. Their opponents are still up in the air after an equally thrilling semi-final between Arsenal and Villarreal.

The Gunners fought back bravely in Spain after a shocking first half put them at the mercy of Unai Emery’s Villarreal. Goals from Manu Trigueros and Raul Albiol put the hosts 2-0 up and when Dani Ceballos was dismissed in the second half it looked as if Villarreal could put the tie to bed. However, when everything looked like it was going against them, Arsenal found some fight.

Nicolas Pepe converted a penalty after Bukayo Saka was fouled and then Etienne Capoue was dismissed for Emery’s team after a late challenge on Saka. It was ten v ten for the final ten minutes but it seemed after 80 minutes of chaos, both sides were happy with this result.

Arsenal looked down and out with ten men and 2-0 down, but were able to dig deep to keep this tie alive heading back to north London. Villarreal will have a big say in the second leg as Emery returns to the Emirates, but Manchester United await in the final.