Manchester United battled and toiled, tried and struggled but they finally got their winning goal. With seven minutes left to play, Mason Greenwood dived and eventually, via a few bodies, the ball hit the back of the net to give the Red Devils a 2-1 win over Brighton on Sunday night.

When they won title after title under Sir Alex Ferguson, it was these late victories which made them champions. Now, as they sit second under Ole Gunnar Solskjaer, they are earning vital points when not at their best. It’s not ideal and it’s rather fortuitous but if United can keep winning this way, they will be equipped to challenge.

Manchester City are too good and too far away right now but grinding out results will be essential as they continue to improve. 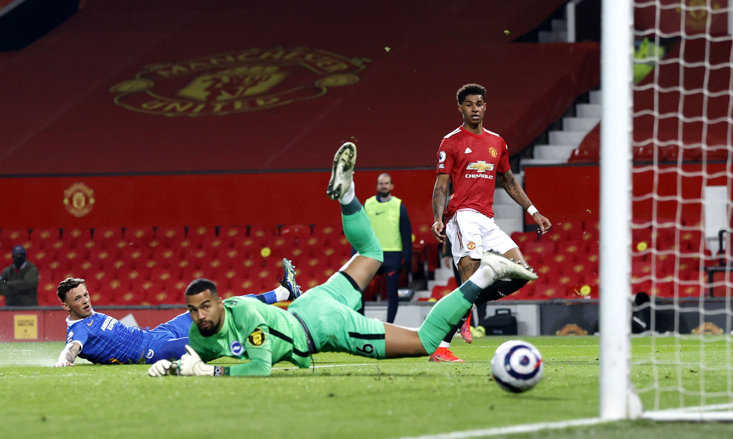 Here, at Old Trafford on Sunday, the Manchester club failed to remember Danny Welbeck’s clinical edge in the area and the former United striker gave relegation battlers Brighton the lead after only 12 minutes. Dean Henderson, preferred in goal to David De Gea, saved the first header but was powerless to stop the rebound. After third-placed Leicester lost to Pep Guardiola’s City on Saturday, this was a good chance for United to steal a march on second but early on they were failing.

They had plenty of the ball and had chances but this wasn’t a good display for the first hour. However, they finally got back into the game on the hour mark. Bruno Fernandes raced clear and played a ball through to Marcus Rashford who slotted the ball past Seagulls goalkeeper Robert Sanchez. They had their equaliser and were now ready to hunt for a winner, no matter if they were playing below-par or not, they had to search like the United of old and think like them too.

They looked dangerous after their goal and Greenwood and Fernandes both went close, the latter having two efforts from distance stopped by Sanchez. Then, the breakthrough came. Was there an element of luck to it? A little, but that is what is needed sometimes.

Luke Shaw found Fernandes with the outside of his boot and the Portuguese crossed for Pogba. The Frenchman skewed a volley but it bounced towards Greenwood who jumped at it and directed it goalwards.

“This kid's a striker,” he said. “That movement there is striker's instinct. I was pleased today that it wasn't about the goal, it was about his all-round game. For someone so young to be doing that (his all-round play) despite not being in a rich vein of form, that shows a lot about the kids attitude.

“He hasn't had the luck in front of goal this season. I'm sure Ole (Gunnar Solskjaer) and his staff will look at the fact he's making unbelievable runs but he's not getting picked-out at the moment but that will come.

“People will be telling them this kid's making the runs. You've got to pick him out if you want to get results.'

It wasn’t pretty but United’s quality shone through in the end. Just like it used to. They have a long way to go, but winning these sorts of nitty games will stand Solskjaer’s men in good stead heading into the business end of the season.