Football
News
Manchester United Predicted Lineup To Face Wolves: Is This Who Should Be Dropped By Ole Gunnar Solskjaer?
Jack Porter
09:44, 02 Apr 2019

A tepid performance at home to Watford still resulted in three vital points at the weekend for Manchester United and full-time manager Ole Gunnar Solskjaer’s pursuit of Champions League qualification for next season.

It was a case of winning ugly against a better Hornets side who must have been severely disappointed to come away from Old Trafford with nothing to show for their efforts.

Manchester United now venture down to the Black County for their midweek fixture against an impressive Wolverhampton Wanderers outfit who produced a brilliant win over the Red Devils in the FA Cup a little over a fortnight ago.

Manchester United are looking to avoid consecutive away defeats against Wolves in all competitions for the first time since August 1980, following that loss last month, as well as attempting to make up for a drab - nay, demoralisingly dire - 1-1 against Nuno Espirito Santo’s side in Manchester last September, helping Wolves to claim more points against ‘Big Six’ sides in the Premier League this season than any of the other 14 teams in the competition, with ten.

The last time Man Utd failed to win home or away against a promoted side in a single Premier League campaign was back in 2002/03, when they drew at home and lost away to Manchester City. Furthermore, Wolves are unbeaten in four Premier League games at Molineux, keeping a clean sheet in two of the last three.

Both sides however could be forgiven for being preoccupied with arguably more imperative fixtures. Wolves have their first FA Cup Semi-Final in 21 years to contend with, when they visit Watford this weekend, whilst United play the first of their two-legged Champions League tie against Barcelona in a week’s time.

This may have some understandable impact on team selection. In his pre-match press conference, Solskjaer provided an update on his available choices to take to the pitch at Molineux on Tuesday night;

Victor [Lindelof] has had a good few days of training now so he’ll be ready. Apart from that. [Matteo] Darmian and [Eric] Bailly are still out. [Antonio] Valencia is still out and [Alexis] Sanchez is still out (via the MEN).

At the weekend, Solskjaer operated with a two-pronged attack of Anthony Martial and Marcus Rashford, with Juan Mata playing just behind. Martial - who scored the winner at the weekend - was taken off against Watford with just under a quarter-of-an-hour to go, and though the Frenchman has travelled down to the Midlands, Romelu Lukau should take his place in the XI.

The area most in need of a bit of swazz is undoubtedly the midfield.

Fred, who scored United’s only goal last time out against Wolves, could reclaim his place instead of Ander Herrera; the Spaniard disappointing against Watford and plagued by recent rumours of a summer transfer to Paris Saint-Germain. Academy product Scott McTominay, who shone in a dire period of notable absences that had been blighted by injury has been dropped from the last two league games, the defender also only getting a four-minute cameo at Wolves last time out.

Lindelof - one of the most impressive players for United this season in both tenures of Solskjaer and Jose Mourinho - though fit, might be precautionarily held back from an immediate return, with both Chris Smalling and Phil Jones performing admirably at the weekend.

The one player many will be clamouring for is 20-year-old Diogo Dalot to replace 33-year-old Ashley Young at right back. The Portuguese full-back will be hoping to start tonight and perhaps play behind Jesse Lingard higher up the flank. 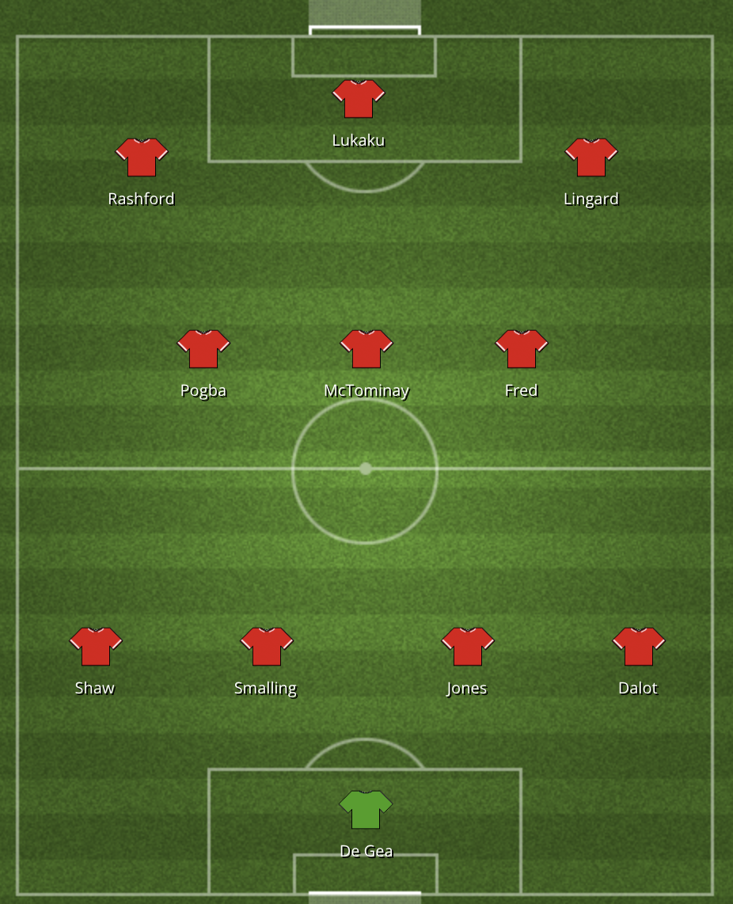