Mansfield Town secured a hard-fought 2-1 win over Northampton Town at Field Mill, in a game of two halves. The Stags caught Northampton cold in the first 45, but felt the full force of their power in the second half as they staged an impressive fight back.

When the Cobblers had the final automatic promotion place stolen from their grasp, despite winning 3-1 on the final day, the play-offs were always going to test their mettle. The unlikely nature of Bristol Rovers’ 7-0 win was gut-wrenching for Jon Brady’s side and saw them miss out on a spot in League One on goals scored, as the two sides were matched on points and goal difference.

Australian manager Brady had turned his troops into one of the most difficult sides to beat in the fourth tier, with the fiercest defence that had only conceded a meagre 38 goals in 46 regular season games. But this organised Northampton side we have grown to know this term fell apart at Field Mill in a feisty first half.

Early on Jordan Bowery threaded the ball into top scorer Rhys Oates, who fired the ball past Northampton’s Jonny Maxted to give the hosts the lead with their first shot on target. If this tie needed a spark to ignite the battle - then this was it.

Later in the first period, Jordan Bowery powered home his 9th goal of the season from a tight angle after wide man Jamie Murphy completed a fine passing move with a low drive across the six-yard-box. Many feared Northampton would suffer a hangover given what happened to them on the final day, but they were simply being overrun by a Mansfield side full of energy.

The Stags managed to get a grip on the game and dominate the midfield as Matty Longstaff kept them ticking, while Oates up front was a constant threat, firing wide when he could have added a third.

Bowery has twice been promoted to League One with Chesterfield and Oxford and that experience clearly told, as he consistently troubled the Northampton back-line. Oates once again fired a powerful effort goalwards that was parried by Maxted, while Bowery’s touch in the box, bringing the ball down from the sky, was a sign of his class.

Northampton Town
@ntfc
All to play for on home turf 👊 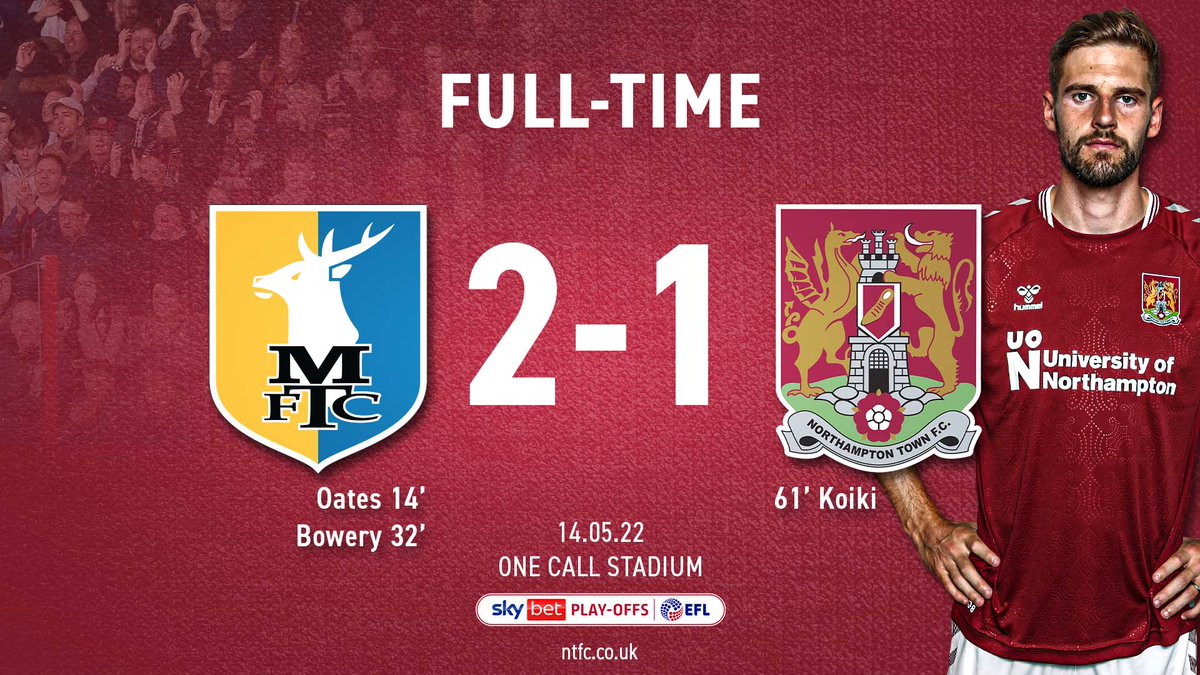 Nigel Clough’s side secured their place in these play-offs with a 2-2 draw against champions Forest Green Rovers and their good form continued here with a front-footed display. Northampton did improve in the second period, and got an important goal back just after Matty Longstaff was replaced by the hosts.

Louis George Appéré did well on the edge of the area to tee up Ali Koiki , who saw his low effort deflected into the net past a helpless Nathan Bishop. He may be an unlikely goalscorer, but his first of the season couldn’t have come at a more critical time for his side.

The away side could have got an equaliser as Fraser Horsfall’s header bounced wide before some last ditch defending kept Mansfield in-front. Sam Hoskins’ corner should have been headed in by an unmarked Joe Mills at the back post but he just got his effort wrong. Although they didn’t make Mansfield pay tonight, clearly Northampton could use their strength from dead balls to hurt the Stags at Sixfields.

They couldn’t quite find an equaliser on the night, as Mansfield held on for a 2-1 win, but given their second half showing, Brady’s side will feel confident of staging a second leg turnaround. It took 45 minutes for Northampton to shake off their final day hangover, and they’ll be hoping it doesn’t leave long-lasting damage.