Twelve months ago today, West Ham United looked dead and buried. Trailing 3-0 with eight minutes remaining against Tottenham Hotspur at White Hart Lane, David Moyes’ side looked destined to defeat. But we all know what happened next, with Manuel Lanzini’s injury-time stunner capping a remarkable comeback.

The Premier League has become known for its incredible turnarounds over the years, and here are just a few of the greatest comebacks in the competition over the last three decades.

We’re starting with this one since it’s the anniversary. The game started almost as incredibly as it would end, with Son Heung-min giving Spurs the lead in the opening 45 seconds. Harry Kane soon lashed home a second, and by the 16-minute mark it was 3-0, with Kane heading home from a Sergio Reguilon cross.

Then came the about-turn. Fabien Balbuena headed in a first on 82 minutes and Davinson Sanchez turned the ball into his own net to make things interesting, then after Gareth Bale failed to bury a chance at the other end Lanzini stepped up to send a piledriver into the top corner from 25 yards to complete a sensational comeback.

This one came out of nowhere. Theo Walcott and Johan Djourou both scored within the first three minutes for Arsenal, and when Robin van Persie bagged two more to give the Gunners a 4-0 lead inside 26 minutes it appeared that Arsene Wenger’s side were set to rack up a cricket score.

Even after Abou Diaby was sent off for grappling with Joey Barton, a comeback seemed the last thing on the cards, but the Magpies set about making a dent in the Arsenal lead. Barton netted two penalties either side of a Leon Best strike, then the late Cheick Tiote unleashed a stunning left-foot strike with three minutes left on the clock to somehow rescue a point for Newcastle and leave St James’ Park rocking.

“We were down 3-0 to Tottenham, at Tottenham, and I never said a word in the dressing room. I sat on the radiator and it was bloody burning hot, too. And I says: ‘Next goal’s the winner,’ that’s what I said.

Sir Alex Ferguson was right. His side trailed heavily at the interval having conceded goals to Dean Richards, Les Ferdinand and Christian Ziege, yet the moment Andy Cole netted a 46th-minute goal all the moment was in Manchester United’s favour.

Laurent Blanc pulled another back, then Ruud van Nistelrooy and Juan Sebastian Veron both netted in a four-minute spell to give United the lead. David Beckham then put the icing on the cake three minutes from the end to the astonishment of all present.

Football Daily
@footballdaily
🗣"It is a funny game."
Sir Alex Ferguson with a great story about a half-time team talk at Manchester United
105
665

Never has there been a comeback of greater consequence. City needed a win to clinch a first league title in 44 years, while QPR potentially needed the three points to stay in the Premier League.

The drama began with a Pablo Zabaleta strike which escaped the grasp of Paddy Kenny, but Rangers struck back through Cisse. Joey Barton saw red for elbowing Carlos Tevez, then booted Sergio Aguero on his way off, but it didn’t stop his side from taking a shock lead when Jamie Mackie headed home to leave City fans dreading a last-gasp failure.

But then it happened. Edin Dzeko equalised in injury time and then came the most famous goal in Premier League history as Aguero won the title with an incredible 94th-minute winner. 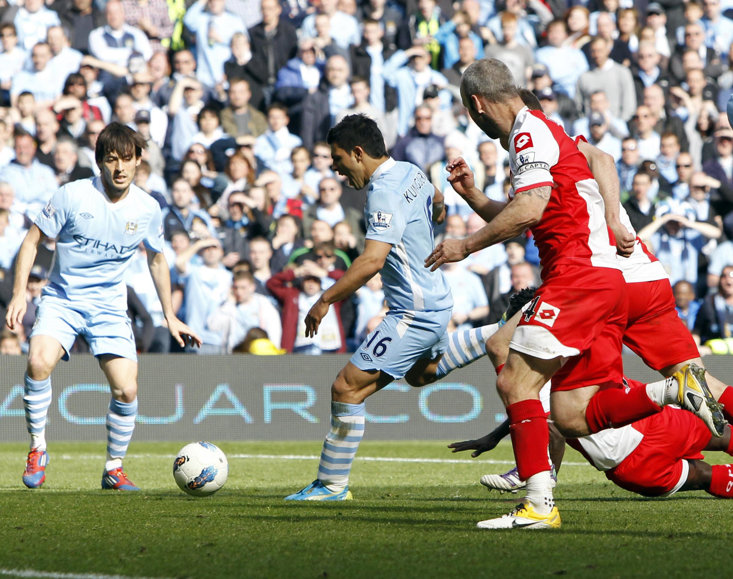 It’s known as ‘Crystanbul’, an ironic twist on Liverpool’s 2005 Champions League final success in Istanbul. The Reds took a first-half lead through Joe Allen and Daniel Sturridge doubled their advantage shortly after the break. When Luis Suarez made it 3-0 with 35 minutes remaining the only question appeared to be around how much of their nine-goal deficit to Manchester City the visitors would eat into as the title race reached its climax.

But Palace launched a remarkable riposte in the last 11 minutes. Damien Delaney rifled home a left-foot shot to narrow the deficit, then Dwight Gayle turned home from close range. And when Gayle scored again on 88 minutes, Liverpool’s title hopes were in tatters, prompting dismay for Steven Gerrard, tears from Luis Suarez and a further six-year wait for a Liverpool Premier League title.

A contemporary one to finish us off, with Wolves’ heroics this weekend joining the annals of great Premier League turnarounds. Danny Ings and John McGinn scored second-half goals for Villa which had looked set to earn Dean Smith’s side a comfortable enough triumph.

But Romain Saiss slid home for the visitors with 10 minutes left, then Conor Coady bundled home an equaliser before a deflected Ruben Neves free-kick in the fifth minute of injury time capped a stunning victory in the West Midlands derby.