Claudio Ranieri became the 33rd manager working in England’s top-four leagues to lose his job so far this season after top-flight strugglers Fulham wielded the axe for the second time in just over three months.

As alarming as this number is, the overhaul accumulation of managerial departures is actually one less than at this stage last year, and four exits short of the 2016/17 tally.

The Sportsman runs through the month-by-month departures that have occurred from August through to the end of February; comparing the current campaign with each of the past two seasons.

History tells us that the opening month of August is traditionally a quiet and quaint month in the Sack Race, as reflected in the past two seasons. The 2016/17 campaign didn’t witness a single departure, while Justin Edinburgh (Northampton) was the only exit last season, and that was on the final day of the month.

After an unusually chaotic August, September cooled down somewhat, although that didn’t prevent Bradford and Northampton from ditching Michael Collins and Dean Austin respectively - the former have since made yet another change (February).

The sacking season tends to explode into action in October with this particular month home to a total of 18 managerial exits over the last three seasons. 2018/19 and 2017/18 both contained four apiece, with the top-flight duo of Ronald Koeman (Everton) and Craig Shakespeare (Leicester) paying the price for poor stars in 2017.

October 2016 wasn’t a good time to be a manager employed in England’s top-four tiers. The manic month was absolute carnage as an eye-popping 10 gaffers were brutally discarded - with five contracts termination within a manic five day period - including the former Champions League winning manager, Roberto Di Matteo, who lasted only 123 days at Aston Villa.

November 2016 wasn’t quite as hectic, but six bosses were still catapulted out of their hot seats, the last of which was Kenny Jackett who ditched Championship out Rotherham after 39 days - Paul Warne then became the club’s third manager of the season.

A couple of Premier League gaffers had their contracts torn to shreds at this particular stage of the 2017/18 season, as West Ham lost faith in Slaven Bilic and West Brom gave Tony Pulis the boot. Barnet, from League Two, also sent Rossi Eames packing.

Slavisa Jokanovic (Fulham) was one of five managers to lo be sent to the guillotine in November 2018. The Serbian became the first Premier League boss to be discarded, while Harry Kewell became the second Notts County boss to be dispensed in less than three months, with his sorry spell totalling just 74 days.

Clubs were particularly ruthless in the most recent festive period which featured seven managerial casualties. Man Utd (finally) wielded the metaphorical axe upon the head of Jose Mourinho seven days before Christmas Day. The Portuguese coach was surprisingly replaced by Ole Gunnar Solskjaer with the interim boss yet to suffer a single domestic defeat (at the time of writing). Meanwhile, Mark Hughes (Southampton) was the month’s other Premier League victim.

Five managers left in both of the 2017/18 and 2016/17 seasons. One of which was Carlos Carvalhal, who was sacked by Sheffield Wednesday on Christmas Eve, only to turn up at Premier League Swansea four days later. Another was Bob Bradley who was axed by the same club a year earlier on 27th December following a disastrous 11 game stint at the helm. 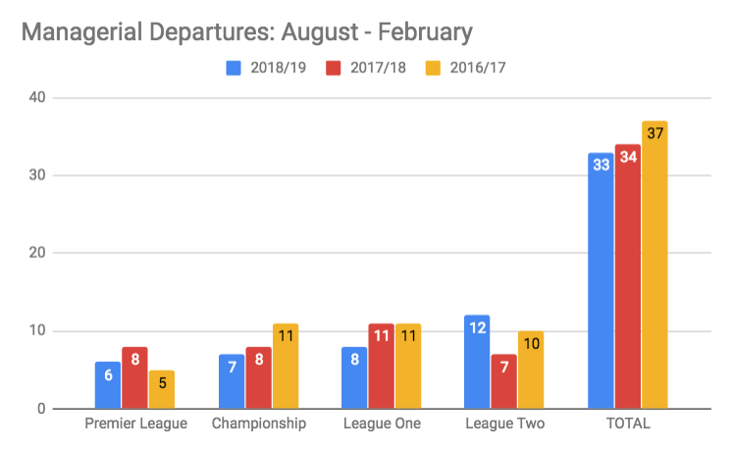 Manager departures from the last 3 seasons, from the period August to February

The opening month of the year has been brutal to bosses in the past three seasons. Seven have fallen by the wayside in each of the past two campaigns, including Marco Silva who was sacked by Watford last year, a decision that was blamed on Everton who tried to poach the Portuguese coach earlier in the season.

A gargantuan TEN managers were left jobless at this stage of the 2016/17 season, including Hull’s Mike Phelan whose position had only been made permanent in October.

February 2019 looked to be passing by without incident only for three clubs to push the panic button in the final week. Two came in the Premier League as Leicester City grew tired of Claude Puel, and Fulham pulled the trigger for the second time in less than four months, turning their back on Claudio Ranieri after only 17 games in all competitions.

February is not Ranieri’s month, as (then) defending champions Leicester axed the Italian back in 2017, nine months after he led the club to the title. Owen Coyle (Blackburn) and Chris Brass (Bury) also packed their bags in this period.

Eight managers were sent to the scrapheap in February 2018, among them Paul Heckingbottom who controversially switch Barnsley for Yorkshire rivals Leeds. It didn’t work out and he made way for a certain Marcelo Bielsa in the summer, and is now north of the border at Hibernian.