It was early this week when Spanish newspaper AS reported that Manchester United are looking to bring Borussia Dortmund defender Marc Bartra to Old Trafford.

The 26-year-old has only been in Germany for one year after completing a £7 million switch from Barcelona last summer. In his first season, Bartra ended up making 23 appearances in all competitions under former Dortmund boss Thomas Tuchel.

But the defender was forced to undergo surgery in April after being injured in the bomb explosion that hit the team coach before their Champions League clash with Monaco. Now that he’s made a full recovery, Bartra will be raring to go for the new season. 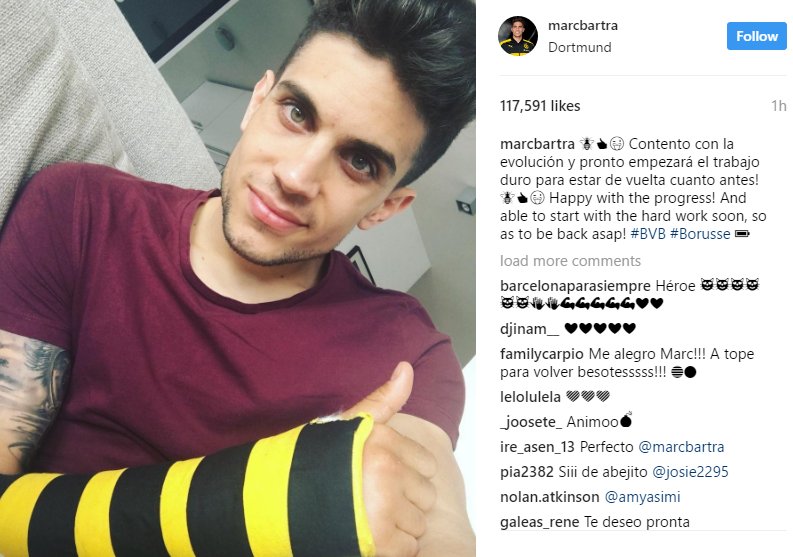 Jose Mourinho has made just one signing this season to bring Víctor Lindelof to Old Trafford. The former Benfica centre-back is a Sweden international and had been on the club’s books for at least over six months. Should United sell Chris Smalling, who The Sportsman understands is available for transfer, Mourinho will need another defender to add depth to his side.

It remains to be seen whether Bartra will consider leaving Dortmund after one season, but clubs such as Manchester United don’t come knocking very often, and if there’s truth in this story you’d think the former Barcelona starlet would jump at the opportunity.

United had considered resigning Michael Keane from Burnley, who has since moved to Everton for a reported £30 million, but the player wanted assurances that we would be a regular starter. Now, looking at Bartra, the club may have found a superior addition to bolster their options in defence.

Renowned for his strong passing game, Bartra also offers something both defensively and offensively in the air. His anticipation skills and willingness to tackle also mark him out, and he’s stronger than he appears. 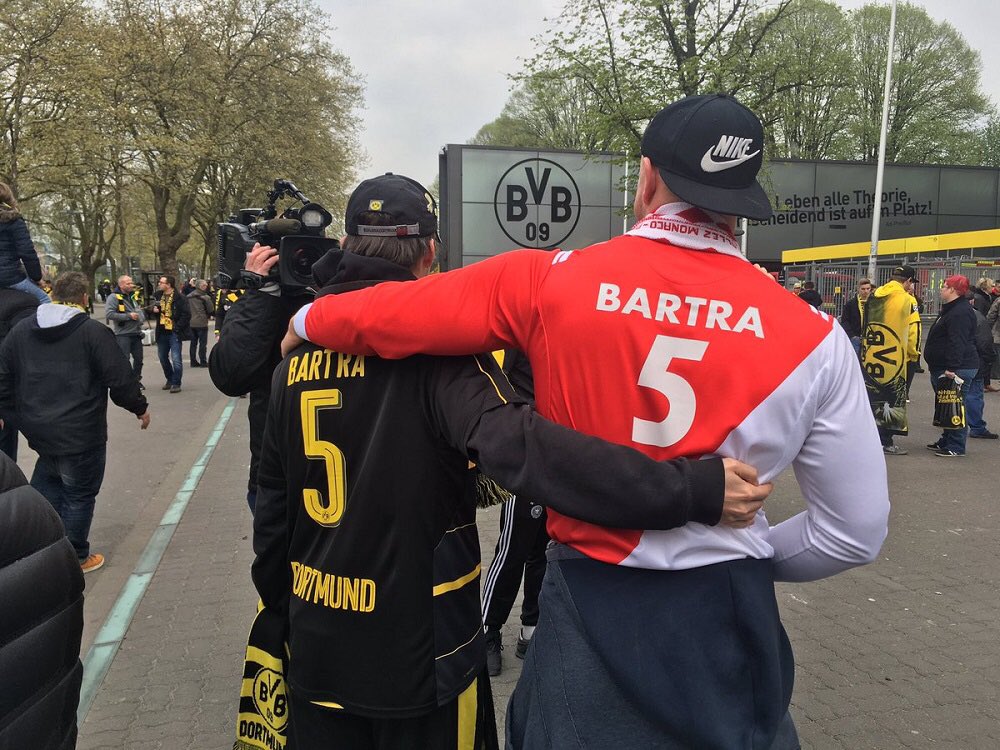 Beginning his football education in 2001 at Espanyol, Bartra moved to Barcelona’s famed academy La Masia one year later aged 11. There he would graduate to Barcelona B, making 81 appearances, before being granted a debut for the senior side in a 2-1 defeat to Atletico Madrid in 2010. It wasn’t until the 2013-14 season that Bartra would establish himself as a regular in the starting line-up.

Bartra made 20 La Liga appearances that year – starting 17 of them – which included four Champions League outings. Thereon, perhaps after gifting Gareth Bale a winning goal in the Copa Del Rey final, Bartra played a diminished role over the next two years, starting just 11 games in 2014-15 and four in 2015-16. But, during that spell, he would win five La Liga titles, two Champions League winners’ medals and three Copas Del Rey.

A Spanish international with 12 senior caps, Bartra has come to the age when he needs to nail down a position somewhere. He will wait and see if Dortmund’s new manager Peter Bosz, formerly of Ajax, fancies him or not before considering another switch across Europe.

Last season, Bartra made 18 Bundesliga appearances. He also started seven times in the Champions League. It was the start of a rebuilding process of a faltering career, therefore, a move to another country has its risks.

There was speculation regarding Barcelona having a buy-back clause in Bartra’s contract, but Stefan Buczko, who covers Borussia Dortmund for ESPN told The Sportsman otherwise:

Ever since Bayern Munich snapped up Mario Gotze by triggering his buy-out clause in 2013, it has been Borussia Dortmund’s hardline policy to not allow any buy-out clauses or buy-back clauses in player’s contracts as they sign them, but demand commitment.

At 26, Bartra still has time to mature as a defender, but he comes with experience and a winning background.

“After a slow start Bartra has developed into a cornerstone player for Dortmund,” Buczko continued. “He became an integral part of the team due to his qualities in build-up play on which they will want to rely upon the coming season. Although the La Masia product joined from Barcelona, he quickly identified with the black and yellows and was well integrated within the team.

“I don’t see much reason for Dortmund to sell him nor for Bartra to want away at this moment, but I can see why clubs [like United] are showing interest in him.”

Watch this space. Mourinho wants another defender this summer.

More
football
Enjoy It While You Can - Messi Exit Will Mark The End Of A Clasico...
It has been the centre of the European sporting calendar for the last couple of decades. El Clasico, [ ... ]
football
A Tale Of Two Windows: Chelsea Could Leave Man United In The...
New goalkeeper, check. Commanding, experienced centre-back, check. Attacking quality, check. Chelsea [ ... ]
football
Dion Dublin’s Gaffer Tapes, The Podcast Taking You Inside The...
A good podcast will be a good friend. Whether you’re on a winter run, doing the weekly shop, or [ ... ]
football
Why Raheem Sterling Is Right To Call Out Social Media Over Racist...
“I don't know how many times I need to say this, but football and the social media platforms [ ... ]
football
The Book That Shows Why St Pauli Is A Football Club Like No...
Bayern Munich have won the Bundesliga for the past eight seasons. Borussia Dortmund have been champions [ ... ]
football
Everton Seek First Derby Win In A Decade With A Blueprint Belonging...
They say imitation might be the highest form of flattery, though there is absolutely no love lost between [ ... ]
football
Gary Neville Is The Catalyst For Change The Game Needs Right...
A week is a long time in politics, but a week in the politics of football? Well, that’s another [ ... ]
football
It's Time For Man Utd To Drop Harry Maguire... For His Own Good
Harry Maguire trudged off the Wembley turf looking like he had the weight of the world on his shoulders. [ ... ]
football
Get Off Gareth's Back - Southgate Is England's Best Manager...
Only three managers have ever taken England to World Cup semi-finals. Alf Ramsey won the whole shebang [ ... ]
football
Childhood Dreamer To Fantasy Football, Wenger’s New Book Is...
It really is true. You really don’t know what you’ve lost until it’s gone. He was [ ... ]
football
The Game Needs Premier League 2.0 And Rick Parry Is The Man...
The only thing that's certain is that it’s complicated. You’ll have seen the news that [ ... ]
football
The Nations League Injects Life Into The Tired International...
You might not know your Group A4 from your Group D2, and yes, it might on the face of it be the most [ ... ]
football
England's Under-21s Are Falling Short And Eddie Howe Is The...
If you’re anything like us, you will have been sat pulling your hair out at home on Wednesday [ ... ]
football
Why Red-Hot Calvert-Lewin Should Replace Harry Kane As England's...
When James Rodriguez hit a rocket for Colombia against Uruguay at the 2014 World Cup to become a global [ ... ]
football
Men In Blazers, The Podcast That Proves Americans Are Falling...
A firm fixture of the Stateside calendar now,  ‘Soccer’ has been certified as the fifth [ ... ]
football
Solskjaer Was A Stop-Gap, Pochettino To Man Utd Is Five Years...
Jose Mourinho had just been sacked for a second time by Chelsea, while Manchester United were a complete [ ... ]
football
More Than Just A Name, Five Things You Need To Know About Arsenal’s...
Yes, yes, we’ve seen all the posts and the hashtags, so he’s got a great surname. But there’s [ ... ]
football
High-Scoring, But Low Intensity - Is Covid Football A Bit Too...
We had Tottenham beating Manchester United 6-1, Liverpool losing 7-2 at Aston Villa. To some it was [ ... ]
football
The Numbers That Prove The Women’s Super League Is The Best...
“We can say hand on heart we are the best league because we really are. All the best players want [ ... ]
football
Podcast Review - The Glenn Hoddle Footy Show
A quarter of a century since he last kicked a football professionally, and 14 years after his last coaching [ ... ]
football
Book Review - How To Run A Football Club: The Story Of Our National...
With an extended lockdown threatening the existence of a substantial portion of the United Kingdom’s [ ... ]
football
Thiago, Kalvin Phillips And The Premier League ‘Quarterbacks’...
Thanks for reaching out. You do the math. My bad. Americanisms, you gotta love ‘em. We’ve [ ... ]
football
Wayne Barton's Book On David Beckham Highlights Golden Balls'...
When historians look back at the sports scene at the turn of the millennium, there will most certainly [ ... ]
football
Rosé For Rodriguez, A Bollocking For Bilic, Five Stories You...
Managers can’t manage masks, fans are finding new ways to hail their heroes, and Jurgen Klopp [ ... ]
football
The Covid Defying Smart Helmet That Could Help Unite Football...
After the longest season in history, a mercifully short reprieve for players to catch their breath has [ ... ]
football
Get An Edge On Your Rivals This Season With The Fantasy Premier...
What are you this year? ‘Lallanas in Pyjamas’? ‘Murder on Zidane's Floor’? [ ... ]
football
Neymar's Handbags, Shy Guy Jose, And Other Football Stories...
Just like that, we’re back in the room. There’s new rules (on and off the pitch), and renewed [ ... ]
football
Celebrating The Return Of The Premier League With Its Best Ever...
After the shortest pre-season on record, even if it has felt to some of us like the longest ever, Premier [ ... ]
football
Lionel Messi Teams Up With Budweiser To Inspire Tomorrow's Footballing...
Lionel Messi, for all you do, this Bud’s for you. We’ve got to admit, it’s got a certain [ ... ]
football
From 007 to 46 Million Followers, Ten Facts You Never Knew About...
Everton finally announced the signing of James Rodriguez on Monday evening, after the Colombian superstar [ ... ]