Manchester United Women boss Marc Skinner was handed a difficult task this summer, when he took over in the wake of Casey Stoney’s resignation. He was not just taking over from an excellent coach, but a pioneer.

The Arsenal legend had been with United since the belated inception of their professional women’s side, and had led them out of the FA Women’s Championship and into the Women’s Super League in scintillating fashion, finishing ten points clear at the top of the second tier. Stoney left at the end of last season, citing the poor facilities made available to her side at Carrington as a motivating factor. Stoney had overseen back-to-back fourth-placed finishes, and her side had been one point off a Champions League spot in her final campaign.

New hire Marc Skinner had to follow a manager who had enjoyed magnificent success in the role, and contend with the very conditions and unrest that led to her departure. Skinner had been an instrumental part of the evolution of the Birmingham City Women’s side. He had worked for the Blues as technical director, reserve team coach, goalkeeping coach and youth coach before being handed the top job. He performed admirably in charge, taking the team to an FA Cup final and implementing an exciting, attacking philosophy.

After leaving St Andrew’s, he coached in the United States at Orlando Pride. He holds the record for overseeing the longest unbeaten streak in the club’s history, and came to United riding a wave of momentum. His side have largely started their WSL campaign well. A 6-1 hammering to champions Chelsea in September was a chastening experience, but it’s the sole league game they have lost this season. Draws with struggling Everton and a Manchester City team who have been beaten four times already this season should have perhaps been turned into wins, but largely Skinner is doing well. 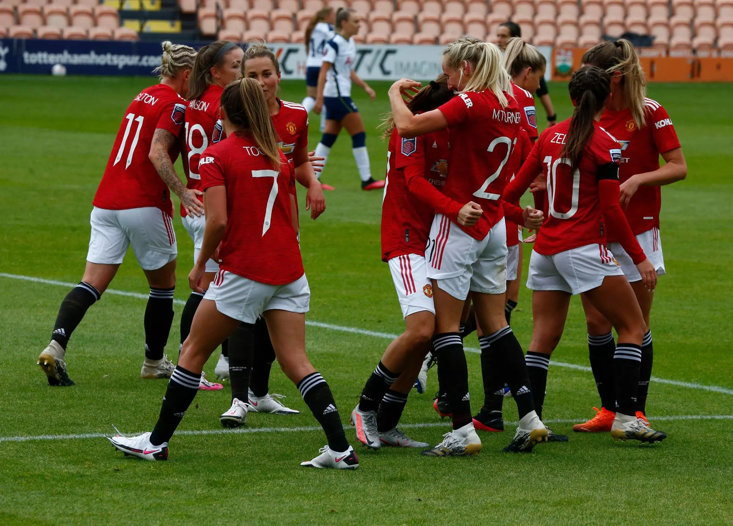 Rivals City are enjoying a horror campaign, after being widely expected to push Chelsea close for the WSL title this season. There is the opportunity there for United to implement a power shift. Their 2-1 win over the Cityzens at Leigh Sports Village in the  League Cup this week was a great start, snapping a five-game winless streak in Manchester derbies. The Chelsea battering demonstrated that Skinner’s side are some way off challenging for the title, but with an expected top-two side miles off the pace, there is an opportunity.

Chelsea and Arsenal are fighting a two-horse race for the title, but the three teams below them are separated by just three points. United, along with Tottenham Hotspur and Brighton & Hove Albion, are all in the battle for the third Champions League slot. A hot run of form could see United gatecrash the top three, and secure their first ever place in Europe.

They face a tough task in establishing such a run against Arsenal on Saturday. The Gunners are flying, and go into this round of fixtures top of the table. Jonas Eidevall’s side are yet to lose a game, and have scored 24 times while conceding just three goals in the process. It is a mammoth ask to get something from this game. But then following Casey Stoney was a similarly huge undertaking, as was going above the previously imperious City in the table. While United are undoubtedly the underdogs going into this game, they have a habit of exceeding expectations.