The Magic Weekend is almost upon us, and in the middle game on Saturday, loyal fans of the sport will be treated to the famous Wigan-Saints derby that holds the claim of being the original sporting derby.

We haven’t seen the pair meet at a Magic Weekend since 2012, where Wigan’s first half brilliance was overshadowed by a pre-scrum punch-up in the second half, resulting in three red cards for Warriors’ Chris Tuson, Gareth Hock and Saints’ Shaun Magennis. 42-16 was the scoreline at the City of Manchester Stadium, but since moving to Newcastle, the famous derby hasn’t been played there until this year.

“I can't wait and I know the lads can't wait as well. It was a concept that our fans really buy into and they make a good weekend of it.”

Powell was part of the 2012 Wigan squad that lifted the League Leaders’ Shield but lost out to Leeds in the play-off semi-final. He made his debut in August of that season so didn’t get the chance to face Saints in their last Magic Weekend fixture.

“The game is a massive game in itself and the fans are always going to turn up and be loud for this one. But I think to then add it to a Magic Weekend and put it at St James' where it's really special, it just adds a bit of spice to it.”

The traditions around Magic Weekend are important to most players as well as fans, and Powell believes the community coming together for a weekend is what makes it special.

“I think it's the rugby league family mixing together. I don't think you get that in many of the sports over here. Seeing different fans and different clubs all being in one stadium and maybe watching one or two more games that they wouldn't normally watch creates a great atmosphere, especially when you're playing.”

St Helens centre Mark Percival believes the same, citing the stadium as an exciting place to be on a weekend like this one.

“Yeah, it's unbelievable. We played here last year and it was a great atmosphere and a great stadium. Just looking around now, I forgot how good it was. I'm excited to be back here.” 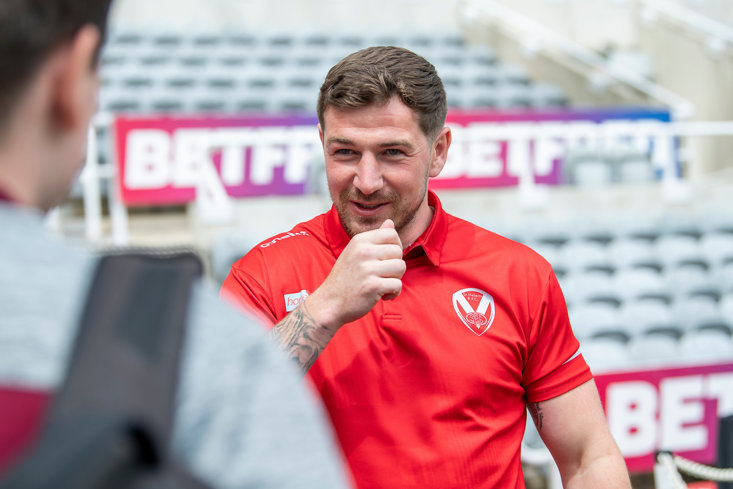 “I just think it adds an extra, I can't really think of the word! Everyone’s a bit more up for the game, and it’s as if all the fans are going to be here watching and all different fans, all gelling together, I think that's what makes it a little bit more special.”

‘Percy’ didn’t make his first first-team appearance until 2013, so he also missed the last time the two teams met at a Magic Weekend.

“I've not really played Wigan at Magic Weekend, so I think it's going to add to the atmosphere. Hopefully we get more fans from Wigan and Saints coming in and it'll be a huge game and they don't get much bigger than a Wigan-Saints Derby.”

Saints last game out saw them narrowly edged out 20-18 by Catalans in Perpignan, but Percival’s been dealing with a leg injury that’s caused him to sit out the last few weeks but should be back in the squad for Saturday’s clash against Wigan with the team focussing on bouncing back.

Speaking about last week, Percival added: “it's a disappointing defeat. I think the boys put in a massive effort and we just come up short and it's something that we're not going to let our confidence go, we want to bounce back again.

“There's no bigger game to do that than against Wigan on the weekend.”

Sam Powell is conscious of the reigning champions wanting to get back on track too: “I’m expecting them to bounce back and, you know, well, not bounce back. I think they played a good game over there, to be honest.”

“That was two good teams over there going at it. So probably pretty much similar to how they performed over there. They're a great team and I know they definitely won't want to get back to back losses. So we definitely want to try and put our best foot forward to get a win.”

When asked about if being ahead of Saints is the goal for this season, Powell believes that the Warriors are taking it at their own pace this year: “I know getting in the top two at the end of the year is a big advantage, but I think it's more of just building performance for us.

“As a team, as a club we've done a lot of good things this year and we've got a lot more hard work to go really. We’re putting the team first and the result will take care of itself.”

The Warriors have made excellent progress under new coach Matt Peet this year, already winning silverware in the young coach’s first season in charge of the senior team, which has been an enjoyable experience for Powell as he now fills a role as a senior member of the team.

“I've really enjoyed it from the start, the beginning pre-season, all the lads putting the team first, working hard on culture and and then mixing with the community, getting back in the groove after after a tough last couple of years we've COVID, that's been really good to reconnect with our fans and our community and the amateur game again and stuff really, really enjoyed it.”

Speaking of Wigan, Mark Percival has also been impressed with what he’s seen of the Warriors this season: “Yeah, I think they're brilliant. I think what Matt Peet's done, he's brought back a little bit of steel in Wigan and what I felt, I felt like what they were missing.

“And I think now they bring that week in, week out and and you can see that with the performances, they've all got a great team, they look like they're enjoying it together and I think that's the main thing and Peet seems to be doing a great job.”

Alongside the proceedings in Newcastle, Super League’s broadcast partners Sky Sports have encouraged fans and players to take part in the Sky Zero scheme. ‘Percy’ described the movement as ‘massively important’ and encouraged fans to take the train instead of driving to the games this year, with his opponent Powell saying, “I drink coffee most days so I think I'm going to start using a reusable cup rather than a fresh cup every day”

Magic Weekend gets underway with Wakefield Trinity vs Toulouse Olympique from 2:30pm on Saturday, followed by Wigan Warriors vs St Helens and Leeds Rhinos vs Castleford Tigers.

Make your predictions for this weekend via the Super League Predictor above for the chance to win a signed Super League shirt!