Snooker
News
The 37-year-old beat Shaun Murphy 18-15 in the Betfred World Championship final at the Crucible in Sheffield
Hector Nunns
22:21, 03 May 2021

Mark Selby brought the Crucible full house down on Monday night as he claimed a fourth world title to join snooker’s legends.

The 37-year-old from Leicester beat Shaun Murphy 18-15 in the Betfred World Championship final in Sheffield to pocket the £500,000 first prize.

And the showpiece was greeted, from the very first frame to when Selby lifted the famous silver trophy, by a raucous capacity crowd roaring their approval at every opportunity.

It was a huge personal triumph for Selby, even booed by a few fans as he entered the arena last night following a slow-play ‘gamesmanship’ row in his semi-final win over Stuart Bingham.

He silenced those critics as he moved up to No2 in the world rankings - but in the bigger picture this also felt like a key moment for sport and society.

Not since the controversially staged Cheltenham Gold Cup in March 2020 had there been a full crowd at a UK sporting event of any sort, but snooker’s blue-riband tournament was selected as one of the government’s more wide-ranging test pilot events.

The scientific data and evidence gathered will be used to help try and ease audiences safely back not only to indoor sport but also theatre, shows, comedy and music concerts. Therefore, Selby may not be the only big winner from the annual 17-day marathon of the mind and body, with other sports and arts stakeholders taking a keen interest. 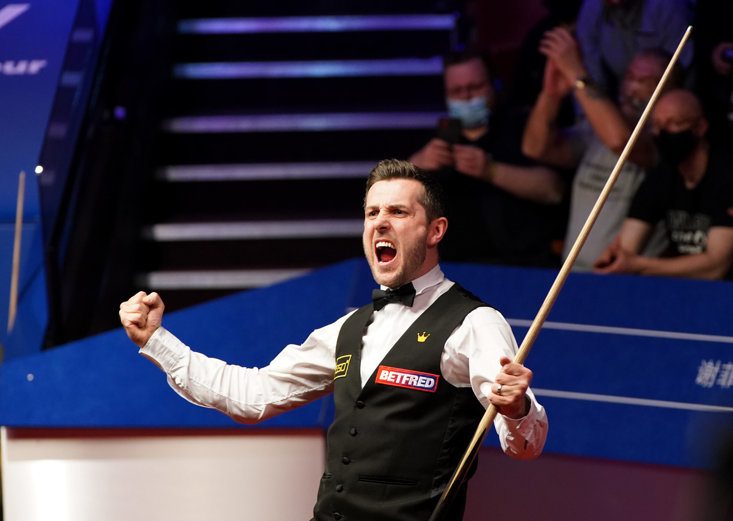 Selby said, “It feels unbelievable to join that club of players to have won four or more world titles at the Crucible.

“You try your hardest, and it is such a tough tournament to win. Winning it four times is beyond my wildest dreams, it was great to beat Ronnie O’Sullivan for the first one.

“It was hard to keep believing at times, there were some dark days a few years ago. But my coach Chris Henry, who also coaches Shaun, has worked wonders for me. Another aim for me now is to get back to world No1.”

Murphy said, "Mark is just super granite, I have known him since he was about nine and he was always that way.

“I think he broke me in the session on Sunday night and in the end that proved the difference.

“But I would like to say a very deep thank you to every fan here tonight, sport is nothing without you and you have all brought me back from a tough year on tour.

“Chris Henry was coaching us both here in this final – he is sacked in the morning!”

The Leicester Jester becomes only the fifth player to win four world crowns at the Crucible. He moves level with John Higgins, and now behind only Ronnie O’Sullivan, Ray Reardon and Steve Davis on six, and record-holder Stephen Hendry on seven.

Murphy came into the final having made clear he believed that winning the title, banking the cheque and lifting the trophy on their own were not enough. He stresses that it fell to the two finalists to put on a special show that no one in the crowd would ever forget.

Selby had insisted his own priorities were somewhat different, and that entertainment rankled far below improving his CV and adding to his tally of titles.His comments echoed those of the late Eddie Charlton, the leading Australian player who when asked if his sedate style would please the crowd replied. “*** the crowd!”

The long format of the World Championship final allows for ebb and flow – and it got that in this contest. Murphy’s strong first session, taking the game to Selby and managing to avoid the snooker strangulation techniques often employed by his opponent, saw him lead 5-3. But on Sunday night the Leicester Jester gave Murphy little to smile about, exerting huge pressure and tying him up in knots. That resulted in an emphatic 7-2 session win, turning the match on its head and earning Selby a 10-7 lead overnight to take into yesterday’s climax.

Though Murphy launched an attack in the afternoon session, Selby just about held him at bay to maintain that three-frame advantage going into the evening at 14-11. That ultimately proved simply too much of a lead and Selby homed in on victory, with a break of 120 putting him on the brink at 17-13.

Murphy refused to go away, and made it three century breaks in a row in the match with back to back tons of his own and runs of 100 and 103, but Selby took his own overall haul of ranking titles to 20, along with his three Masters crowns at the prestigious invitation event at Alexandra Palace, to push himself higher in the pantheon of greats.

Earlier, the sell-out crowd for yesterday’s final day queued in the drizzle in Tudor Square as they meandered their way slowly down through the various checkpoints to gain entry to the Crucible.

But after a season behind closed doors and the hurdles overcome to do Covid tests in their hometown 24 hours before getting to Sheffield, finding accommodation with hotels off limits to the general public and committing to post-event PCR tests to check for transmission, a bit of rain was not going to put them off.

There was social distancing in the foyers but not in the arena – managed every step of the way. Scientists and behavioural experts have been regulars at the theatre these last 17 days.

Lord Lloyd Webber recently had lunch with outgoing World Snooker chairman Barry Hearn, anxious to hear how the pioneering tournament might pave the way to getting his shows back on West End stages and wishing his outgoing counterpart the best of luck.

And the famous Crucible roar, a prolonged explosion of noise and a standing ovation as Selby and Murphy walked out onto their stage twice yesterday, offered a reminder of what has been missing in snooker, sport, and the wider world.