Mark Williams left John Higgins punch-drunk at the Crucible on Saturday night – with the Scot saying it was like being in the ring with Floyd Mayweather.

The three-time champion reached the Betfred World Championship quarter-finals with an emphatic 13-7 win over ‘Class of 1992’ rival Higgins in Sheffield.

And four-time winner Higgins, 45,  insisted he had been left black and blue after at one point losing nine frames on the spin and hardly managing to land a glove on the Welshman in a heavyweight clash of snooker titans.

After beating Higgins for the fourth time in five Crucible meetings Williams, 46, said, “I played really well throughout the match. I did take on a few kamikaze long pots but luckily most of them went in.

“I was 3-1 down and then won nine frames in a row and made some very good breaks, and was going for my shots.

“I was just enjoying it basically. Even though I was a long way ahead I was expecting a comeback from John, he got a few frames but it never arrived.

“When I was young I only dreamt of being a professional snooker player and thought I would probably be going down a mine like my father.

“It’s just I happened to be quite decent at snooker, I put the hard work in and made a good living for myself.

“To have come through with John and Ronnie and still be having matches like this in the quarter-finals of the World Championship is unbelievable.

“When I was a junior those two were winning most of the events, and we’re all still going.

“I honestly think those two are so far in front of me, and were right from juniors. It doesn’t embarrass me saying that.

“And I feel very glad to have won the tournaments I have playing in the same era, because it was a really tough one. But I don’t put myself in their class, even if I am the last one standing.”

Scot Higgins said, “It was like being in the ring with Floyd Mayweather – I got my head jabbed near clean off. Mark is just such a clever player. 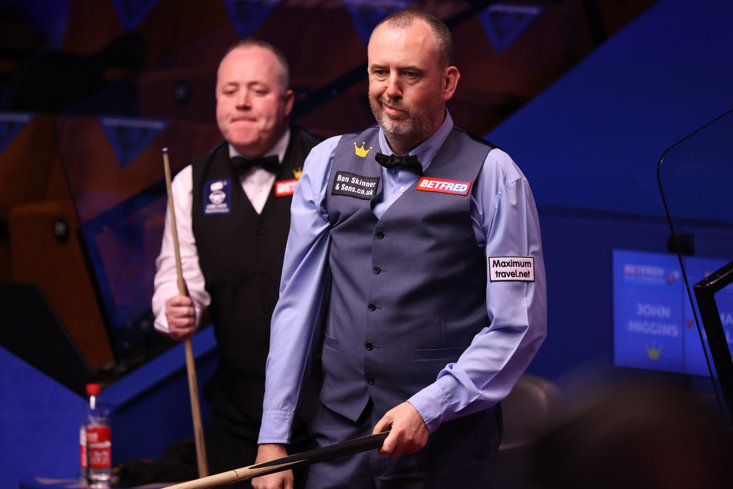 “He was in the middle of the ring, and I never got a look-in. But that’s what he does, and what he has been doing for so long. He was superb tonight.

“I will never accept that Mark is in any way behind me. Of the three of us that turned professional in 1992 and have done well, I put Ronnie O’Sullivan out in front and stands alone as the best.

“But Mark has given me so many beatings and especially at the Crucible. When you are up close and personal with players, you realise how good they are. He is an unbelievable player.

“I was annoyed not getting the 147. I was in two minds about how to play a shot near the end, I didn’t play it hard enough playing on the black.

“Probably it was the pressure of the fans, and that’s not something we have said much for a while!”

Williams will now play the winner of the match between three-time champion Mark Selby, who agonisingly lost out in the semi-finals last year to O’Sullivan, and Northern Ireland’s Mark Allen.

Meanwhile Shaun Murphy got off to a flier in his last-16 match against Masters champion Yan Bingtao.

The Magician laid down the gauntlet with an opening-frame century, and with a barrage of breaks soon made it 3-0 helped by a monster total clearance of 144.

Yan did manage breaks of 88 and 101, but with Murphy claiming some of the tight frames he stands 6-2 ahead after the first session.