A new era is on the horizon at Elland Road. After three-and-a-half unforgettable years under the stewardship of Marcelo Bielsa, a new way of thinking is called upon at Leeds United. Following the Argentine’s departure over the weekend, the club acted swiftly to bring in his successor, with everything pointing toward American Jesse Marsch.

The 48-year-old coach had been touted as Leeds’ next long-term appointment long before Bielsa’s position came under threat, which just highlights how long he has been on the radar of Andrea Radrizzani, Angus Kinnear and sporting director Victor Orta. He will be a figure in football who is largely unfamiliar to Leeds supporters as well as neutral fans based in the UK, but he does come with some interesting experience that should excite the Yorkshire club in particular.

The 48-year-old’s career as a player did not venture outside of the United States and it was also the place where he kick-started his next chapter as a coach. His first role was an honourable one, as assistant coach to former Swansea City boss Bob Bradley with the US national team in 2010. He remained in that role until Bradley was relieved of his duties in July 2011.

Marsch swiftly moved into life as a manager, taking over at Montreal Impact ahead of their debut season as an MLS franchise. In the club’s debut season, Marsch guided them to a 12th-placed finish with 42 points. It was clear that he was made for management and although he oversaw a successful first season for the club, he left in November 2012. The board were very happy with his work but the departure came as a result of differences in coaching philosophies.

His premature exit from Montreal in the adolescent stages of his career led to just over a two-year wait for his next role in MLS, but it was a big one. In January 2015, he was named the new head coach of New York Red Bulls, replacing Mike Petke. He quickly showed that a two-year hiatus from work hadn’t affected his ability to manage as he had an instant impact on The Red Bulls. Marsch guided them to the MLS Supporters’ Shield and a club record 18 victories and a points total of 60 which subsequently earned him the honour of being named MLS Coach of the Year. 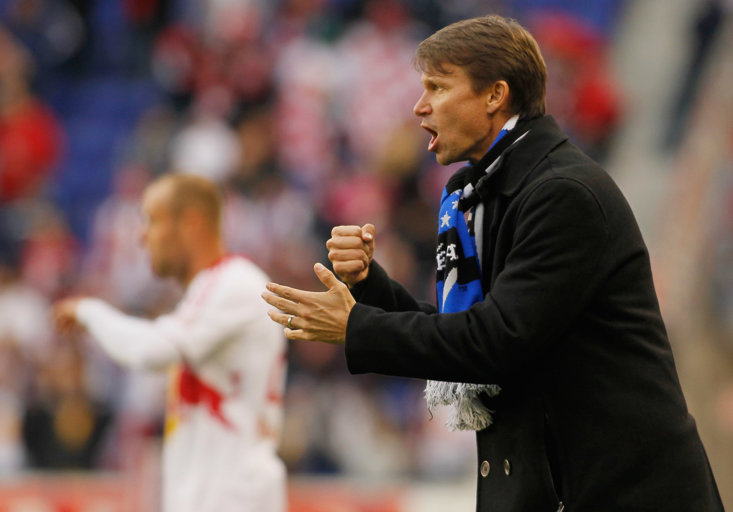 After three years gaining some much-needed experience to develop his coaching philosophy, Marsch was then offered his first taste of football across the Atlantic and into Europe as he became RB Leipzig’s assistant coach in 2018. The manager that he assisted was none other than current Manchester United boss Ralf Rangnick, where he would have absorbed critical knowledge on how to effectively implement a similar style of his own.

The higher-ups at Leeds have reportedly been tracking him for two years mainly because they see his style as similar to Bielsa’s. Marsch adopts a high-pressing style (the famous ‘gegenpress’) which he adopted following his work with Rangnick. It’s a style that is understandable to have drawn the attention of Leeds, as it wouldn’t deviate the current crop of Leeds players too far from what they are already used to, but also strike up a stronger balance so that the defence isn’t left isolated if the opposition are on the counter-attack.

The Wisconsin-born coach was charged with organising team training sessions as well as preparing them for each opponent. It was a successful campaign, they may have bowed out third in the group stage of the Europa League but the club finished the Bundesliga in third and also reached the DFB-Pokal final. However, it was another short-term role for the American as he left his role at the end of the 2018-19 season. He switched Germany for Austria as he was handed the managerial role at sister club RB Salzburg, taking over from Marco Rose who had taken over Borussia Monchengladbach.

In his first real opportunity to build his credentials in Europe he did not shy away from the challenge. Having effectively implemented an aggressive pressing style which was helped by learning under Rangnick, Marsch delivered instant success with the Austrian Bundesliga club. He led them to a domestic double in both 2019-20 and 2020-21. In his first year in charge, RB Salzburg won 68.75% of their league games as they finished 12 points ahead of Rapid Wien.

He also got to work with Erling Haaland for six months, helping the Norwegian star establish himself as the goal machine we have seen today. He may have only spent six months working with the striker, but it was clear to see that his management had a positive effect on the superstar’s upward trajectory.

Ahead of his imminent arrival in West Yorkshire, his work with Haaland should spell promising things for Patrick Bamford but more importantly, young striker Joe Gelhardt who has already shown such promise in his breakout year for the Whites. Marsch is keen on bedding in young players, which is exactly what Leeds fans love to see, and there is an array of talent already among the first-team squad that he would be itching to work with.

Following his fine work in Austria, Marsch earned a return to RB Leipzig ahead of 2021-22, this time as head coach. He inherited a very successful side from his predecessor Julian Nagelsmann, who had left for Bayern Munich after guiding Leipzig to a second-placed finish. Marsch was able to win his first league game in the Bundesliga but results did not continue to get better. With the club on the brink of elimination from the Champions League, and five wins from 14 in the league, he left the club by mutual consent in December after just four months in charge.

His early departure from Leipzig should not concern the Elland Road faithful as his CV preceding the latest role has been more than impressive. It is an uphill battle for Leeds to become a lot more organised at the back in the Premier League but Marsch isn’t just here to guide them to safety. He’s here to become the architect of the next stage in their history and help take their project to the next level.

Leeds are 4/9 to stay up with Betfred*