British Formula One racing driver Lewis Hamilton has won five of the past six Drivers Championships, including the last three consecutively. With six in total from his 13-year professional F1 career, he is second in the all-time list with just Michael Schumacher (7) ahead of him. Hamilton holds the third-best win percentage of all time, recording a 33.6% win percentage throughout his career, the best record of any driver with over 50 races under his belt since his compatriot Jim Clark in the 1960s.

“Lewis is very good, he is absolutely one of the best but he is not God. Maybe God is with him.”

Those of the words of the youthful and eager Max Verstappen, a man who broke onto the scene as a boy in 2015 - his steely, determined Dutch gaze belying his youth. This is a racer revelling in going tête-à-tête with more experienced competitors, year upon year, and vying to accomplish what his F1 father Jos never could: the elite Championship. Last season he won three races and finished third in the championship behind Hamilton and Valtteri Bottas.

“I feel good and I feel ready for it,” the younger Verstappen said (via The Guardian), “that is most important. I don’t really think about what my advantages over Lewis might be. I just focus on myself. I trust in myself.”

That self-belief will become even more evident at the start of the 2020 season, with the curtain-raiser at Melbourne on March 15. Hamilton is already gearing up while Verstappen has staunchly set out his intentions. Asked whether he can topple six-time champ Hamilton, Verstappen was clear:

“Yes. It is very car-dependent, of course. When you can put the pressure on, of course it is a lot harder for the guy in the lead.

"If you never really have pressure, you can drive at 97-98% and you never make mistakes, or maybe one weekend out of 21-22. Even if we start within 0.2secs, you can really mount the pressure and I would like to start straight away there because then it is really on.”

The Red Bull racer remains the youngest driver to start a race (at the 2015 Australian Grand Prix, aged 17)  and win (at the 2016 Spanish GP). It’s unlikely the former record will be broken in the foreseeable future, with the licence restrictions subsequently being raised to 18. 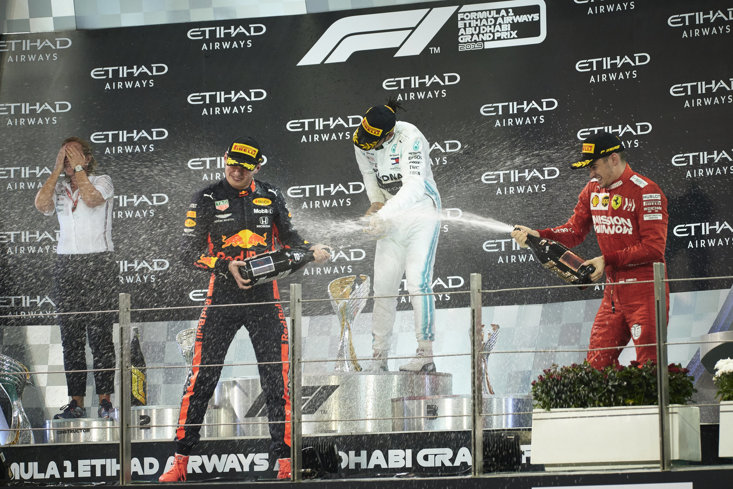 With Sebastian Vettel still retaining the record for youngest World Drivers Championship holder over the past decade, having done so at the age of 23 years and 134 days, with Verstappen still just 22 years old, and not turning 23 until after the season’s end, if he takes the championship this year he will become the youngest F1 champion in history. Charles Leclerc of Ferrari, also 22, will be vying for the record. And speaking of Ferrari…

There has been fervent speculation ongoing, even before the conclusion of the 2019 calendar that Lewis Hamilton will move to the rival constructor upon completion of his Mercedes contract which expires at the end of the upcoming campaign. Hamilton has raced with a Mercedes engine ever since his rookie season in 2007, their 250 race entries together a far-away record.

But an extension on his current tenure hasn’t been exactly forthcoming. In December, Hamilton took to Instagram to state that he and Mercedes F1 boss Toto Wolff “have not even spoken about a contract yet. Nothing is being negotiated currently."

Similarly, Hamilton’s rival Vettel nears the end of his legal obligation to Ferrari, but the suggestion that a return for the German to Red Bull - with whom he won four championships between 2009 and 2014 - has been denounced by the manufacturer’s motorsport advisor Dr Helmut Marko. In conversation with German publication Motorsport-Magazin, Marko disclosed: “With Max's extension, I can't imagine two Vs [Vettel and Verstappen] with us. It is very difficult financially alone."

Not only does the infer that this driver merry-go-round has creaked to a halt, but the financial aspect may very well have a direct effect on the 35-year-old Hamilton ending his prestigious career with the Italian giants. On Christmas Eve eve, 2019, Charles Leclerc sealed his Ferrari future with a brand-spanking new five-year deal until the end of the 2024 season (remember, he’ll still only be 28).

The chances for Hamilton being the Cavallino Rampante spearhead when they’ve already placed their faith in the hands of the Monégasque young buck, are looking extremely remote.