Sunday proved a chaotic day in F1 as Max Verstappen won a wet Emilia Romagna Grand Prix in Imola while Valtteri Bottas and George Russell clashed in what were treacherous conditions.

The track had been affected by rain which made for testing conditions for all of the drivers at the start of the race. Red Bull’s Verstappen, though, started third on the grid but overtook Lewis Hamilton on the first lap and stayed ahead, opening up a five-second lead to take the victory.

British seven-time champion Hamilton saw his chances of winning dented when he came off the track. He reversed and pulled off an impressive recovery. The delay was a blow but he put in a sterling display to come back from the eighth spot to clinch second place while McLaren’s Lando Norris, still only 21, came third for a podium finish. 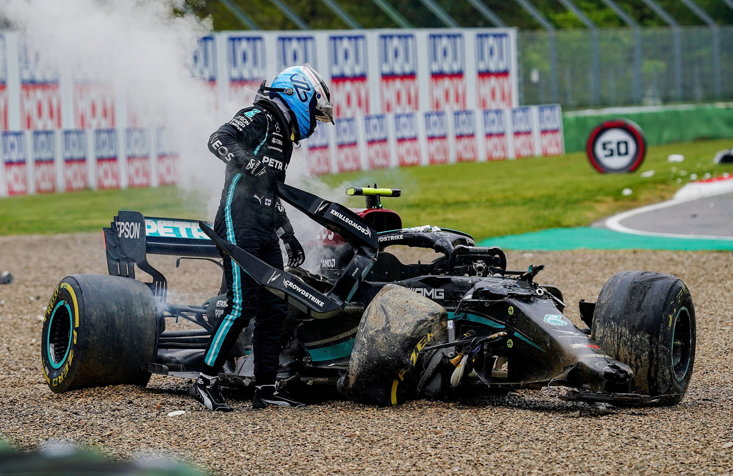 On Lap 32, Bottas and Russell’s cars collided in a massive crash leaving the former winded after Russell had attempted to make his way through but ran onto the grass. The young Englishman asked, “What the f*** was he doing? Honestly, he is a f****** p****” before appearing to slap the Finn on the helmet after he got out of his car. It wasn’t immediately clear but Bottas may have impeded his rival. Following the red flag to clear up, Verstappen half-spun but managed to get going again, the advantage he had built up coming in handy.

Christian Horner, Red Bull team boss, told Sky Sports, "We should have taken more points out of Mercedes today. There is still a long way to go. Max got a mega start. Thereafter he controlled the race brilliantly.

"It is always tough to lose a race like we did in Bahrain. To come here and get that victory, there is only one point between the two drivers. It is by far the best start we have had. We want to build that momentum.

"We have a good car. We can see Mercedes are still very, very quick. Their deg is better than ours. Lewis got the fastest lap by a decent margin. We will have to go some to keep them under pressure."

Hamilton meanwhile, said, "First off, congrats to Max, he did a great job. Solid work from him. And also to Lando. What an awesome job and so good to see McLaren back up there.

"On my side, it wasn't the greatest of days. First time I've made a mistake in a long time, but I'm grateful I could bring the car home.

"There was only one dry line and I guess I was in too much of a hurry to get by everyone. Came onto the inside and I could see it was wet but it just wouldn't stop and sent me off. But fortunate we got to get going again and get some points for the team.

"I was just trying to get over the gutting feeling when you make a mistake and moving on from it and learning from it - then get back into racing spirit and we still had some really fun battles with the guys."

Next up is the Portuguese Grand Prix in the Algarve in two weeks’ time.