Manchester United’s starting XI is one hell of a team. It took extra-time and a host of substitutions to do the job, but Ole Gunnar Solskjaer’s side booked their place in the quarter-finals of the FA Cup thanks to a Scott McTominay goal in the 1-0 win over West Ham on Tuesday. The Norwegian will be thankful that his A-Team was on hand when he needed them.

With Bruno Fernandes perched on the Manchester United bench alongside McTominay until the 73rd minute, this game was a stark reminder of what the Red Devils were like before the Portuguese’s arrival. To all intents and purposes, Donny van de Beek is a more than capable replacement for Fernandes, yet the home side looked slow and ponderous on the ball and unable to cut through a resolute West Ham backline for as long as the Dutchman was the man in the number 10 position.

With 30 goal contributions in all competitions this season, Fernandes is every bit as important to Manchester United as Harry Kane is to Tottenham. Simply irreplaceable. The side just cannot function in the same way without him, and their performances suffer greatly without him as a result. Of course, there is nothing wrong with being reliant on a world-class player, in fact it is almost expected for any top team, but United struggled to find that spark without him.

However, once Fernandes and McTominay entered the fray and United had their full-strength side on the pitch, they were a different animal. As we have seen this season, there are few sides that can handle this fluid and pacy United attack, and West Ham’s back line began to creak once the changes had been made. Fernandes’ passing was incise and quick while his touches were as clever as ever, and Anthony Martial and Marcus Rashford looked invigorated by his arrival. 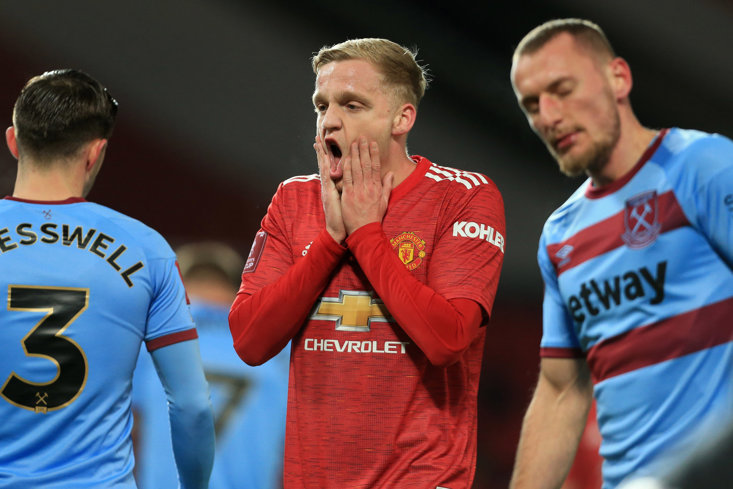 McTominay’s influence was also huge from the bench, and not just because he grabbed the goal in extra-time that would eventually settle this tie. It is a huge credit to the 24-year-old that his partnership with Fred has brought more stability and energy to the base of that midfield and allowed the likes of Fernandes to flourish. And his athleticism meant that United looked so much more dynamic compared to when the declining Nemanja Matic was on the field. His run into the box and clever first-time finish showed the aspects to his game that his Serbian colleague does not have.

"Scott used to be a striker and I think he finishes with authority," Solskjaer told the BBC afterwards. "You see that he doesn't mind being in those positions. He just smashed the ball into the net."

The manager also admitted that it hadn't all been plain sailing. "I think we got about 15 to 17 shots in the end but we need to be more clinical," he added. "We should've finished the game off earlier and finished in 90 minutes but sometimes it doesn't happen. We needed to have a good result and a good feeling after today because we were low after the Everton game. It's hard to take but they were really focused and did the job."

David Moyes’ side offered no great surprises and defended with great commitment throughout, as they have done all season, but their lack of a natural striker and the forced substitution of stand-in number nine Andriy Yarmolenko hampered their attacking ambitions. Solskjaer would have known what lay ahead of his side tonight, yet with a lack of excitement and ambition on the pitch and without the Old Trafford crowd to roar them on off it, his side looked lacklustre for the majority of the game.

For years United have struggled to put a competitive starting XI on the pitch, and now they certainly have that. Not since the days of Sir Alex Ferguson has the first team boasted so much quality and class, but questions must still be asked about the depth of this squad. Van de Beek is always going to find it tricky given that the man he is being directly compared to is arguably the best attacking midfielder on the planet at the moment, but he still hasn’t quite settled in Manchester.

Solskjaer’s men still look short at centre-back, Matic is a shadow of his former self in midfield and up front they are still lacking that potent number nine, with Anthony Martial looking off the pace and Edinson Cavani unlikely to provide a long-term solution.

United have taken great strides forward this year but will their incredible starting XI be enough to paper over the cracks made by the rest of their squad and ultimately bring them silverware? For as long as they can keep relying on Fernandes and McTominay, they are a threat at the very least.