Rugby League
News
We round up an exciting first round from Down Under as the National Rugby League got underway
Kris Voakes
16:46, 14 Mar 2021

Just 24 hours on from the retirement of Cameron Smith, Melbourne Storm fans were given a real glimpse of what the post-Smith era will look like as Ryan Papenhuyzen stole all the headlines in round one of the NRL season.

The 22-year-old full-back, who won the Clive Churchill Medal as Man of the Match in last season’s Grand Final win over the Penrith Panthers, burst out of the blocks with two tries, one assist and three goals in the first 30 minutes as Storm blasted South Sydney Rabbitohs out of the water with a blistering start which saw them lead 22-0.

While the Bunnies fought back to narrow the deficit significantly, a pair of Papenhuyzen penalties in the second half helped to ensure the Storm held on to win 26-18 in front of almost 12,000 fans at AAMI Park.

In the pick of Friday’s games, Brisbane Broncos somehow managed to squander a 16-0 half-time against the Parramatta Eels at Suncorp Stadium. David Mead had opened the scoring for the Broncos, and when Xavier Coates grabbed a double it appeared that the home side we’re home and hosed.

But the Eels came out a different side after the interval, and tries from Reed Mahoney and Clint Gutherson blew the game open. Blake Ferguson’s try then levelled the scores, with Mitchell Moses’ conversion giving the Eels their first lead of the match. And Junior Paulo’s late try ensured a 24-16 comeback win for Brad Arthur’s side.

Sydney Roosters got their season off to an absolute flier, destroying Manly Sea Eagles 46-4 at the SCG. James Tedesco and Brett Morris each collected hat-tricks as the Chucks racked up nine tries in total against a Manly side who were well in the game early on after Reuben Garrick’s ninth-minute try had levelled the scores at 4-4. 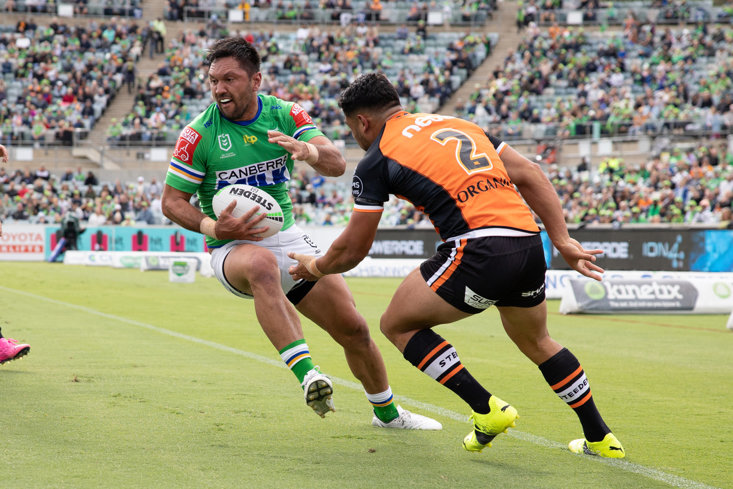 Last season’s losing Grand Finalists got off to a great start, Penrith shutting out the North Queensland Cowboys in a 24-0 win. A dominant first-half display might have only resulted in a single Kurt Capewell try, but after the break a nine-minute burst saw Dylan Edwards, Brian To’o and Isaah Yeo cross to put the game beyond the Cowboys, whose new head coach Todd Payten later insisted he was right to limit Jason Taumalolo’s minutes after playing the Tongan for only 51 minutes.

In Sunday’s action, the Brit-heavy Canberra Raiders welcomed back England hooker Josh Hodgson after his second ACL injury against Wests Tigers and routed the Sydney-based outfit 30-12 thanks to tries from Jordan Rapana, who scored twice, Ryan James, Hudson Young and Charnze Nicoll-Klokstad. Meanwhile, Cronulla Sharks beat St George-Illawarra Dragons 32-18, which was briefly halted by an on-pitch melee at the Kagarah Oval between both sets of players.