We know, we know, the words Formula 1 are never normally followed by the phrase ‘everyday driving’. Lewis Hamiliton is not going to pop out for some sourdough and a pint of almond milk in his F1 car, is he? Well, thanks to those super clever guys at Mercedes, this is exactly what Lew could be doing in the very near future.

Because right now, in an underground (possibly) bunker befitting every James Bond movie ever made, Mercedes are putting the very finishing touches to ‘The One’, their £2.4million limited-edition hypercar, that’s a totally legal F1 car for the road. Yes, that’s right, an F1 car for the road. Mind blown. 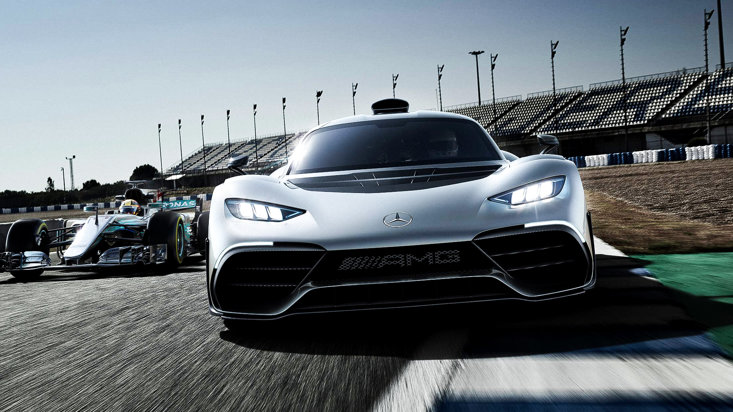 Let’s start with the engine. It’s stolen. Direct from six-time world champion Hamilton’s very own F1 car. In total 275 models are set to be produced, and each of them will be equipped with the 1.6-litre turbocharged hybrid powertrains that have helped Mercedes win the constructor’s championship for the last six years in a row. 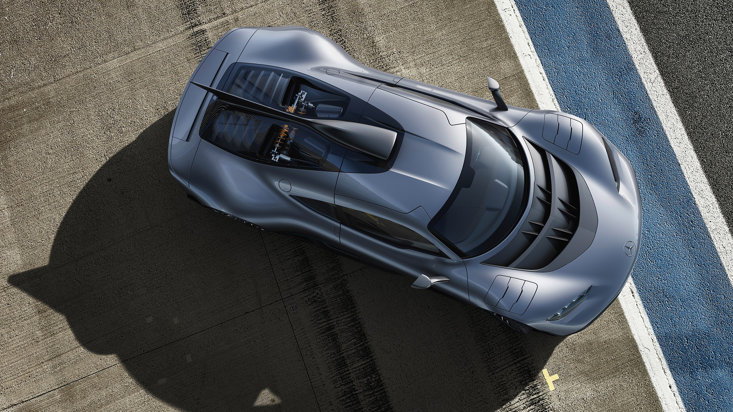 Four electric motors will combine with the six-cylinder petrol engine to produce around 1,000hp. And check this stat out - ‘The One’ does 0-124mph in less than six seconds. One, two, three, four, five, six. Boom. Most sports cars will only reach half that speed, in that time. To steal from the legendary Stone Roses, if we may be so bold - This Is The One..

And it’s not just the engine that’s lifted from their F1 car, the lithium-ion batteries and the system used to cool them are used too. The only difference being that ‘The One’ has more of them, in order to boost the zero-emissions driving range. Plus there’s a plug-in socket so you can replenish electricity from the mains. These guys have it all covered. 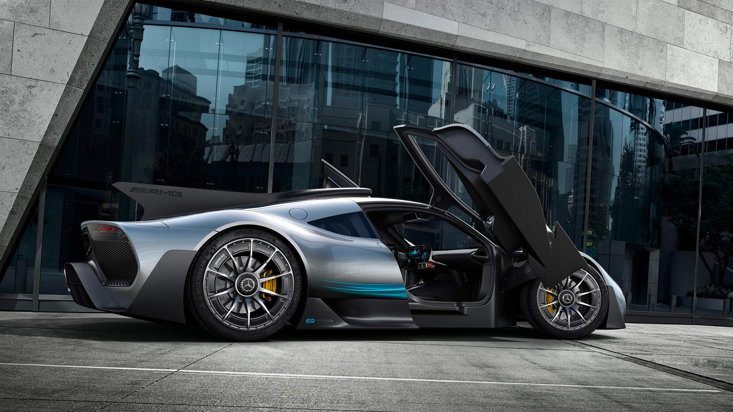 Mercedes say drivers (aka lucky sods) will be able to switch between a range of driving modes, including ‘highly dynamic’, that's similar to the setting used by Hamilton and team-mate Valtteri Bottas. Living the dream. It can also be driven in an all-electric mode, to potter through town and city centres in silence - similar to conventional hybrid cars. We’re going to go out on a limb here, but we can’t see too much pottering being done in this car.

Inside it’s a case of ‘Formula 1 for two’, Mercedes words, not ours. Lucky passengers will sit in carbon-fibre bucket seats, with the driver facing a rectangular steering wheel, surrounded by switches and dials similar to the complex, high-tech ones, used in F1. Two 10-inch display screens ride the dashboard, feeding information to the person controlling almost 1,000hp with their right foot. Just imagine that. A third screen is linked to a camera at the back of the car and acts as a rear-view mirror, you know, so you can get a firm view of those you’ve left in your wake. 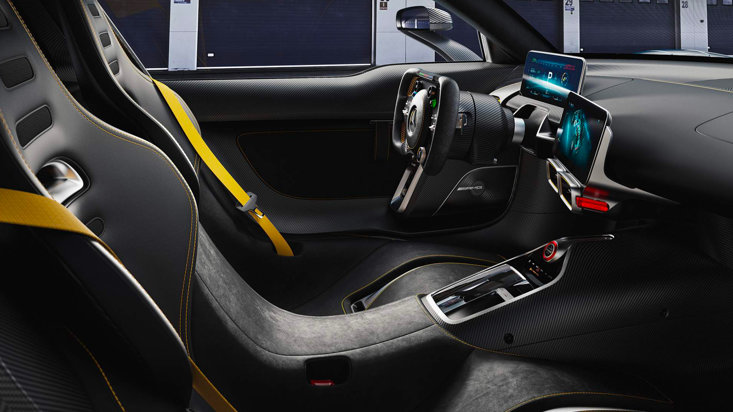 The final production version is set to be released later this year but all 275 models have already been sold, that’s £660 million worth of car right there! This incredible venture marks Mercedes out as the first car-making F1 competitor to use a complete Formula 1 drive unit for a hypercar, with road approval. Pushing the boundaries, yet again.

It’s everyday driving, but not as we know it. 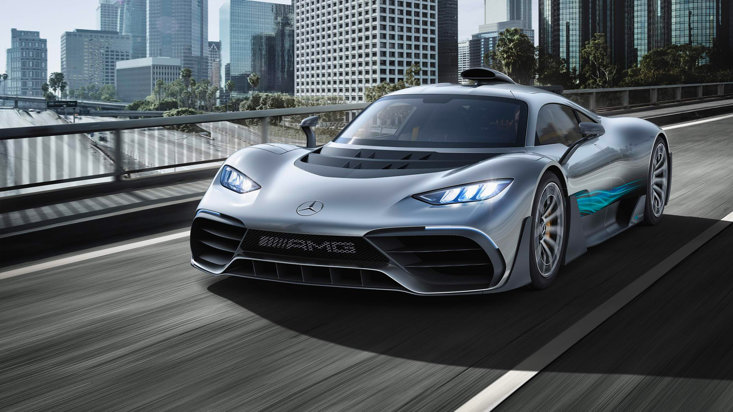 ©Mercedes
x
Suggested Searches:
Tyson Fury
Manchester United
Marcus Rashford
Lewis Hamilton
F1
Air Jordan
More
motorsport
Why Next Season Is More Than Just About F1 Immortality For Lewis...
After signing a new mega-money one-year contract with Mercedes, Lewis Hamilton is on the verge of Formula [ ... ]
motorsport
Extreme E Recruit F1 Champion Jenson Button As New Team Owner...
He’s one of a record 10 British men to win a World Drivers’ Championship. And now Jenson [ ... ]
motorsport
Japan’s First Hypercar Is A £2.6M, 1,985HP, All-Electric Beast
Japan is as much the Land of Incredible Tech as it is the Land of the Rising Sun, so it’s a little [ ... ]
motorsport
The Striking, Limited-Edition Aston Martin Bowmore DBX Inspired...
Ask the person on the street which drink one would imagine should be paired with the driver of an Aston [ ... ]
motorsport
The No-Nonsense Minimalist Electric Bike That’s Capable Of Hitting...
Electric bikes are here to stay and as we enter a new year, things seem to be stepping up a level. Again. [ ... ]
motorsport
The 1,200BHP, £595,000, Souped-Up Supercar That’s Totally Road-Legal
Ever heard of Zyrus? The Norwegian supercar tuners make supercars even more special and they don’t [ ... ]
motorsport
Made For The Moon, This NASA Concept Motorbike Is From Another...
If you believe they put a man on the Moon, you best believe that they wanted to put a motorbike on it. [ ... ]
motorsport
Hold Tight! At 218MPH, The 824HP Sabre Is McLaren’s Fastest...
Things just got serious and McLaren have just taken things up a notch. The British auto manufacturers [ ... ]
motorsport
The All-Electric Stardust Bike That Makes Driving Through Snow...
As we’re stuck smack bang in the midst of snowy season, you probably aren’t in a rush to [ ... ]
motorsport
The Steve McQueen Inspired Electric Bike That’s Super Lightweight...
Let’s be honest, 2020 hasn’t had a whole lot of positives but it has been the year of the [ ... ]
motorsport
The £5m, 840HP, Jet-Inspired Hypercar Paying Homage To An Italian...
The Frecce Tricolori are a national symbol of Italy. For those who don’t know, they are the Italian [ ... ]
motorsport
The 255MPH, 1,877HP, Concept Jaguar Hypercar You Can Only Drive...
Just before Christmas Jaguar unveiled the cutting-edge Vision Gran Turismo SV, an all-electric custom [ ... ]
motorsport
From Sea Supercar To Bulletproof Yacht, Feast Your Eyes On The...
There are few greater feelings than being on the open road, soft top down and the sun shining. However, [ ... ]
motorsport
From 205MPH Speedster To Eco-Friendly Wonders, Behold The Best...
We’ve got the need, the need for speed. Anything with a motor, or a battery given it is 2020, [ ... ]
motorsport
Aston Martin Racing Pay Tribute To Track Success With Three-Car...
Fancy starting a collection of Aston Martins? Well, you might be able to start your ode to one of Britain’s [ ... ]
motorsport
211MPH, 0-60 In 2.6 Seconds, 780 BHP, It's The Supreme Supercars...
Whether you’re all about aesthetics and being noticed by passers-by on the street or have a desperate [ ... ]
motorsport
The £800,000, 860HP Say 42 Yacht Is A Supercar Made For The...
What do James Bond and Roman Abramovich have in common? No this isn’t an early Christmas cracker [ ... ]
motorsport
The Super-Charged 800HP Hennessey Venom 800 Is Ford’s Most Powerful...
With over 700 horsepower under its hood, the Hellcat V8-powered Ram TRX is, in terms of performance, [ ... ]
motorsport
The Magnificent Mazu 82 Is The Bulletproof Superyacht With Lashings...
The new Mazu 82 superyacht looks like it’s straight out of central casting for a Bond villain's [ ... ]
motorsport
It's The £12M Penthouse With A 205MPH, 765LT McLaren Supercar...
A decent way to flog a house? Throw in a car to boot. No better method to sweeten the deal than to marshall [ ... ]
motorsport
Ducati’s Diavel 1260 Lamborghini Superbike Is Pure Art From...
Unconventional, unique, unmistakable. That’s how Ducati have described their brand new Diavel [ ... ]
motorsport
Behold The Vulcan! The Iron Man Bike Destined To Replace The...
For an entire generation, the word Vulcan meant only two things: Britain’s immense looking strategic [ ... ]
motorsport
Three Electric Super Bikes We Can’t Wait To See And Not Hear...
Within our lifetime there will be a generation of children who will have never heard the sound of a [ ... ]
motorsport
The Naran Hyper Coupe Is The 1048bhp V8 Beast Bursting With...
Whisperings of the Naran first began a few years ago, nothing more than a mention of a supercar project [ ... ]
motorsport
The Elation Freedom Is The All-American Electric Hypercar That...
The American muscle car. For decades, the leading light in the American automobile industry but now, [ ... ]
motorsport
The 360-Foot Yacht With Four Pools, A Helipad And Beach Club...
It’s official, the yacht industry has gone bonkers. An invention of the Dutch back in the 16th [ ... ]
motorsport
The 211MPH SF90 Spider Convertible Is Ferrari's Most Powerful...
When Ferrari’s SF90 Stradale broke the Top Gear lap record by 1.4 seconds, people sat up and took [ ... ]
motorsport
The BMW Electrified Wingsuit Capable Of Soaring Through The...
To say this year has been a turbulent one would be an understatement and now, well, people can fly. [ ... ]
motorsport
The Supercar Factory That Gets You To The Shops And Back At...
If you were a teenager in the late 80s and 90s, then there’s a high chance you’ve already [ ... ]
motorsport
Mrs Bond’s Mercury Cougar Could Be Yours For £100k Next Month...
It’s the car Dianna Rigg gave a damn good thrashing in the sixth Bond outing, On Her Majesty’s [ ... ]