Sports
News
Here are five sport stories that might have passed you by this weekend
Elliott Bretland
12:53, 01 Feb 2021

Lionel Messi continued to boggle the mind with the 650th goal of his Barcelona career, Patrick Reed kept his cool to triumph at Torrey Pines, while Judd Trump claimed victory at the German Masters… in Milton Keynes. We’ll explain why as we take you through five sports stories you may have missed this weekend…

The hyperbole-defying Lionel Messi scored his 650th (SIX HUNDRED AND FIFTIETH!) goal for Barcelona at the weekend, curling a sublime free-kick past Athletic Bilbao keeper Unai Simon on the 20-minute mark. The goal was the Argentine wizard’s 456th in La Liga and 49th from a direct free-kick.

Athletic Bilbao defender Inigo Martinez, who had the misery of marking Messi, said, “We all know Messi's quality. When he's all fired up like he was today he scores goals like that and there's nothing you can do about it."

The win, Barca’s fifth in a row in the league, moved Ronald Koeman’s men above Real Madrid on goal difference into second place on 40 points, 10 behind leaders Atletico Madrid, who also have a game in hand. 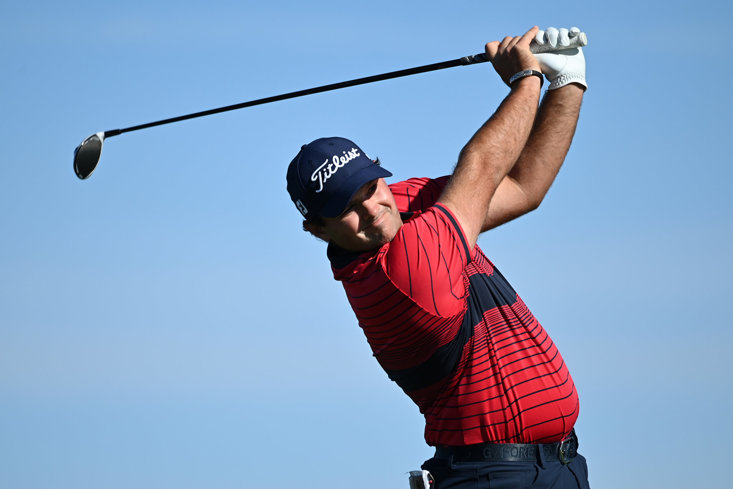 Patrick Reed made light work of the Farmers Insurance Open to claim his ninth career title on Sunday. The American triumphed with a five-shot victory at Torrey Pines in California having at one stage been tied with Carlos Ortiz of Mexico at 10 under.

Reed, a former Masters champion, received a controversial free drop on the 10th two days earlier and kept his focus to claim the win.

"I hung in there after everything that transpired yesterday," he said. "I felt mentally strong throughout the round.

"When I spoke to the rules officials [about the free drop] they said I did everything I could. I felt great throughout the day. I was able to go out there and shoot a low number and get the job done."

Earning an eagle on the sixth, Reed birdied the seventh and went on to record a front half of 33 in a four-under-par 68. Rory McIlroy, meanwhile, finished one over to claim 16th place, six under par.

The Welshman scooped the £60,000 prize and secured the final remaining place in this year’s Premier League Darts. Clayton fought back from 5-3 down to win 11-8 and told ITV Sport, "It was my first time in the final and to get over the line is amazing. He went to sleep for a couple of legs and I took advantage. I've been hoping for a place in the Premier League so to hear that was amazing and I'm over the moon, absolutely chuffed to bits."

King was left to rue missed chances and said, "I can't tell you what happened because I've got no clue - it just did not feel right. I was just hoping I could hang in to the last leg but we didn't get that far and Jonny played some cracking darts." 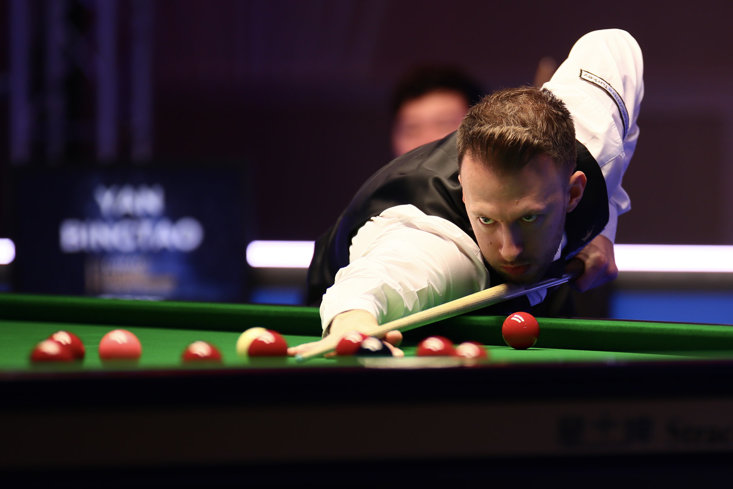 The name Trump hasn’t fared so well in 2021 so far but Judd Trump changed all that by winning the German Masters. The world number one defeated Jack Lisowski 9-2 in stunning fashion to claim his fourth ranking event of the season.

Trump won the same tournament in Berlin last year, but the Covid-19 pandemic meant this edition of the event was held in Milton Keynes at the Marshall Arena. The Englishman took advantage of playing on home soil and hit one brilliant shot so well - nailing the brown before the ball spun back to set him up for another pocket - he even showed it off later on social media. The 31-year-old was in blistering form, claiming seven frames in a row as well as five half-centuries.

Coronavirus Continues To Play Havoc With Formula One

The global pandemic continues to leave a cloud of uncertainty over all sports this year, with F1 affected again - Frenchman Pierre Gasly has become the sixth driver to test positive for coronavirus. The Alpha Tauri driver, who won last year’s Italian Grand Prix, insisted he was "feeling OK and will continue to follow my training plan from home while I am in isolation".

Champion Lewis Hamilton is the most high-profile name to contract the virus and missed the Sakhir Grand Prix, with young prodigy George Russell stepping up from Williams to fill in for Mercedes. Sergio Perez and Lance Stroll of Racing Point also missed races due to Covid-19, as did McLaren’s Lando Norris and Ferrari’s Charles Leclerc. Gasly’s positive test means that 30 percent of the grid has now been affected since the start of the pandemic 12 months ago.

x
Suggested Searches:
Tyson Fury
Manchester United
Marcus Rashford
Lewis Hamilton
F1
Air Jordan
More
sports
Amateur Sport To Be Allowed In England From 29 March
Outdoor grassroots sports will return in England from 29 March, prime minister Boris Johnson confirmed [ ... ]
sports
Brady's Bromance, Nadal's City Of Love And The Greatest Love...
Roses are Red,  Violets are Blue, We live for sport, And we know you do, too! Valentine’s [ ... ]
sports
The Socially Distant Sports Bar Is Like Being In The Pub With...
The day will come. We’ll be back. The beloved British pub will fling its doors wide open once [ ... ]
sports
The Six-Day Plan That Can Turn You Into A Hollywood Hardman...
Is there an actor who represents the quintessential British hardman better than Jason Statham? Probably [ ... ]
sports
It’s Mahomes vs Brady At The Super Bowl, Five Sport Stories...
In a weekend which saw UFC 257 and the FA Cup grabbing a lot of attention, there was plenty of other [ ... ]
sports
Daniel Craig's Full-Body Bond Workout That Will Turn You Into...
The release of No Time To Die is a bittersweet one. On the one hand, after months of Covid-induced delay, [ ... ]
sports
The Super-Quick Routine Jason Mamoa Used To Get Ready For Aquaman
Is Jason Mamoa the coolest actor in the world? Maybe. The Guinness swigging, axe-hurling Hawaiian actor [ ... ]
sports
Max Holloway Is A UFC Record-Breaker, Five Weekend Stories You...
All the attention might have been on the anti-climax that was Liverpool vs Manchester United this weekend, [ ... ]
sports
From Fernando to Maradona, These Are Five Of The Best Sports...
Yep, back again. Nope, not out and about, meeting up with our mates or heading to the football but instead [ ... ]
sports
The Five Key Moves Cavill Uses To Get In Supernatural Shape...
Netflix’s TV series adaptation of The Witcher proved to be one of the most popular shows to land [ ... ]
sports
Work Out Like A WWE Superstar With John Cena’s Five-Day Training...
He’s widely regarded as one of the greatest professional wrestlers of all-time, has nearly 15 [ ... ]
sports
Conquer Those New Year Resolutions With These Five Fantastic...
During the first quarter of 2020 fitness apps were downloaded a staggering 593million times. Factor [ ... ]
sports
Work Out Like Hollywood’s Hardest Worker, Mark Wahlberg, With...
Mark Wahlberg hits the big 5-0 this year, and in those five decades the man from Boston, Massachusetts [ ... ]
sports
Why The History Channel’s Arctic Edition Of Alone Is Unmissable...
There have been a plethora of crazy TV series in recent years, take The World’s Toughest Race  [ ... ]
sports
Cheeky Chappie Jimmy Bullard’s Fishing Pod Is A Remarkably Down...
Fishing is one the sports that has seemingly proven immune to COVID-19 restrictions. You’re (usually) [ ... ]
sports
The Women’s Six Nations, Eubank Jr And Trump Are The Weekend's...
We may all be stuck inside but sport is continuing for now, which means some things may have slipped [ ... ]
sports
Boost Your New Year Goals With These Five Essential Bits Of...
Running is one of the simplest forms of exercise someone can do to stay in shape but that doesn’t [ ... ]
sports
In Time To Play Hulk Hogan, Here's How Chris Hemsworth Got God-Like...
Chris Hemsworth took Instagram by storm in November when a picture posted by the Australian actor, of [ ... ]
sports
The Weight-Lifting Workout Brad Pitt Used To Create His Fight...
It’s been more than twenty years since the David Fincher masterpiece Fight Club premiered for [ ... ]
sports
Build Muscle And Burn Fat With These Three Bodyweight Routines...
Health kicks can certainly be expensive but that doesn’t mean that they have to be. Sure, if you’re [ ... ]
sports
Steph Curry Hits Career Best, Five Weekend Sport Stories You...
Steph Curry continues to set the pace in the NBA, there was drama, controversy and recrimination on [ ... ]
sports
Olympic Skier Graham Bell’s Positive Podcast Makes Sure You...
Graham Bell is used to navigating slippery slopes. The former Olympic skier who once hit a top speed [ ... ]
sports
Weights, Motivation And Cheat Meals, These Are Dwayne Johnson’s...
Dwayne Johnson is a fitness God. Whether it was reaching peak shape to star in WWE, building bulging [ ... ]
sports
The Workout Circuit That Transformed Keanu Reeves Into John...
Keanu Reeves is absolutely killing it at the moment, and we don't just mean literally as hitman [ ... ]
sports
Triple G In 21st Defence, Here’s Five Weekend Sports Stories...
On the final weekend before Christmas we witnessed a bumper package of sporting prowess, there was history [ ... ]
sports
The Home Workout That Keeps Umbrella Academy’s Tom Hopper In...
British actor Tom Hopper’s huge 6’ 5’’ frame is everywhere on the telly at the [ ... ]
sports
Totalling Nearly 10,000 Calories A Day, Here’s What A Strongman’s...
Is Die Hard really a Christmas movie? It’s a debate that rages on every year and splits opinion [ ... ]
sports
Want To Get Shredded Like Bruce Lee? Then This Is The Workout...
Bruce Lee was more than a martial artist. Bruce Lee was more than a man. He combined philosophy and [ ... ]
sports
Arms Like Arnie, The Bicep Workout That Gave Schwarzenegger...
Can you believe this year was the 35th anniversary of The Terminator? That’s three and a half [ ... ]
sports
Neymar Stretchered Off In Tears, Five Weekend Sports Stories...
Beyond that fantastic fight between Anthony Joshua and Kubrat Pulev, the weekend of sport threw up more [ ... ]