Football
News
We may have seen a passing of the torch at Camp Nou this weekend
Simon Lillicrap
15:25, 03 Feb 2020

As the great Lionel Messi threaded a quite ridiculous pass from his own half into the path of Barcelona youngster Ansu Fati, the winger must have pinched himself. Here he was, as a seventeen-year-old being fed passes from one of, if not, the greatest players of all time.

He may have been slightly put off if he’d have realised the magnitude of this reality but instead he calmly took the ball in his stride and fired it through the goalkeeper’s legs for his third Barcelona goal. 90 seconds later, it happened again. Fati nutmegged the keeper thanks to a Messi assist.

Just as we have seen Yoda nurture Luke Skywalker, Mr Miyagi teach Daniel LaRusso and Walter White share his knowledge with Jesse Pinkman, we are again seeing the professor guiding the student. Although these were not Fati’s first goals for the Blaugrana, this felt like a monumental moment for the club.

When Messi was just a floppy-haired teenager, with the number 30 on his back and a cheesy grin on his face, he lit up the Nou Camp for his very first goal. Barcelona’s main man at that time and the star of world football, Ronaldinho, lofted a ball through to him to lob the helpless Albacete goalkeeper Raul Valbuena and the rest is history.

At last count, he had hit 622 goals and recorded 256 assists for his club, a simply remarkable record, yet many fans still point to that first goal as the vital moment the baton was handed from their Brazilian superstar to their Argentine genius. 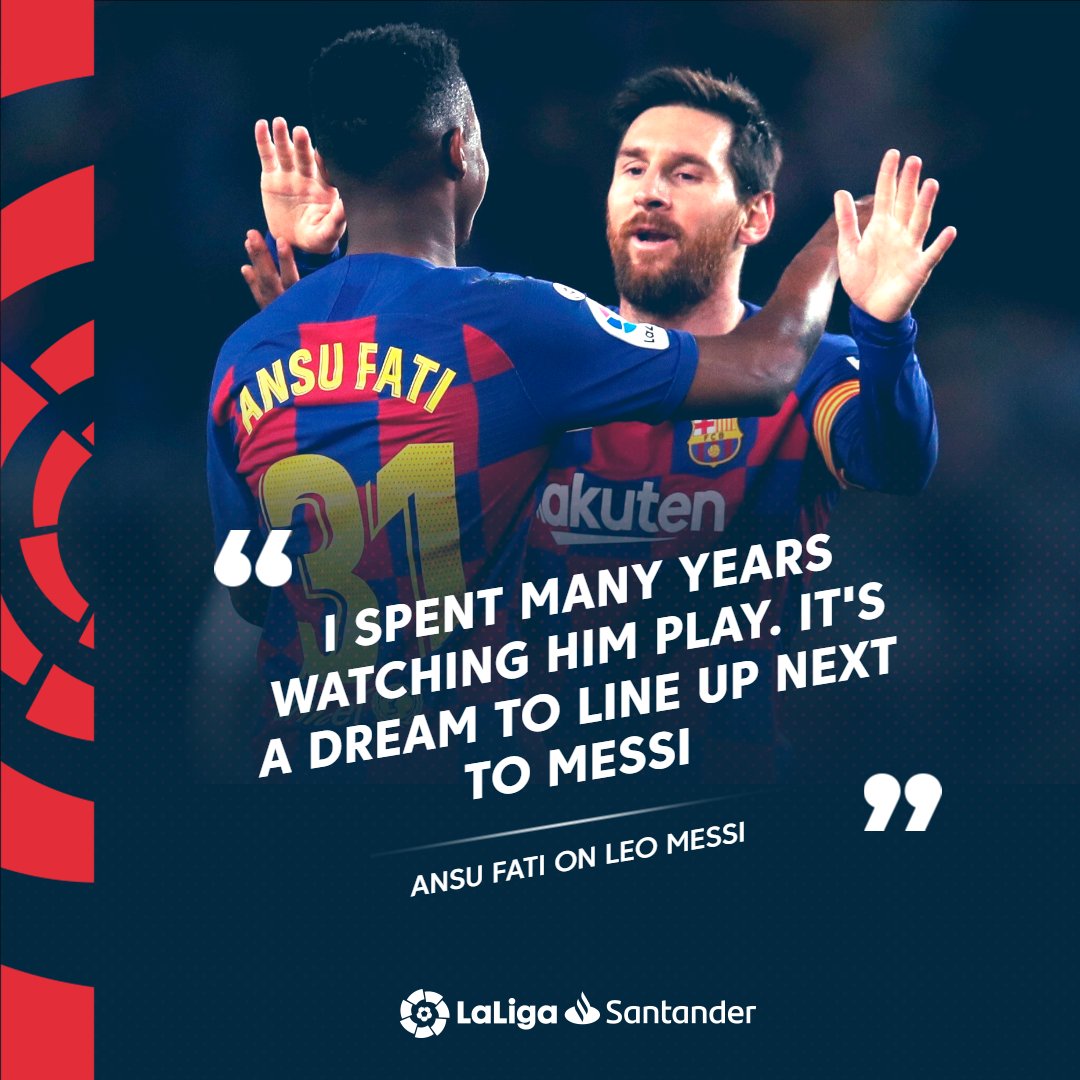 Fast forward fifteen years and although Messi is far from finished, it does feel like this moment could be another defining point in the history of one of the biggest football clubs on the planet. In Fati, they boast a top talent, who at such a tender age is making big strides in the footballing world.

Fati had already become the youngest La Liga goalscorer in Barcelona’s history and the youngest Champions League goalscorer of all time this season but he added another record to his name this weekend, as he became the youngest player to hit a brace in the Spanish top flight.

To give his tender age some context, Messi scored his first league goal at the age of 17 days and 331 days old while Fati beat him by over a year, coming in at 16 years and 304 days old. Remarkable. His date of birth, October 31, 2002, may make you feel the oldest you have ever felt but there is something quite charming about his innocence on and off the football pitch.

He told La Liga in his post-match interview: "I still have doubts whether or not everything that's happening is real. Playing with Messi is a dream."

Nobody is suggesting that Fati will overtake what Messi has achieved in the game, but there certainly seemed to be something symbolic about that mesmerising through ball. Just like Ronaldinho did before him, Lionel Messi may just be crowning the next heir to the throne. 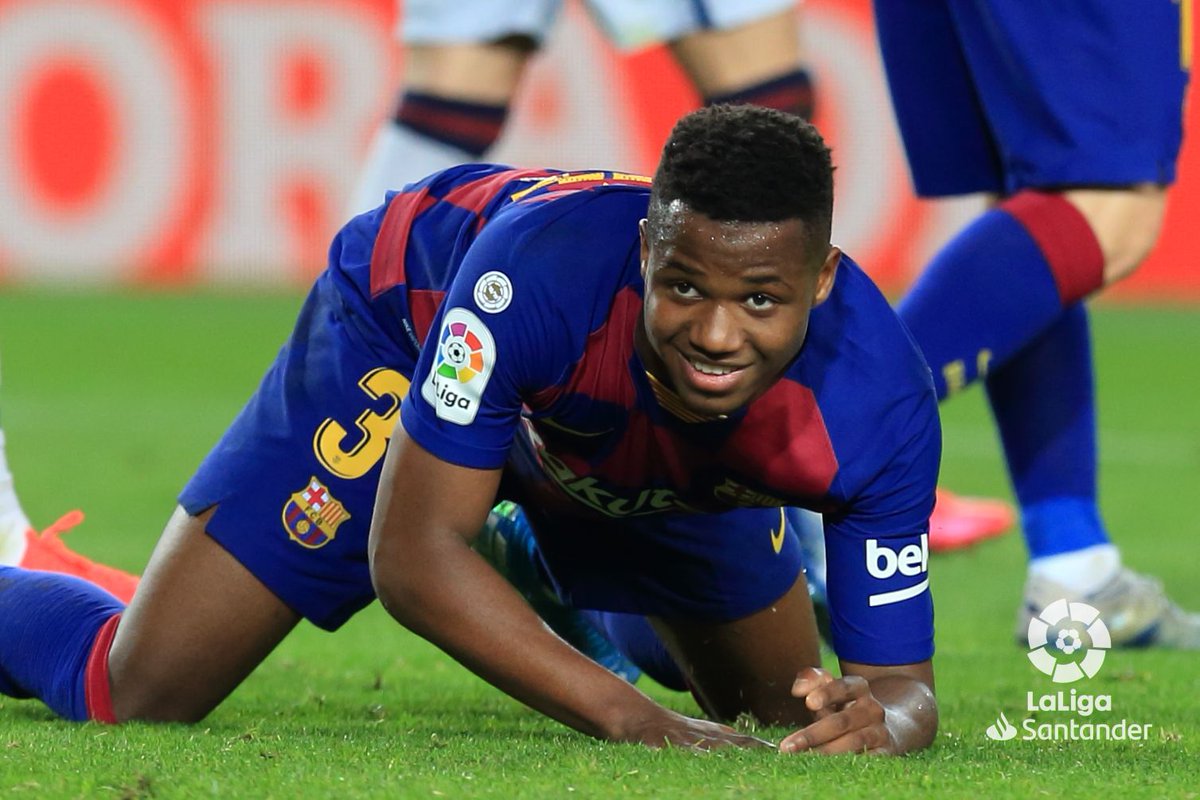 94
533
x
Suggested Searches:
Tyson Fury
Manchester United
Marcus Rashford
Lewis Hamilton
F1
Air Jordan
More
football
Andy Robertson's New Book Lifts The Lid On A Remarkable Period...
On 14 May 2017, Hull City were relegated from the Premier League back to the Championship following [ ... ]
football
Fireworks, Fallouts And Attacking Football, Here's What Tuchel...
Well, it’s Groundhog Day, again. Chelsea are once more preparing to welcome a new manager to the [ ... ]
football
Aston Villa Have Their House In Order, Newcastle’s Is Crumbling...
If the Premier League was a building site, Aston Villa’s terrace would be taking shape nicely. [ ... ]
football
Diogo Jota’s Return Is The Light At The End Of The Tunnel For...
Jurgen Klopp must have some regrets right now. More so than ever before, his decision to play Diogo [ ... ]
football
Forever Lauded For Their Attacking Prowess, Man City Are Shining...
Stereotypes and reputations can be hard to shift. Pep Guardiola’s teams play beautiful, expansive [ ... ]
football
Rooney’s Experience As A Wonderkid Will Pay Dividends For Derby’s...
“Thomas and Wayne, they were shooting fireworks at each other,” recalled David Moyes, on [ ... ]
football
From Cantona’s Collar To Robbing Shearer’s Minibar, Razor’s...
Millwall, Saints, Spurs, Liverpool, West Ham. I’m A Celeb, Wife Swap, The Jeremy Kyle Show, Big [ ... ]
football
The Star-Studded Harry Redknapp Podcast Hoping To Raise The...
Get the jam roly polys out of the oven, wind your window down and let all and sundry know that there [ ... ]
football
Get A Core Like CR7 With Two Of Cristiano Ronaldo’s Quick-Hit...
As the winner of 30 major trophies, five Ballon d’Ors and someone who is widely recognised as [ ... ]
football
Finally! The Definitive Book Separating Fact From Fiction In...
The branches of the great royal oak that is football are endless. A continuous weaving narrative, rich [ ... ]
football
British Football’s Greatest Grounds, The Book Celebrating Every...
Great Britain no longer predominantly finds its religion in churches and cathedrals. It’s more [ ... ]
football
Cracking Christmas Gift Ideas For The Fanatical Football Fan...
The footy-mad person you’re buying for this Christmas has probably been kitted out since the summer, [ ... ]
football
Stocking Filler! Believe Us: How Klopp Transformed Liverpool...
Few journalists have followed Liverpool so fervently and passionately over the past several years as [ ... ]
football
With A Wealth Of Talent, The Players Podcast Flips The Script...
A collaboration between BBC Sport and Copa90? Yes please! Totally devoted to the ever burgeoning, ever [ ... ]
football
Jose Mourinho And Mikel Arteta Playing On Reputations Ahead...
It’s fair to say that the reputations of Tottenham boss Jose Mourinho and Arsenal manager Mikel [ ... ]
football
Gareth Southgate Looks To Inspire Next Generation Of Footballers...
There was a time. A most glorious time. Smiling faces congregated closely together in large, open spaces. [ ... ]
football
Andy Cole Shoots From The Hip In His No Holds Barred Autobiography,...
There may be a plethora of sports books being released this winter ahead of the festive season, but [ ... ]
football
Jamie Carragher’s Greatest Games Is The Book Football Fanatics...
Over the past seven years through his stellar television punditry work, one-club man Jamie Carragher [ ... ]
football
The Opportunities Given To Players By Southgate Is Paying Dividends...
Ok, so the Republic of Ireland didn’t lay a glove on them. But England’s performance in [ ... ]
football
Gomez Injury Latest Reminder Football's Eating Itself Whole...
Just when Liverpool thought their defensive crisis couldn’t get any worse, along came the news [ ... ]
football
The New adidas Podcast Putting Premier League Players Through...
Aiming to put some of the fastest players in football through their paces, host Ben Haines has recruited [ ... ]
football
Jurgen Klopp Has To Pick Jota Over Firmino And Not Just Because...
“Football is a simple game made complicated by people who should know better.” Fine words, [ ... ]
football
Goals And Punctures! The Biking Passion And YouTube Vids Of...
The general consensus, whether rightly or wrongly, is that footballers are all about the beautiful game. [ ... ]
football
Schoolboy Defending Leaves Man Utd And Solskjaer Facing The...
It happened again. It keeps happening. Manchester United came up against a well-drilled opposition who [ ... ]
football
Jurgen Klopp's Ruthlessness Has Allowed Diogo Jota To Become...
He’d netted goals in Liverpool’s previous three fixtures, including second-half winners [ ... ]
football
The Fascinating Book That Lifts The Lid On Brazil's Glorious...
“If we had won that game, football would have been different. That defeat for Brazil was not beneficial [ ... ]
football
Covid Can't Stop Ronaldo, Five More Weekend Sport Stories You...
Cristiano Ronaldo is still brilliant, Mercedes are still untouchable and Manchester City are still FA [ ... ]
football
Man United vs Arsenal's Narrative Has Changed But The Fixture...
Manchester United versus Arsenal. You read the fixture and what do you think of? Roy Keane and Patrick [ ... ]
football
Marcus Rashford Captured Our Imagination, He’s Sports Personality...
There’s a storm a brewin’. A Sports Personality of the Year size storm. It might seem like [ ... ]
football
‘The Red Apprentice’ Explores Solskjaer’s Surprising Path To...
To many, Ole Gunnar Solskjaer was a shock choice to relieve Jose Mourinho as manager of Manchester United, [ ... ]