Group C provided the most scintillating moment of this young tournament, when Saudi Arabia shocked Argentina 2-1 earlier today. While that was unforgettable, few will remember Mexico’s 0-0 draw with Poland when this World Cup is at its end. The game was most notable for Robert Lewandowski extending his career-long run without a World Cup goal. He had a gilt-edged chance to secure one, but saw his penalty saved.

Mexico got on the front foot early, playing at a pace Poland couldn’t match. Hirving Lozano whipped in an enticing ball for Alexis Vega, who couldn’t direct his shot. The ever-present threat of Robert Lewandowski did bring a line-breaking pass to Jakub Kaminski, but Jesus Gallardo raced back to snuff out the danger.

Clear-cut chances were in short supply in a cagey opening half. Lewandowski had a header blocked from a Piotr Zielinski corner. That was as good as it got for Poland. Mexico looked the more dangerous of the two teams. Hector Herrera’s cross saw Vega out-jump Matty Cash and direct a header narrowly wide. Wojciech Szczesny kept Poland’s hopes alive with a superb save from Gallardo. But these flashpoints were rare as the game meandered towards half time.

Lozano and Sanchez combined well at the start of the second half, drawing a block from half time substitute Krystian Bielik. Lozano then chanced his arm from distance, but Szczesny held it without incident.

The travelling Polish fans were lifted when Lewandowski tried to bully his way through the Mexico defence. His path was blocked by Hector Moreno, which led to a VAR check for a potential penalty. Both players were physical in their approach, jostling to be the man who reached the ball first. The penalty was given, and only one man was going to step up and take it. 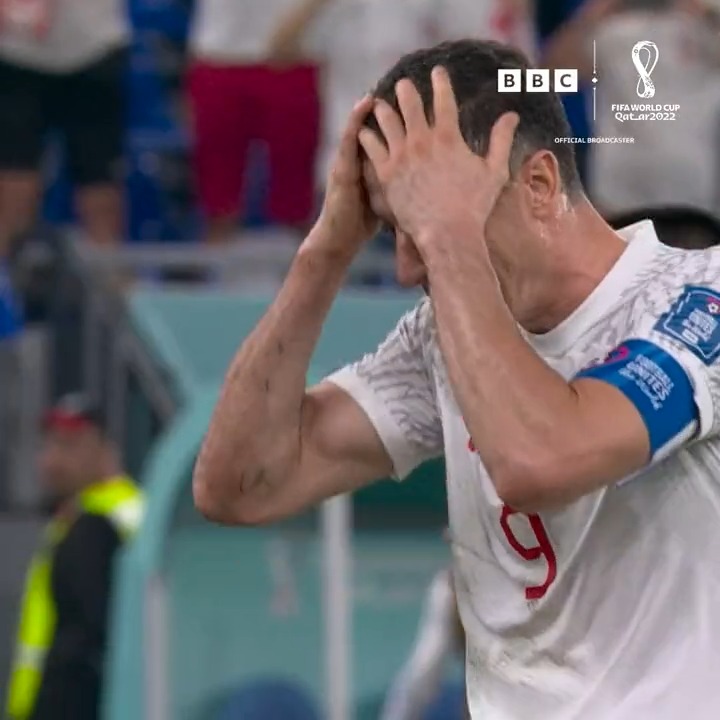 For all the accolades the 33-year-old had collected up to today, a goal in a Fifa World Cup had eluded him. The Barcelona striker stepped up to end that drought and give his side a lead they arguably didn’t deserve. Veteran stopper Guillermo Ochoa was the man charged with playing spoiler. It was a role he relished, diving to his left to deny Lewandowski a dream start to the tournament. Stadium 974 erupted as Mexican fans celebrated like they’d lifted the fabled trophy itself. Could this be the sound of blue touchpaper being lit after a dreary opening near-hour?

Edson Alvarez’s tame shot was met with a header from teammate Henry Martin. It was another close call for El Tri, as they continued to knock on the Polish door. Mexico seemed galvanised by Ochoa’s heroics as they pushed on for an opener.

These efforts were strengthened with the introduction of Wolverhampton Wanderers’ Raul Jimenez. The Premier League striker was roared onto the field by an impassioned Mexican fanbase, in hope that he would be the man to break the deadlock.

The game was given a fair chance to find a decider, even if the seven added minutes were far from the weightiest spell of additional time we’ve seen in this bizarre World Cup. But this was always destined to be goalless, with neither team showing quite enough drive or ambition to nick it. This will surely go down as an opportunity missed, considering Saudi Arabia through this group into disarray by shocking Argentina in the early kick-off. But for now, there’s still everything to play for in Group C.