Football
News
The caretaker boss got a win first up, but the pursuit of a suitable alternative must continue
Joey Mills
13:00, 24 Nov 2021

A new era dawned at Villarreal’s Estadio de la Ceramica on Tuesday night as Michael Carrick’s Manchester United threw off the shackles of the Ole Gunnar Solskjaer era. The Red Devils started slowly before Cristiano Ronaldo found a moment of class late on. Carrick answered the many doubters Solskjaer had collected by doing… exactly what United were doing in Europe under Solskjaer.

BT Sport’s Robbie Savage was incredibly keen to tell you about how Carrick had transformed this United team in his short stay as caretaker manager, while the club looks for a more experienced interim boss. His over-excited hallelujahs about how Carrick had supposedly rung the changes and got the best out of the team rang hollow when, 1) he hadn’t and 2) he didn’t. Sure, Jadon Sancho and Donny van de Beek were brought in from the cold, but United’s attacking approach remained stilted for the most part. The defence had improved, but at times United just dropped into a bank of four and a bank of five, looking more like an FA Cup underdog than a Champions League side.

Carrick had been a key part of Solskjaer’s coaching set-up, as had his assistants on the night Kieran McKenna and Mike Phelan, and it showed. There was an eagerness, in the BT Sport gantry and on social media in the immediate aftermath, to see something that wasn’t there in Spain on Tuesday. But Solskjaer’s side had been getting results like this in the Champions League all season. A stodgy performance followed by a certain Portuguese gentleman unlocking the door. Carrick put about as much distance between himself and Ole as S Club Juniors did between themselves and S Club 7. 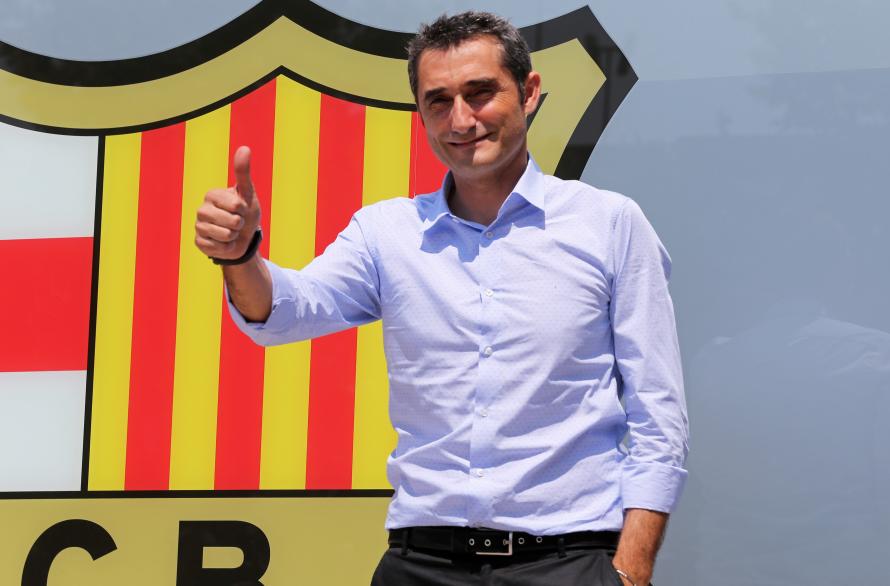 It is important to note that, within the club, Carrick is not seen as the answer. Despite the incorrect labelling of him in some quarters, the former midfielder is very much a caretaker manager rather than an interim one. The club’s search for the latter reportedly heated up last night, with technical director Darren Fletcher said to have spoken to five potential candidates to see United through to the end of the season.

The first name to emerge was Ernesto Valverde. The former Barcelona manager does tick some boxes as a potential candidate. He brings nearly two decades of experience across Europe, with spells at Athletic Bilbao, Valencia and Olympiacos to go with his stay at Camp Nou. He has won trophies, clinching a pair of La Liga titles with Barcelona. Valverde’s victory in the Copa del Rey is perhaps even more relevant, as United are well out of the title race but still have the FA Cup on the agenda. Crucially, he has managed big players with big egos. Working with Lionel Messi is surely the best possible preparation to dealing with Cristiano Ronaldo.

A poor run of one win in five games eventually did for Valverde at the Catalan club, which evokes memories of Solskjaer’s rotten end to his spell in charge. But it should be noted Barcelona were top of La Liga at the time of his departure. The expectations at United would understandably be lower. It is likely to be the permanent manager, expected to be appointed this summer, who will be charged with a title challenge. For whoever takes over as interim, the job will be all about stabilisation. Valverde represents an experienced, steady hand at the tiller for a club in freefall.

On Wednesday morning, the name of Rudi Garcia also emerged as one of the potential managers Fletcher had reportedly spoken to. The Frenchman’s CV does not gleam quite as shinily as Valverde’s, but still warrants respect. Garcia is a three-time Manager of the Year in France, and led Lille to the Ligue 1 title a decade ago. He did a creditable job for three years at Roma, installing a clear style of play and regenerating after a number of key players left. These sorts of fire-fighting instincts would certainly come in handy at an Old Trafford that is perpetually in metaphorical flames.

The Sportsman
@TheSportsman
🔴 @ManUtd are in talks with Rudi Garcia to become the interim manager as discussions about Mauricio Pochettino continue...
0
2

At press time, the names of the other three managers are unknown. Roberto Martinez has been mentioned in passing, but not with enough credulity to comment on at length. What is interesting about the first two names to emerge is that they are far away from the United old boys network. Manchester United seem to produce ex-players who become managers at an alarming rate, but despite public flirtations there has been no mention of the likes of Steve Bruce being interviewed. The club have favoured European coaches with proven trophy success over Bruce, Mark Hughes and Phil Neville. Whether this is an Ole hangover, or a tacit acknowledgement that the club need a higher class of interim coach, it seems like the right call to make.

It is for this reason that it is imperative United don’t overreact to anything Carrick is doing at the club currently. He should be admired for stepping into the breach, but nothing more. As unlikely as it seems, you do wonder whether a shock win over Thomas Tuchel’s rampant Chelsea at the weekend would slow the club’s efforts to find an appropriate interim coach. Even if United do somehow win at Stamford Bridge, the Glazers would do well to note that this current Chelsea only flourished when an out-of-his-depth former player was replaced by an experienced and successful coach.