The final four matches of the first round of the Betfred World Matchplay came to a thrilling conclusion in Blackpool on Monday night with a full house of boisterous darts fans raising the roof at Winter Gardens. Here’s what happened, including the return of the mighty Michael van Gerwen.

Greeted by an atmosphere that will live long in the memory, with a full crowd on their feet, belting out ‘Sweet Caroline’, the clash between two-time major winner Daryl Gurney and ‘The Diamond’ Ian White was certainly a fitting opener to an excellent evening of darts.

The battle between these two was expected to be a close one, and that immediately looked like it might be the case with some excellent arrows from both men early on. It was White who emerged victorious, beating Northern Ireland’s Gurney 10-7, although it was far from plain-sailing. White squandered three darts for victory, only to be handed a lifeline when Gurney returned the favour. At the fourth time of asking, White sank a double six to set up a showdown with Michael van Gerwen. 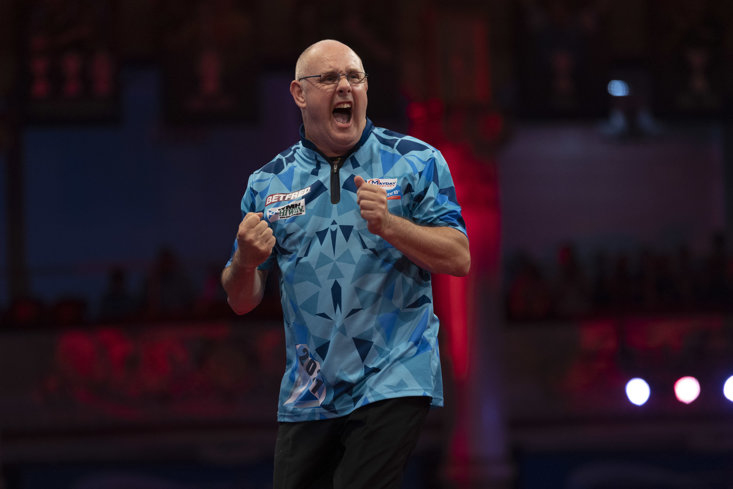 The fireworks kept on coming in the second match of the night between Nathan Aspinall and Mervyn King. The in-form King won his first round encounter with Aspinal in the last Blackpool edition of the Betfred World Matchplay and edged past him in the Masters in January but it was ‘the Asp’ who emerged victorious this time around, beating King 10-6.

It is the Stockport star’s first win at the World Matchplay and he stormed ahead, capitalising on a lacklustre start from his East Anglian opponent and although White almost levelled things up, the younger man was able to keep him at bay, cementing the win with a 72 checkout.

Michael van Gerwen hasn’t had the best of luck in this tournament in recent years and went into tonight’s tie against Aussie debutant Damon Hata without the title of world number one for the first time in seven years.

There was a feeling, after some underwhelming recent form, that ‘Mighty Mike’ might fare better in front of capacity crowds, and the fans certainly did their part, greeting the great Dutchman with an almighty roar. MvG duly delivered against the underdog, although it wasn’t easy at times and Hata certainly had the two-time winner worried.

It wasn’t vintage van Gerwen, but he’s up and running and can’t be ruled out to make it a World Matchplay title number three.

‘The Flying Scotsman’ sailed through into the last 16 and set up a tasty showdown with Aspinall after a convincing 10-5 win over Bunting, in which the 2018 champion scored a 94 average, 11 140s and three maximums. Like van Gerwen, the 50-year-old wasn't at his very best but he always had a hold of the game and never looked like relenting against Bunting.