Football
News
The Chelsea striker is out of favour at Stamford Bridge so far this season
Rebecca Knight
11:45, 27 Nov 2019

Growing up as the middle child, you don’t get scrutinised as much as the oldest. The expectations aren’t as heavy on you, and you’re not adored and babied as much as the youngest one. In fact, if you fall down in the playground, you get a wet blue paper towel to stick over it and you’re fine, because your parents have been there, done that bit of worrying.

Middle kids, as they tell you, can be chronically overlooked through no fault of their own, and that’s exactly how Olivier Giroud, once the star of the very gifable perfume advert complete with wink, and Premier League starter, must feel right now.

Last season at Chelsea, he was the club's star man in their run to the Europa League crown with 11 goals and four assists. Yet it was Eden Hazard who managed to pick up the Player of the Tournament award, to the befuddlement of many. Hazard had only been wheeled out in the latter stages, and even then Giroud was key for Chelsea.

Now, under Frank Lampard, he may as well be sat at home playing Angry Birds on his phone for all the time he’s spending on the field. Yes, no one could have predicted just how well Tammy Abraham would do as Chelsea’s leading man, but as someone who is a born goal scorer, Giroud is well within his rights to feel more than a little bit hard done by. 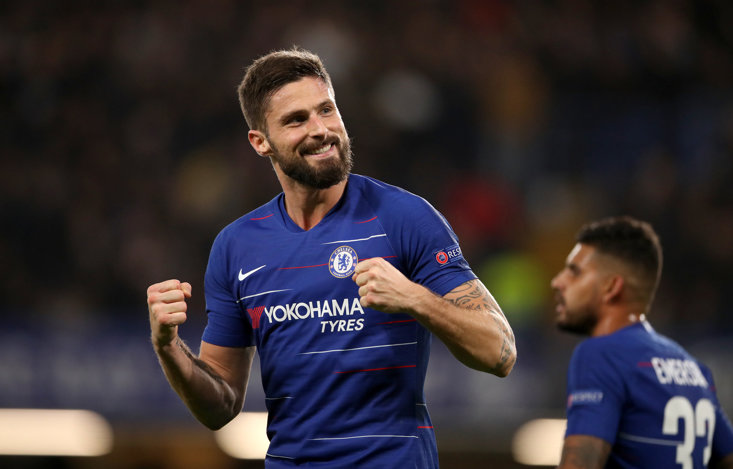 He’s not even getting on the bench in front of Michy Batshuayi most of the time, despite providing a totally different tactical option for Lampard and Chelsea compared to Michy and Abraham. And he has made it very clear he’s unhappy with his situation and will be pushing hard for a move this winter.

His saving grace has been the French national side. Les Bleus have a hugely talented side, but Giroud has still found his way into their squad despite playing very little football this season. Partly due to Karim Benzema being ostracised – but that’s best left for another day and an article post-watershed considering his lengthy list of alleged misdemeanours – and partly due to the fact he plays very well for them and always pops up when they need him.

Lionel Messi and Luis Suarez can’t manage to facilitate Antoine Griezmann, but Giroud can – though of course it helps seeing Griezmann played in his best position. Giroud has been urged to find another club by Didier Deschamps ahead of Euro 2020 – and find one he will.

The fact that Chelsea have priced him at a reported €7-8million will only help his cause – in the modern game that’s a pittance for a top-class striker, and yes, Giroud might be on the wrong side of 30 but he’s a proven goal scorer at home and abroad.

Staying in London is thought to be Giroud’s preferred option, and Crystal Palace are no strangers to giving a new lease of life to Chelsea castoffs, just ask Gary Cahill, who currently resembles peak John Terry, and it could be the ideal move for Giroud. Palace are desperate for goals – especially since Christian Benteke’s nose grows longer and longer each time he claims he can still score goals regularly, and have a solid manager in Roy Hodgson.

In a time when plenty of the established clubs are floundering and the likes of Everton and West Ham are also sinking without trace, Palace could well come in and swoop a very respectable finish come the end of the season. Palace aside, there are plenty of clubs who need goals and could do with a cheap January transfer to tide them over for 18 months, and Giroud will certainly be in demand in the Premier League and abroad, with Inter Milan and Lyon heavily linked with a move for the forward as well.

Giroud might be forgotten at the minute, but he still has plenty to give, and luckily for him, studies have shown middle kids can actually be the most successful in the family.