As soon as the surname Nadal is mentioned, tennis is the first thing that comes to the mind of many people.

Over the past 15 years, Rafael Nadal has established himself as the king of clay. Claiming more ATP titles on the surface than any other player in the Open Era and winning the French Open a record 11 times. While his achievements justify his superior status in the sport, he is not the first member of his family to excel.

Three years before Rafael was born, his uncle Miguel Angel Nadal began what turned out to be a stellar football career in 1983. His journey into the professional league originated in his birthplace of Manacor. Playing for CE Manacor, who participated in the third and fourth tiers of the Spanish league during the 1980s, for three seasons. During the 1985/86, he scored 11 goals in 24 appearances.

At the age of 20, Miguel made his debut in the La Liga for Real Club Deportivo Mallorca. He would end up spending four years with the team between 1987-1991, scoring 22 goals in 122 appearances. His position on the pitch was either defender of a midfielder. One of his biggest achievements whilst with the club was reaching the final of the Copa Del Ray in 1991. The oldest football competition in Spain that was founded back in 1903.

"Miguel Angel was not rough," Rafael told reporters back in 2005. "He was a technical player. I used to go to the stadium all the time to see him when he played for Real Mallorca. And I kicked a ball in the garden with him lots of times."

The biggest achievements of Miguel’s career took place during his time with football giants Barcelona F.C. Playing at Camp Nou for eight consecutive years throughout the 1990s, he was part of the team that won five Liga titles, two Spanish Cups, four Spanish Super Cups, a UEFA Cup Winners’ Cup, two UEFA Super Cups and a European Cup. It was during an era of the club’s history which that proudly described as the ‘dream team.’ Largely overseen by manager Johan Cruyff, who died in 2016.

Miguel made 208 appearances for Barcelona, playing in mainly defensive roles. His aggressive approach was one that got him in trouble. In total, the Spaniard received six red cards. According to bdfutbol.com, only three players have received more red cards in Barcelona’s history. The leader being Hristo Stoichkov with eight. Miguel was also issued with 78 yellow cards.

The physicality of the Spaniard earned him the nickname ‘Beast of Barcelona.’ He was not afraid of taking on his opponents regardless of their shape or size. Although he was never a fan of that analogy.

“Before I played in the European Championship with the national team in 1996, the English put in the newspaper that I was the ‘Beast of Barcelona. That sort of nickname was not right. I was known in Spain as somebody who played elegantly from defence, not dirty at all.”

Regardless of his nickname, which some joked were partly due to his dodgy haircut at the time, he was known as one of the unsung heroes of the team. Along with his popularity came a surge in interest from elsewhere with one of the most notable fans being Alex Ferguson. The former Manchester United boss embarked on a four-week mission to sign Miguel during 1996 but it ended in disappointment.

“I was on the verge of signing," he told The Guardian back in 2001. "I had one foot and a half in Manchester. Everything with United was fine and I was ready to move, but there were problems with Barça and at the last minute they refused to let me leave. I would have liked to play in England. The grounds there have a special character which is different in Spain, and I've got very good memories of Wembley.” 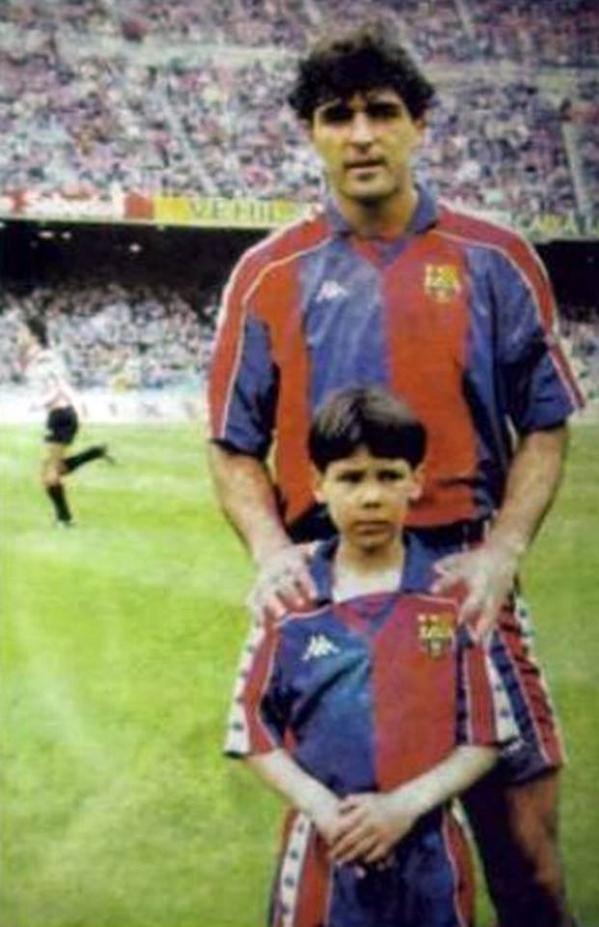 Beyond the national league, the Mallorcan was also a regular fixture in his country’s national team. Miguel’s record includes appearing at three consecutive world cup tournaments between 1994-2002. However, he only managed to score one goal in FIFA-level tournaments out of 26 appearances.

“I spent my first World Cup in the United States. For me, it was a new experience and almost the whole team debuted in that competition. We had an illusion, but we lacked the winning team mentality,” he remembers.

“In the second World Cup, we were practically the same group of people and we had everything. We already had the experience of the previous World Cup, but we lacked the preparation to face the first matches because as the matches went by we were finding ourselves better. In the last one I played we did not lack anything, we had an arbitrator.”

Out of those three competitions, Spain’s best performance was reaching the quarter-finals in 2002 before losing to South Korea on penalties.

At the 1996 European Championships, a missed penalty by Miguel during his country’s quarter-final clash with England proved fatal to their title chances. Spain lost 4-2 on Penalties with Fernando Hierro being the other player to miss.

Living in the shadows of Rafa

Miguel would end his career back with RCD Mallorca. Spending a further six years with the club before retiring in 2005. The same year nephew Rafael won his first grand slam title at the age of 19 in Paris.

It is sad in a way that Miguel’s achievements have been overshadowed by his nephew in the sports world. On the other hand, it is logical. The world No.2 tennis player has spent 196 weeks at the top of the world rankings and has been continuously ranked inside the top 10 since April 2005. He is regarded as one of the greatest player of the sport in the Open Era alongside rivals Roger Federer and Novak Djokovic.

“It does not bother me. I'm delighted. If I have a family member who is doing very well, I am very happy. Rafael is my nephew, he grew up with us.”The former La Liga player said during an interview last year.

“We watched him grow up, playing tennis and football together. We have seen a small boy become professional. Rafael, when he was little, was a different player. He could have predicted that he would be a good tennis player, but he would never know that he would achieve what he achieved in his career. He, along with Federer and other legends, is making history in tennis.”

It is rare that a family can produce one sporting hero, never mind two. Miguel may never be remembered as much as Rafael in the future, but his achievements are ones millions around the world would only wish to achieve.

This is why tennis shouldn’t be the only thing associated with the name Nadal.

More
tennis
40 Years On From Borg, McEnroe And The Greatest Wimbledon Match...
In a match that is widely regarded as arguably the greatest-ever to be played at Wimbledon, Bjorn Borg [ ... ]
tennis
The Tennis Podcast Is All You Need To Get Through The Wimbledon...
Having planned, once again, to broadcast everyday through this year’s Grand Slam tournaments, [ ... ]
tennis
Andy Murray Can Still Compete But Has Nothing Left To Prove,...
Andy Murray knows a thing or two about creating history. The man who became Great Britain’s [ ... ]
tennis
Andy Murray Looking At Miami Open Return After Extended Injury...
Andy Murray is targeting a return to the court at the Miami Open later this month ending his extended [ ... ]
tennis
Maria Sharapova Deserves Respect For Taking Female Earnings...
Maria Sharapova has called time on her glistening career having won every single Grand Slam event and [ ... ]
tennis
Why The Next Month Is Vital For Andy Murray And His Wimbledon...
Sir Andy Murray’s hopes of competing at Wimbledon this year and defending his Olympic title in [ ... ]
tennis
An Open Victory Would Be Huge For Ash Barty, But Even Bigger...
Ashleigh Barty has reached the semi-finals of the Australian Open for the first time in her career following [ ... ]
tennis
Performance Over Outcome: Why Federer Is Still A Beast On The...
The superlative-defying Swiss is at it again. Roger Federer has muscled his way into the Australian [ ... ]
tennis
Mr Shakira And The Multi-Billion Pound Revamp Of The Davis Cup
Premier international tennis tournament the Davis Cup, fast approaching the 120th anniversary of its [ ... ]
tennis
The Young German Ready To Shatter Djok, Federer & Nadal's Ironclad...
Rafael Nadal’s hopes of finishing the season as world number one took a serious blow with a straight-sets [ ... ]
tennis
Here's Why Murray, Djokovic And Tennis's Stars Have Been Confusing...
Andy Murray, Novak Djokovic and the rest of the tennis world have been confusing reporters and fans [ ... ]
tennis
Serena Williams And The Numbers That Have Taken Her To The Verge...
With a straight sets victory over Elina Svitolina, Serena Williams once again stoked fans’ hopes [ ... ]
tennis
Daniil Medvedev: The Moscow Menace Infuriating At The US Open
“Every search for a hero must begin with something every hero needs: a villain.” That quote [ ... ]
tennis
Coco Gauff, Naomi Osaka And Taylor Townsend: Next Generation...
Taylor Towsend stole the headlines at the US Open as the 23-year-old rank outsider knocked out fourth [ ... ]
tennis
Serena Williams v Maria Sharapova: The Rivalry That Tennis Has...
Yesterday’s build-up to the US Open was full of the cliched lines we have heard on repeat for [ ... ]
tennis
Deaf Tennis Player Lee Duck-hee Etches His Name Into The History...
Tennis star Lee Duck-hee cemented his name in the history books at the Winston-Salem Open by becoming [ ... ]
tennis
Novak Djokovic On Course To Ransack Grand Slam Record
Tennis fans around the world are privileged in the current era to witness the most beautiful race for [ ... ]
tennis
Can 2019 Be The Year Of Rafael Nadal?
Rafael Nadal is playing some excellent tennis this year and has bounced back in spectacular fashion [ ... ]
tennis
Is Roger Federer Truly The Greatest Of All Time?
Roger Federer will take to the hallowed turf once again this afternoon to take on old foe Rafael Nadal [ ... ]
tennis
Cori Gauff Must Fulfil Her Huge Potential To Avoid Joining These...
Being a child superstar can be tough. Macaulay Culkin, Britney Spears and more recently Millie Bobby [ ... ]
tennis
Talking Balls: Slazenger’s Long And Illustrious Association...
The name Wimbledon will always conjure-up images of strawberries and cream, champagne, Henman Hill, [ ... ]
tennis
Arthur Ashe: The Only Black Man To Win The Wimbledon Singles...
Arthur Ashe is the only black man to win the singles title at each of Wimbledon, the US Open, and the [ ... ]
tennis
1997 Was The Year Of Martina Hingis: The Greatest Tennis Prodigy...
1997 was an eventful year in the world of sport. Tiger Woods rocketed into wider consciousness after [ ... ]
tennis
On This Day In 2011: Novak Djokovic Wins Wimbledon For The First...
Tennis feels like it's reaching the end of an era as the early days of Wimbledon race by. A golden [ ... ]
tennis
How The Simple Tennis Serve Transformed Into The Most Important...
Wimbledon - the best and most historic tennis tournament in the world got underway today. With two weeks [ ... ]
tennis
Virginia Wade: The Forgotten Champion Who Remains The Last British...
In 2013, Andy Murray ended a staggering 77-year wait for a British men’s champion at Wimbledon. [ ... ]
tennis
Wimbledon 2019: Who Holds The Records At The World’s Oldest...
The 2019 Wimbledon Championships are finally here and it looks set to be one of the most open tournaments [ ... ]
tennis
15-Year-Old Cori Gauff Makes History By Qualifying For Wimbledon...
Aged only 15, Cori Gauff has reached the main draw at Wimbledon for the very first time, and in doing [ ... ]
tennis
How Rafael Nadal Defied Injuries To Stay On Top Of His Game
The fates have conspired to ensure familiar foes Rafael Nadal and Roger Federer will meet in the semi-finals [ ... ]
tennis
Will We Ever See Another Golden Era Of Tennis Like This?
Sport is obsessed with gold. Golden eras, golden generations, golden boots. In recent years it’s [ ... ]
This website uses cookies
Cookies help us and our partners provide statistics. By browsing this website, you consent to the use of cookies in accordance with our Privacy Policy and Cookies Policy.
Accept & Close