Boxing
News
The streaming service will revamp their boxing coverage with a brand-new set of on-air talent and broadcasters
Simon Lillicrap
17:12, 28 Jun 2021

DAZN, along with Matchroom Boxing, have announced a brand-new set of on-air talent and broadcasters which will revamp their boxing coverage after the recent news of their global five-year deal to cover the sport worldwide.

The biggest coup for the streaming platform has to be British broadcasting icon Mike 'the voice of boxing' Costello, who will now be the lead commentator on DAZN and brings seven Olympic Games worth of experience from the BBC, as well as 15 years covering the major title fights around the world. In terms of boxing, it doesn’t get any better than this.

“I’ve had such a great time at the BBC for so long that I’ve always said it would take something special to persuade me to leave that role and I get the impression this is that something special,” Costello commented.

“I love the energy, ambition and passion around this new venture with DAZN and Matchroom. From black and white television, Boxing was one of the most popular sports where televised sports were growing. We then moved into the PPV and satellite era. Over the decades boxing has tended to move with the times in the media landscape and I think this is the next step of that journey.” 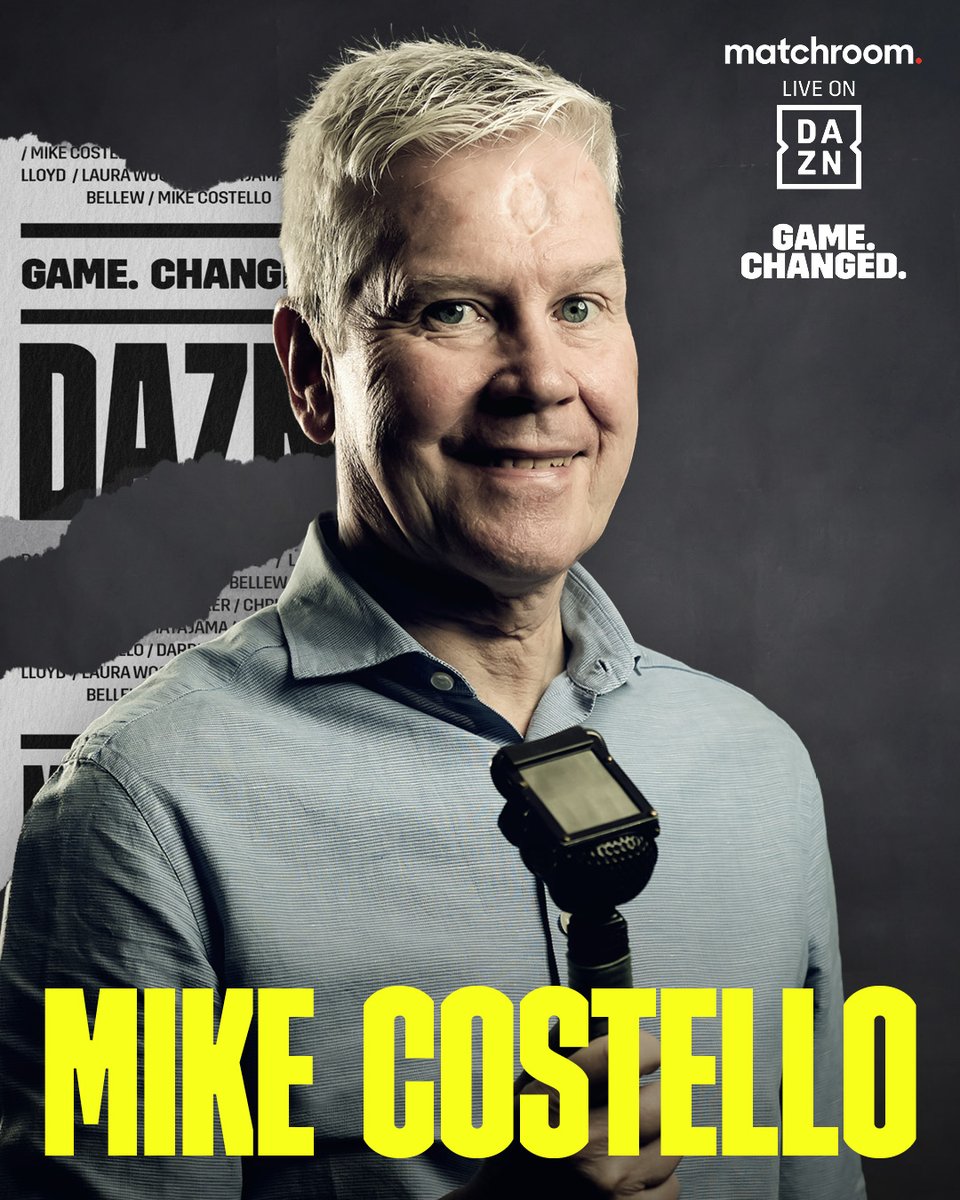 Joining Costello is Maya Jama, one of the UK’s most influential celebrities who comes in with sports presenting experience. She is currently co-hosting Peter Crouch’s Year-Late Euros, hosted the Save Our Summer series in 2020 and started out on YouTube channel Copa 90, while more recently she has been the voice of several hit shows across the BBC, ITV and Channel 4.

“I couldn’t be prouder of this team of talent that we have assembled for our ground-breaking new project,” promoter Eddie Hearn commented. “The launch of Matchroom Media has enabled us to form a cradle to grave mindset across inception to completion of our shows so we can deliver the live event experience to the viewer in the narrative and style in which we have built it.

“It’s a real mixture of industry legends and fresh new talent that will give us the credibility and the energy to drive this new era forward. Mike Costello has long been the fan favourite for live boxing commentary, and we are honoured to welcome him to the team. Maya Jama is now one of the leading broadcasters and personalities in British television, and brings a great new perspective to the audience, as a boxing fan and well-known sports presenter. We can’t wait to get started with Fight Camp next month!” 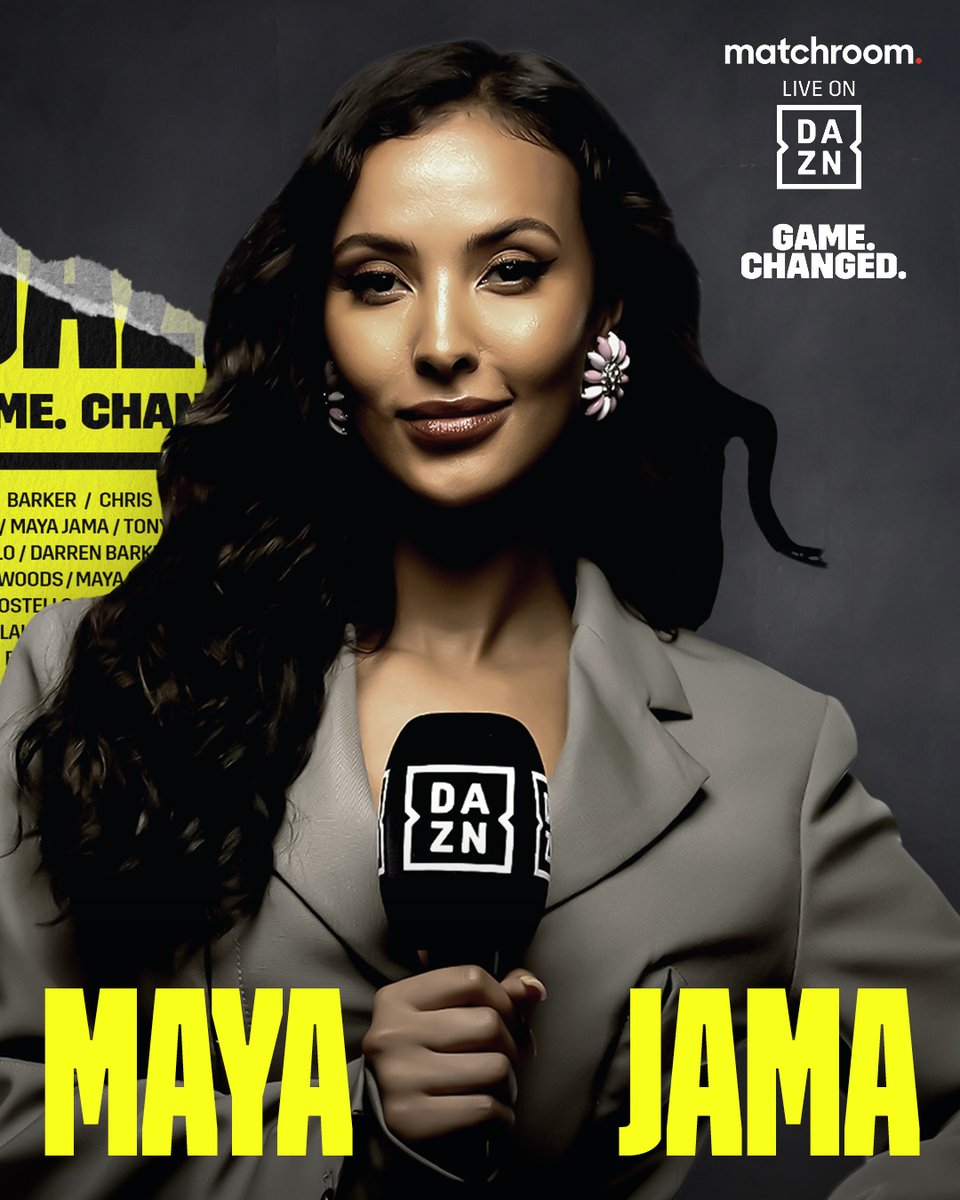 Back to boxing and former WBC Cruiserweight World Champion Tony Bellew has been signed up. He has carved out a career as a cracking pundit having seen and done it all in the sport, while his personality shines through. When it comes to knowing the ins and outs of the sport, having only retired in 2018, Bellew provides an insight which few others can offer.

This brand new team will kick off their career on DAZN with the second instalment of Fight Camp, which will take place at Matchroom HQ over three successive weekends, starting on July 31. DAZN’s boxing coverage has made huge progress since launching in 2018, and this latest set of recruits are sure to put them amongst the elite when it comes to boxing coverage worldwide. Costello alone is worth the £1.99 per month introductory offer available to UK viewers.

x
Suggested Searches:
Manchester United
Liverpool
Manchester City
Marcus Rashford
Premier League
More
boxing
Crawford Ordered To Fight Shawn Porter, Five Boxing Stories...
Terence Crawford finally has a fight in the pipeline, Logan Paul is targeting another legend of the [ ... ]
boxing
Joyce Should Forget The Winner Of AJ vs Usyk And Focus On Dangerous...
After a disappointing few months in the heavyweight division that saw a potential super fight between [ ... ]
boxing
Barry Hearn Says He Is ''Doubtful'' Anthony Joshua Will Ever...
President of Matchroom Boxing Barry Hearn has said he is doubtful that Anthony Joshua will ever fight [ ... ]
boxing
Usyk ''A Better Boxer'' Than AJ, Warns Former Olympian Anthony...
Oleksandr Usyk is a “better boxer than Anthony Joshua” and has the tools to beat the British [ ... ]
boxing
Why Oleksandr Usyk Could Prove To Be AJ's Toughest Opponent...
Before Anthony Joshua’s shock Madison Square Garden defeat to Andy Ruiz Jr in June 2019, there [ ... ]
boxing
Meet The Team GB Boxers Hoping To Strike Olympic Gold In Tokyo...
The landscape of Olympic boxing in Britain has changed in the last two decades, with medals now an expectancy [ ... ]
boxing
Spence Better Than Mayweather Says Pacquiao, Five Boxing Stories...
With highly-anticipated rematches, terrible tattoo bets and reignited rivalries, it’s been another [ ... ]
boxing
Josh Warrington Promises Revenge Over Mauricio Lara In September...
Josh Warrington will have the opportunity to avenge his sole professional defeat when he takes on Mauricio [ ... ]
boxing
Deontay Wilder vs Tyson Fury III Postponed, Five Boxing Stories...
Tyson Fury’s plans for 2021 have taken a further blow, Oscar De La Hoya wants to mix it with his [ ... ]
boxing
Ebanie Bridges On Breaking Down Barriers And Stereotypes Within...
Ahead of her showdown with Bec Connolly at Matchroom’s Fight Camp in August, Australian bantamweight [ ... ]
boxing
Riddick Bowe Set For Ring Return, Five Weekend Boxing Stories...
Jamel Herring and Shakur Stevenson could be in line for a super-featherweight showdown at the end of [ ... ]
boxing
Anthony Joshua Will Face ''Toughest Usyk We Could Ever See''...
Anthony Joshua will be facing a “real heavyweight” when he defends his world titles against [ ... ]
boxing
Josh Taylor On Nearly Quitting, Five Boxing Stories You Might...
Following a bumper weekend of boxing that saw Gervonta Davis, Vasiliy Lomachenko and Julio Cesar [ ... ]
boxing
Three Heavyweight Bouts Announced For Tyson Fury v Deontay Wilder...
With just over four weeks until Tyson Fury and Deontay Wilder share a ring for the third time, [ ... ]
boxing
From Hammering Holmes To Blitzing Berbick: Mike Tyson’s Five...
Like the eye of a tornado, there was a destructive beauty to Mike Tyson’s primal prowess [ ... ]
boxing
Lomachenko Back With A Vengeance, Five Boxing Stories You Might...
Gervonta Davis came through a tough test thanks to some help from Floyd Mayweather, Vasyl Lomachenko [ ... ]
boxing
What To Expect As Vasyl Lomachenko And Gervonta Davis Return...
Vasiliy Lomachenko v Gervonta Davis is a match-up that has long been talked about, by both boxers as [ ... ]
boxing
Time To Deliver As Chris Eubank Jr Promised World Title Shot...
Six months after signing with promoter Kalle Sauerland, Chris Eubank Jr has been promised “world [ ... ]
boxing
De La Hoya Targets Mayweather Rematch, Five Boxing Stories You...
Oscar De La Hoya wants a rematch with Floyd Mayweather, Jake Paul has his sights set on fighting for [ ... ]
boxing
''KO King'' Gervonta Davis Backed For Stoppage Win On Super-Lightweight...
Gervonta Davis steps up to 140lbs this weekend when he takes on fellow unbeaten American Mario Barrios [ ... ]
boxing
Chavez Jr Beaten By UFC Legend, Five Weekend Boxing Stories...
The son of one of boxing’s greatest stars was outclassed by an icon of the Octagon, Naoya Inoue [ ... ]
boxing
Joe Joyce To Face Carlos Takam In July, Five Boxing Stories...
Awkward face offs, heavyweight showdowns and another important step for the advancement of women’s [ ... ]
boxing
Inoue, Charlo And Munguia Top A Bumper Weekend Of Boxing
Teofimo Lopez may not be fighting this weekend after testing positive for Covid-19, but there remain [ ... ]
boxing
From Rocky Road to Richards: Fielding On Canelo, The Caymans...
It was a surreal moment when Lerrone Richards crooned ‘Hot Cross Buns’ down a Sky Sports [ ... ]
boxing
Matchroom Fight Camp Returns With Conor Benn Headlining Opener
Eddie Hearn and Matchroom Boxing have announced the return of Fight Camp this summer with Conor Benn [ ... ]
boxing
Claressa Shields Wins On MMA Debut, Five Boxing Stories You...
Claressa Shields crossed over to MMA and won, Billy Joe Saunders is considering retirement after his [ ... ]
boxing
Daniel Dubois Targeting World Heavyweight Title, And Wants Joe...
After Daniel Dubois’ successful return at the weekend in stopping Bogdan Dinu inside two rounds, [ ... ]
boxing
Third Time Lucky - Emotional Frazer Clarke Finally Secures Olympics...
After securing a place at this summer’s Tokyo Olympics, Frazer Clarke becomes the latest Team [ ... ]
boxing
Logan Paul-Floyd Mayweather: Where Will The Farcical Celebrity...
No judges. No official record of the fight. No winner. Unless of course, you are Floyd Mayweather, who [ ... ]
boxing
How Logan Paul Went From The Internet's Biggest Disgrace To...
On December 31 2017, Logan Paul uploaded a video that would make him the internet’s number one [ ... ]