Us Sports
News
Back-up QBs stole the show as Brady struggled against the Saints once more
Sam Penfold
15:40, 01 Nov 2021

It was the back-ups who stole the show in week 8 of the NFL season, with rare opportunities to star being snapped up by multiple quarterbacks. For Tom Brady, though, it was the same old story against the Saints.

Mike White stepped up at QB for the New York Jets this weekend and led them to just their second win of the season against a Cincinnati Bengals side who very few expected them to beat. The Bengals had been in fine form heading into Sunday’s clash with the Jets and with New York having to deal with an injury to young QB Zach Wilson, all signs appeared to point towards a Bengals victory.

But back-up QB White hadn’t got the memo. In fact, he decided he was going to write the script himself. He had the best throwing game of any Jets QB since 2000, throwing three touchdowns and completing 37 of 45 for a total of 405 yards in a 34-31 victory. White became just the second ever QB to throw over 400 yards in his first career start, a feat only bettered by Cam Newton. His 37 completions also put him joint-third in Jets franchise history.

Until Sunday night, back-up QB Cooper Rush had more years (five) as a Cowboy than he did passing attempts (three). He hadn’t thrown a pass in the league since 2017. But, after Sunday’s 20-16 win over the Minnesota Vikings his stats now look more respectable as Rush went 24-40, throwing two touchdowns for a total of 325 yards. With starting QB Dak Prescott ruled out last minute, Cowboys fans were sweating over their chances of maintaining their fine form. But Rush didn’t look phased as he calmly went about his business as if he’d done it a hundred times before. His clutch touchdown pass to Amari Cooper with just 51 seconds left on the clock was a fantastic way to seal a win Rush thoroughly deserved. The Cowboys extended their win streak to six and are now 6-1 for the season.

Tom Brady is usually so confident, so steady, so assertive in the pocket. He can pick out incredible passes, dictate the flow of the game against almost every side he comes up against. Yet he appears to struggle whenever he’s faced the New Orleans Saints in the regular season.

On Sunday, when his team needed him to march them down the field he threw an uncharacteristic interception that resulted in a pick-six and cost Tampa their shot at a win as they went down 36-27 at the Raymond James Stadium. Astonishingly, Brady has now thrown a startling eight interceptions in four games against the Saints compared to 19 interceptions in 24 matches against all other teams since arriving at Tampa.

The Detroit Lions are really bad

Okay, you might have seen this. It’s highly plausible that you’ve come to this conclusion yourself, but in any case it's worth pointing out. Detroit Lions are currently 0-8 for the season and suffered their heaviest defeat of the year so far on Sunday as they lost 44-6 to the Philadelphia Eagles.

Although the coaching staff are being credited with trying to be successful on trick plays, they simply aren’t very assured on defence. Offensively, QB Jared Goff looks terrified in the pocket and doesn’t seem very switched on during games, especially after he threw the ball out of bounds on fourth down this weekend. They seem to be tanking this season to better themselves in the draft, and by the looks of things they need all the help they can get.

Calvin Ridley steps back from football 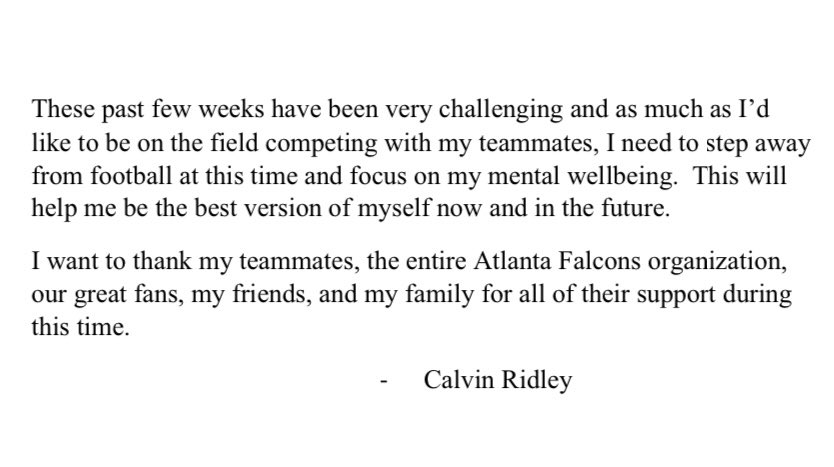 Atlanta Falcons wide-receiver Calvin Ridley announced he will be taking time away from the sport to focus on his mental health. After being absent a few weeks ago due to personal reasons he sat out of this weekend’s game against Carolina Panthers and released a statement after he was ruled inactive.

This announcement has been met with some truly heartless comments and it’s worth pointing out that just because athletes are paid big money it doesn’t make them any less human than anyone else. We hope that Calvin gets the help and support he requires and returns whenever he feels ready to do so.