It’s not like we haven’t seen AC Milan and Inter finish first and second before. Only last season, when the Nerazzurri won their first Scudetto in 11 years, Milan were just behind them on the podium.

There was also that time in 2011 when Milan ended their own seven-year drought, with Inter coming in just behind. But in each case over the last few decades there was a clear leader. One was dominating, the other watching on.

In 2020-21, Romelu Lukaku, Lautaro Martinez et al were storming to the title under Antonio Conte in the blue and black while Milan scrambled into second spot after a lengthy battle with Atalanta, Juventus and Napoli as the season drew to a close. Ten years earlier, Milan were the clear superior force with Zlatan Ibrahimovic, Robinho, Alexandre Pato and Antonio Cassano showing they had far too much for an Inter side who had lost significant ground in the first half of the campaign under Rafa Benitez.

Not since the end of the 1992-93 season have the two Milan rivals battling intensely for the Scudetto going into the last few games. And oh, what teams they were back then.

Under Osvaldo Bagnoli, Inter were spearheaded by the freescoring Uruguayan Ruben Sosa, whose 22 goals were key in a season which saw star signings Darko Pancev and Salvatore Schillaci fail to make a real impression. Elsewhere they boasted a swathe of superstars, from Walter Zenga in goal to Beppe Bergomi and Luigi De Agostini in the back line, with Matthias Sammer – Germany’s ace midfielder-cum-sweeper, Nicola Berti and Igor Shalimov higher up. 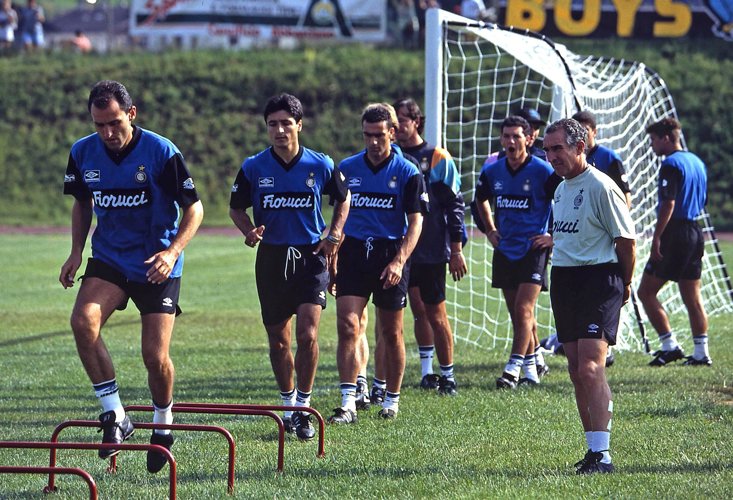 But across San Siro stood an absolute giant of the game. Milan began the season on a 35-match unbeaten run in league play, their last defeat having come against Bari in May 1991. Fabio Capello, a full year into the job, had never been on the losing side as Rossoneri coach. And when he had a squad filled with talent such as Marco van Basten, Frank Rijkaard, Ruud Gullit, Franco Baresi, Paolo Maldini and Jean-Pierre Papin, it was clear they were going to be the title favourites.

They played their part in some stunning games early in the campaign, coming from 4-2 down at Pescara – with Baresi scoring two own goals – to win 5-4 thanks to a Van Basten hat-trick, with the first eight goals coming in the first half. They then beat Fiorentina 7-3 and Lazio 5-3 in successive fixtures as they threw off the shackles to deliver some of the most compelling matches anywhere on the continent.

And they looked to be absolutely bossing the title again by mid-March, having extended their unbeaten run to 58 matches and opened up an 11-point lead on second-placed Inter with 11 games to play. With wins still worth just two points in Serie A at that point, it was a long way back for the Beneamata.

But Inter gave it a fair old crack. After Milan were finally beaten by Parma at San Siro in the middle of a run of seven winless matches, their neighbours made up ground quickly with six wins over the same period. Schillaci finally started chipping in with key goals, scoring twice at Sampdoria and one each against Ancona and Lazio as Bagnoli’s side started to believe.

Having got to within four points of Milan with four games to go, that was as close as they got. Despite the Rossoneri drawing all of their remaining games, Inter wobbled too. They drew with Genoa and Foggia to give their rivals the chance to finish it off with a 1-1 home draw with Brescia which saw both sides go through the motions as Milan were crowned champions again and the visitors took the point they needed to secure safety.

This season, there could be twists in the tale yet. Inter are two points adrift of Milan, who have four games left, but Simone Inzaghi’s men go to Bologna on Wednesday night in a game which looked set to be awarded to them back in January. The Rossoblu had been victims of a Covid-19 outbreak, and Inter turned up for the match believing Bologna’s no-show would see them handed a 3-0 win, only for the league to decide later that the match would be rearranged.

Throw in Milan's potential takeover on Friday by Bahrain investment group Investcorp, whose members reportedly include ownership figures from Manchester City, and this particular Scudetto race has plenty of legs in it. It might not involve the blockbuster names of the respective squads in 1993, but Milan and Inter going neck and neck remains as box office as ever.