A petition to change the NBA logo to a silhouette of the late Kobe Bryant has now been signed by almost three million people, and that number is still climbing. It was started by 16-year-old Canadian Tyvon Fettuccine, who had small ambitions for his idea to change the NBA to feature the LA Lakers legend.

“My original goal was to merely get one hundred signatures I didn’t expect anything to come out of this. Less than a day later we now have over 250,000 signatures,” he tweeted just two days ago, now it has more than ten times that number.

The current NBA logo features another Lakers legend and Hall of Famer Jerry West as the white silhouette on a background of blue and red. This now-famous logo has reached its 50th anniversary and was designed back in 1969 by the NBA as a way of establishing themselves as the number one basketball brand in America.

They were under threat from the American Basketball Association and got in touch with the founder of Sigel+Gale, Alan Siegel. The story goes that Siegel was flicking through photographs in Sport magazine looking for some inspiration when he saw the upright action image of Jerry West dribbling with the ball for the Lakers. In his eyes, it captured the essence of the game and was the perfect fit for the new logo.

This image, now worth $3 billion-per-year in licensing is used everywhere, although the NBA themselves have been reluctant up until now to admit it is West in the logo. However, Siegel himself has confirmed it is the all-time great and believes he knows why the organisation take that official position. He told the LA Times in 2011:

“They want to institutionalize it rather than individualize it. It’s become such a ubiquitous, classic symbol and focal point of their identity and their licensing program that they don’t necessarily want to identify it with one player.” 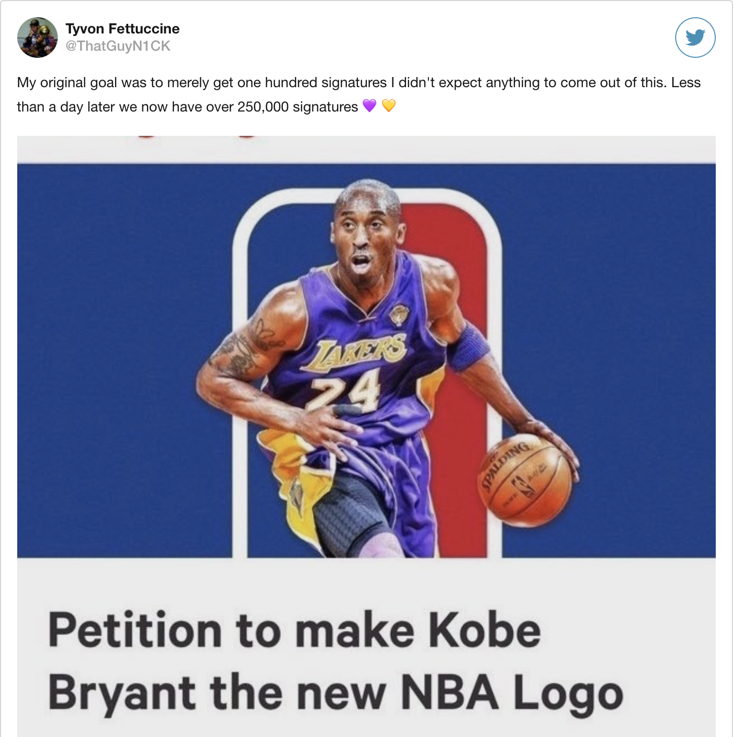 West mentored a young Bryant and at his peak was part of the legendary pre-draft workout that led to the Lakers drafting the precocious young talent. Playing offence, up against five-time NBA champion Michael Cooper on defence, West instructed Cooper to be physical and work the young man. Bryant stood up to the challenge and showed his skill against one of the greats of the game, convincing the Lakers he had everything needed to make it to the top.

Cooper spoke on BBC 5 Live’s breakfast show about the potential logo change and how it would mark a passing of the torch between two true greats.

“Jerry West had the innate ability to spot talent or pick up players that nobody knew about. West, a great player in his own right and his own standing in the Lakers’ history, had the ability to pick this young man [Kobe] and he knew he was going to be a legendary player.

“Wouldn’t it be fitting for Jerry to have picked this young man and is now passing it to Kobe, passing the torch and let Kobe take it to another level because basketball from the time Jerry played to the time I played, to the time Kobe played is a whole different level.”