Unless you've been hiding under a rock, you'll know that England face South Africa in the Rugby World Cup final in Japan on Saturday. The culmination of a fantastic tournament, Eddie Jones' men go in as firm favourites, following an awesome display to beat the All Blacks in the semi-final.

The South Africans haven't set the tournament alight but they've got to the final through sheer power and grit. The two teams met in the 2007 final, the Spingboks winning 15-6 in a try-less affair in Paris.

We can expect more from Saturday's final, but if England are to win their second William Webb Ellis trophy, adding to the title they claimed in 2003, then these are the star South African performers they'll have to contain...

Tall, strong and quick, de Allende is the complete package. It was his try that sunk Wales in the semi-final and England will need to keep a close on the centre from Cape Town.

At 27 years old, he is one of the most dangerous attacking weapons South Africa possess. He busts tackles, can speed past opponents or put his teammates through holes with his passing games. For the past five years he has been a mainstay of the Springboks set-up.

de Allende made his name with the Stormers in Super Rugby before earning his first cap in 2014. Now playing in Japan, the centre has been on fire in this World Cup. A regular in magazines like GQ and Men’s Health, the outside back is not just a pretty face but one who hits hard in defence as well. 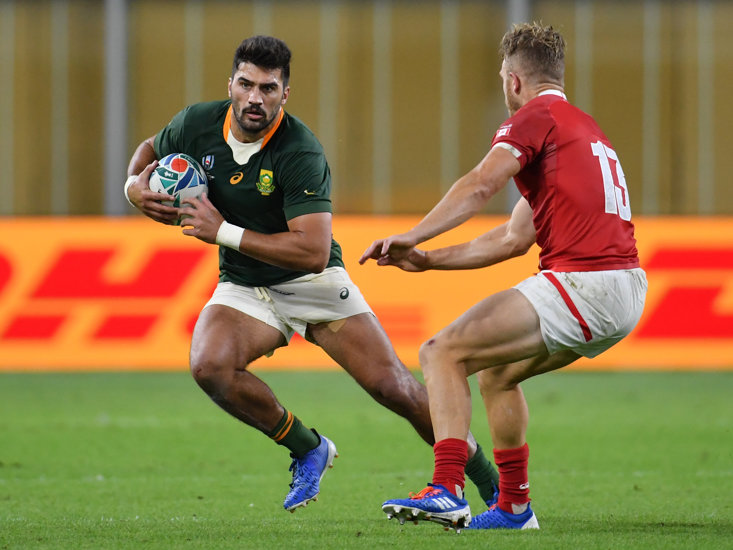 Like de Allende, le Roux is a massively talented attack machine. The 30-year-old from Stellenbosch is a classy fullback but has also played on the wing and at number 10, such is his varied skillset. Few can bamboozle defences like Le Roux can. He can zing 30-metre passes from one side of the field to the other and has one of the best dummies in world rugby.

A great stepper, Le Roux has played 59 times for his country. As a try-scorer and try-creator, the fullback has few peers. England will know him well after his stint with Wasps from 2017 until May this year.

While le Roux’s form has not been at the highest in Japan, underestimate him and his skills at your peril. Nicknamed ‘Majaivane’ – which loosely translates to “the one who’s always dancing”, le Roux is a real livewire.

Like Wille le Roux, de Klerk is well known by Eddie Jones’ side. For the past two years he has played his club rugby in England with Sale Sharks, and since 2016 he has been a Springbok.

The tiny scrum-half, who stands just five feet and seven inches tall, is a jack-in-the-box. He is the brains and the heartbeat of this South Africa side. With his distinctive mane of long blonde hair and his stocky build, de Klerk will be ready to box-kick England to death.

Dubbed 'Mini Hercules' because of his tenacious style of play, the 28-year-old has thrived playing in Premiership Rugby. Described from rivals as ‘an annoying lapdog’, de Klerk is the man often opposing fans love to hate. Confident and talented, he is the key cog in Rassie Erasmus’ outfit.

Only Josh Adams has scored more tries at this World Cup than Mapimpi. The winger is a lighting-fast outside back who has the dazzling feet that could destroy England.

It was his two tries that sent Japan packing at the quarter-final stage. Mapimpi could be described as a late bloomer, as he only made his Springbok debut last year and has just 12 caps to his name. But the 29-year-old is a try-scoring machine who has bagged an amazing 13 tries in just those 12 games, and simply can’t be ignored.

With his bald head and moustache, Mapimpi is South Africa’s top attacking threat with Cheslin Kolbe sidelined. The winger has also overcome severe personal trauma to make it to this final. Mapimpi has lost his mother, sister and brother through a car accident and illness, and overcame a poor upbringing to make it in the world of professional rugby.

Big, strong and tough, Etzebeth is not someone you would want to run into in a dark alley. And standing at six foot 8 inches, and weighing in at 271 pounds, it’s not hard to see why. Etzebeth is just a giant of a man who smashes his opponents into the ground.

He is aggressive and physical, and is the leader of the South African forward pack. The lock always leads the way for the Springboks, taking the tough carries that are needed, and England will need to limit his impact. A teenager star, Etzebeth made history when he reached 50 caps for his country at the age of just 24.

Now 27, he already has hit 83 appearances. A workhorse, an enforcer and someone who gets under the skin of the opposition, the forward has arms like tree trunks and biceps the size of mountains. England will need to somehow stop South Africa’s version of Martin Johnson.